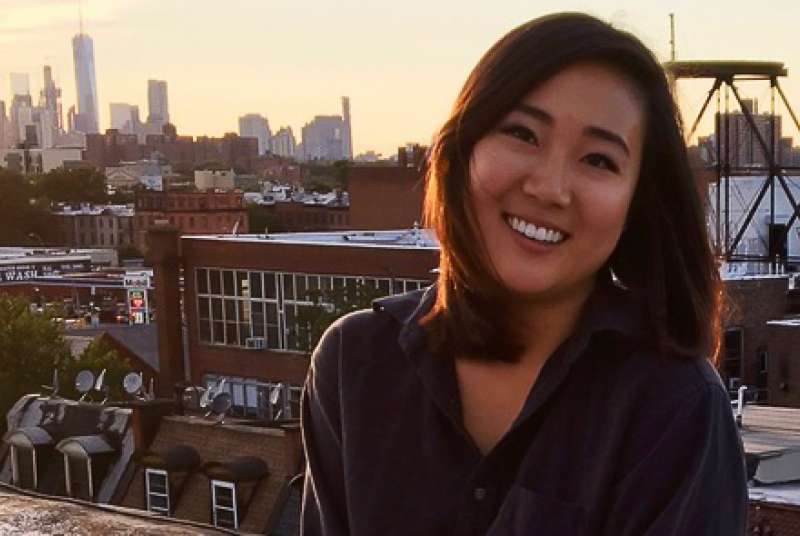 Laura Sim ’16, audio producer and reporter at The Wall Street Journal’s “The Future of Everything,” talks podcasts and shares a few of her favorite shows.
James Napoli | Jan - Feb 2018

Laura Sim has worked in various capacities on a few of the most popular podcasts in recent years, including Millennial, The United States of Debt, Crimetown and The Future of Everything. Here she discusses the path that took her from starting Dartmouth’s version of This American Life to combing through FBI wiretap recordings to her current job as an audio producer and reporter at The Wall Street Journal. BONUS: Sim shares her favorite podcast recommendations.

Tell us about the show you developed as an undergrad, This Dartmouth Life.
I started the show during my junior year. It was based on its namesake, This American Life, as a narrative documentary series about Dartmouth culture, its students, professors, administrators and everyone in between. We hosted several open-mics where people could tell stories relating to a certain theme. We also produced some feature stories that we thought sounded great at the time. Looking back, they were such fledgling attempts, and I was still trying to figure out how to tell a story. Those first episodes were pretty bad.

One of the episodes that got a lot of attention was called “Admitted.” We took inspiration from a group of students at Stanford who visited their admissions office and requested to see their college applications and the committee’s comments. We encouraged students at Dartmouth to do the same—to visit McNutt, view what admissions officers had written about their applications, and then we interviewed them afterward. We tried to experiment with investigative journalism, too.

What did you learn?
I wasn’t doing it for a byline, a salary or a resume. I was doing it all for fun, after I finished homework for my classes and during breaks between terms. Even though I had friends helping me, I didn’t have access to experienced reporters, sound designers or editors, and in that way, my time making TDL was just so exciting. There weren’t any rules to break. I wasn’t beholden to any supervisors. And there was such a joy about it all, because I wasn’t afraid to make mistakes.

Did that change once you started working at the podcast Crimetown?
Crimetown was about the mafia in Providence, Rhode Island, and it was made by the same brilliant guys behind The Jinx. This is where things got difficult. At Dartmouth, I was getting along nicely working in my own little world, but, all of a sudden, I found myself at this company specializing in really high-quality narrative podcasts. The standards were high, the content was gritty and, for a recent grad, the hours felt long. I learned what it meant to not be the brightest and loudest in the room.

What did your role as associate producer entail?
One of the highlights of my time there was listening to hundreds of hours of FBI wiretaps in search of that perfect moment that would make our story sing. Another one was putting on a live show featuring mafia members who were now well into their old age. They’re very nice people, especially when they’re old. Before Crimetown, I didn’t even know what it meant to “be packing,” or what it means to have a key of a certain drug. Learning moments, right?

Tell us about The Wall Street Journal’s podcast division.
Right now, we’re working on season two of The Future of Everything. We’ve explored everything from urban farming to cryptocurrency to smart guns to antibiotic resistance. I love the rush that comes with working in a newsroom. I like how high stakes everything feels all the time. I’m learning, more than ever, to slow down and check my work because there isn’t room for mistakes. It’s the coolest thing to be able to work with print reporters and bring their stories to life in audio form, too. The other reason I’m excited to be at WSJ is because they’re very new to podcasts, so there’s lots of room to grow, experiment and just own your projects.

LISTEN: The Future of Everything, “In Bitcoin We Trust” (23 minutes)

Could you describe a typical day producing The Future of Everything?
In the morning, I see what interviews or field recordings we have scheduled for the day. Let’s say we’re reporting a story on the future of quantum computing, which is one of our upcoming episodes. We conduct the interview, go through that recording—which we call tape—to find the best parts, and then we write them into a script. Our sources can be industry experts, researchers, government agencies, but we also pull a lot of tape from our newsroom. After we write the script, we narrate it all in the studio, cut the tape, score it, and add our touches of sound design. It’s like making a documentary or mini-movie every other week.

What are the challenges of working as a journalist in the medium of sound?
At the WSJ, podcasts are still a new animal, and our editor is actually WSJ Magazine’s editor. The structure of magazine stories is so different from that of narrative longform radio pieces. Making radio stories is closer to making documentaries than it is to writing print stories.

What advice would you give to anyone interested in audio journalism?
First, get comfortable speaking into a mic, and don’t let the power dynamics of a situation pressure you into saying something you might not otherwise. Second, just because you work in journalism and media doesn’t mean you don’t deserve benefits like health insurance, membership in a union, vacation days and the opportunity to make what you deserve. Third, get comfortable with negotiation—you’ll be negotiating pay, which stories you get to work on, how much time you get to complete these stories, and pretty much everything else. Fourth, fifth and sixth: don’t work for free. Value yourself more than that. Check out episode #24 of the podcast Millennial if you want to hear how I learned that the hard way.

Are you producing any other podcasts?
I’m working with an editor on a project about epigenetics, trauma, and translation after recently finding out about a dark corner of my family’s past during the Korean War. You can be on the lookout for it in mid-2018.

If you’re into journalism, Longform.

If you want to laugh out loud, listen to Tapped by Feral Audio or Whatever Happened to Pizza at McDonald’s (the latter is an incredible work of art).

If you’re a cheeseball for romance like I am, you’ll love Dear Sugars, Why Oh Why and Modern Love.

There’s an endless amount of crime shows–my favorites are Criminal, Crimetown and Serial.

I love interview shows like Death, Sex and Money and Fresh Air with Terry Gross.

If you’ve recently graduated from college, check out the first season of Millennial from Radiotopia.

For tech, listen to Reply All and The Future of Everything.

The dailies from WSJ podcasts: What’s News, Minute Briefing, Your Money Matters, Tech News Briefing are just some of them, and they’re all good.