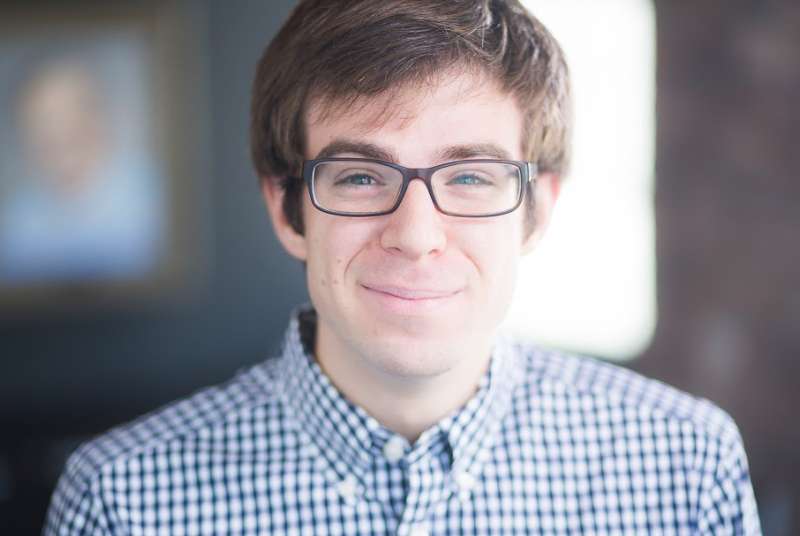 Mike Gillis ’12 produces fake news for a living. During the past four years the former DAM intern and Jacko editor-in-chief has published hundreds of headlines and articles as a staff writer for satirical news outlet The Onion. His work has also appeared in The New Yorker and on the websites ClickHole, College Humor and McSweeney’s Internet Tendency. Here Gillis shares a behind-the-scenes look at the country’s premiere farcical news organization and reflects on how his job, surprisingly enough, has become more difficult following the election of President Trump.

When did you first get interested in writing comedy?
I got a copy of The Onion from a friend in middle school and it hit me immediately: This is what actual life is like. It’s not literature in the sense of something grand and poetic, and it’s not the mundane description of politics, which newspapers do. It’s what an average American encounters every day—the little decisions that actually make up a depressingly large chunk of your life. You read it and recognize yourself in it.

How did your time at Dartmouth influence your career path?
I started writing a lot of comedy my freshman year. Ernest Hebert was my first creative writing professor and, later, my thesis advisor. He called me over after class one day, pointed to a line I had written and said, “That’s great stuff.” It sounds like nothing, but I flew out of that classroom. I was just ecstatic.

I became editor-in-chief of the Jacko my junior year. It was a chance to experiment because the stakes were so low, and it was satisfying to make my friends laugh. That was enough to make me realize that this was something I was interested in doing long-term. I also studied cognitive science, because I thought there’s no way I could write for a living. It was a total pipe dream. I remember thinking, I’m not going to be a writer for The Onion, I’m not going to write novels for a living, I’m probably not going to get a job as a reporter, so I might as well have a backup plan.

And then you ended up becoming a staff writer for The Onion.
I applied to the fellowship program, which is the entry point for becoming a staff writer, and I also applied for an internship. I didn’t get either. I think they felt pity for me and gave me a chance to apply as a contributor, which is synonymous with freelancer. For the first six months out of college I was writing hundreds of headlines. They all fell flat. None of them got in. As a contributor you’re pitching into a void with very little feedback. I finally got two headlines in and that was enough to have me stick around after the trial period. Then the editorial manager gave me the chance to do the fellowship, which was incredible. I haven’t done cocaine, but I imagine it’s a very similar feeling.

What was it like when you arrived at The Onion’s headquarters in Chicago?
Those first months were the happiest of my life. I came in terrified, but it was just so immediately accepting and supportive of my ideas. It felt like where I was supposed to be.

Do you work closely with the rest of the staff?
It’s a mixture of collaborative and individual work. You start the week by pitching a giant list of evergreen headlines, which aren’t related to current news events, in a first-round meeting. We whittle those down from, say, 600 to 100 headlines, which then go on to a second meeting. We also have timely meetings two or three times a week, where we’ll go through this process in a more sped-up fashion to choose headlines that can respond to the day’s news.

Can you describe the experience of working in the writers’ room at The Onion?
There’s often a lot of jokes being pitched into a void of zero laughter. You might read 10 or 20 jokes out loud that you’ve worked on non-stop for a week, and then you come in to realize none of them are getting in and you’re going to be shut out this week. It’s painful. The room doesn’t pull punches at all. With that said, it’s always really fair, and I think that once you realize it’s just in the interest of making everything you do better, it feels like how group writing should be done.

What are some of your favorite headlines and articles?
A lot of my favorites fit into the box of bizarre, absurdist or just idiotic headlines that make you wonder, why did you spend so much time and effort on creating this? One example is, “Hobby Lobby Lobbies to Strengthen Hobbies” with the sub-head “ ‘We’ll lobby for hobbies all the way to Abu Dhabi,’ says lobby rep Robbie Stobby.” It was all in rhyme and made no point. There were people on the staff who were frustrated we even did it. It was also an idea I had at 4 a.m. The editorial part of my brain should have said, “No, never pitch that. It’s terrible.” But there are certain people it’s going to click with.

Are there any comics or TV shows that have inspired your writing?
The Simpsons. Nothing has ever matched that show in terms of the number of jokes compressed into an episode and how intelligent those writers were. Stella was a big influence—everything David Wain does makes me very happy. Also Louie, Broad City, and there are some British comedians I like a lot: Peep Show and A Bit of Fry and Laurie—it’s like Monty Python with this capitalistic kind of anarchy in it.

I generally stay away from comedy shows or watching comedy, just because I spend so much of my week thinking about it in a more critical mode. After four years of doing this it can sometimes just become rote. You have to remind yourself that it’s not just a mathematic equation of replacing words—there’s an art and a joy to it. It’s a good thing to get to do for a living.

Do you feel that your job as a comedy writer has become more difficult following the election of President Trump?
The night of the election was incredibly deflating for everybody on staff, both because it was a reality check on where the United States was in its prevailing opinions and because we had to project forward the idea of writing four, or eight, years of satire about someone who is a living hyperbole. One reason that Trump is so hard to make jokes about is because his governing philosophy seems to be, I’m going to say exactly what you’re not supposed to say, and there isn’t going to be any element of civility or politeness about it. Those are the tensions that satirists tend to play off of—you can’t make a larger joke about somebody who is performing the function of a joke in speech and behavior.

What role do you see for yourself and The Onion now that the country has entered a “post-truth” era of fake news and alternative facts?
In terms of the function of satire, there’s the dictum of “comforting the afflicted, afflicting the comfortable.” One thing that we can do is provide people who feel frustrated or threatened by the new administration a place where they can be comforted by the fact that there are like-minded people out there. Despite the punditries and discussion of post-facts and fake news on both sides of the spectrum, there is a tangible truth that can get lost in the bluster. One thing The Onion tends to do very well is deliver blunt insights about where we’re at, in ways that have the force of truth and that give a grounding sense of reality.