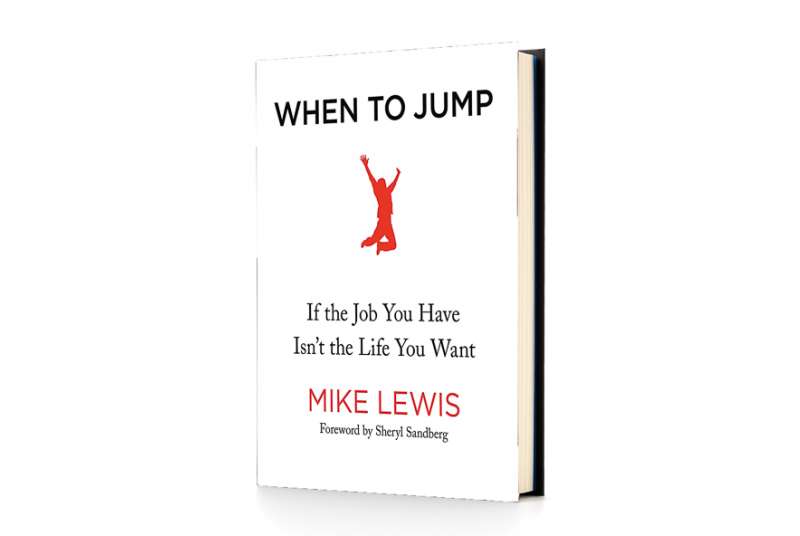 Mike Lewis ’11
When to Jump: If the Job You Have Isn’t the Life You Want
(Henry Holt & Co.)
Only a year out of college, Lewis had a plum corporate job with Bain Capital, but he couldn’t shake his dream to become a professional squash player. So the venture capital analyst did what came naturally: research. He contacted people who made big career changes and asked how they made the leap. “In the darkness of my office, long after office hours ended, I tracked down other people—ex-electricians, consultants, teachers—each of whom had left a place of comfort to chase a passion,” he says. “It became clear that there is a smart way to try for a dream, a certain discipline around responsible planning.” For a year and a half Lewis gathered insights from others and drew up what he terms the “jump curve,” a series of steps that eventually propelled him to leave Bain and travel the world as a pro squash player.

In When to Jump, Lewis shares his journey as well as the anecdotes he has collected from 44 others, including seven Dartmouth alums who made big career changes. He maps the trajectory of a good jump: Be thoughtful and listen to the little voice in your head, plan well, put yourself in a smart position, and don’t look back. “I haven’t yet found a person who has regretted making the jump—whether professionally or personally—if they followed these steps,” he tells DAM. Lewis is also using these lessons as a springboard for his next big thing: a social media platform designed to support a jump (whentojump.com). In October he launched a weekly podcast series that features interviews with executives, academics and public figures—including Facebook chief operating officer Sheryl Sandberg and Huffington Post founder Arianna Huffington—on making a change. It’s a roadmap he says almost everyone, regardless of bank account or stage of life, can follow. “Applying for an internal promotion at work, going back to school at night, teaching cooking classes on the weekends—big jump or small jump, very many of us have something that we’ve longed to try doing,” he says. “If you can’t do it now, write it down. And if you can do it now? Go.”  —Theresa D’Orsi

Read about Lewis’ year-and-a-half journey on the pro squash circuit in our November/December 2015 issue.

Robert Reich ’68
Economics In Wonderland: A Cartoon Guide to a Political World Gone Mad and Mean
(Fantagraphics)
The former U.S. labor secretary and current University of California at Berkeley public policy professor offers a collection of lectures—with cartoons to illustrate his major points—to explain the consequences of the disastrous policies of global austerity with humor and insight. Read an excerpt on our website.

Laura Ingraham ’85
Billionaire at the Barricades
(St. Martin’s Press)
Ingraham traces the DNA of the populist movement, from Barry Goldwater’s 1964 campaign through the Tea Party rallies of the Obama presidency, to explain the movement that swept Donald Trump into the White House. With a forecast for the future of the Make America Great Again agenda, the conservative commentator offers prescriptions for bringing what she calls “real change” to D.C.

Jennifer (Collins) Cross ’94
Writing Ourselves Whole
(Mango)
Cross draws on her work leading writing groups for sexual trauma survivors to provide a collection of essays and exercises to encourage creative writing. She shares recollections of her own process of long-term trauma survival and explains how keeping a journal can lead to recovery.

Sarah Ives ’03
Steeped in Heritage
(Duke University Press)
Anthropologist Ives explores how different ethnic groups make cultural claims on South African rooibos tea, which is harvested from plants grown in a region defined by poverty, dispossession and racism. She “brilliantly brings together the political ecology of a commodity with an astute analysis of the intersection of land-based politics,” according to one reviewer.

Queenie Sukhadia ’16
A City of Sungazers
(Bombaykala)
The Mumbai, India, native won the College’s highest creative writing prize when she wrote this collection of linked short stories while at Dartmouth. The book follows the broken lives of two families and offers a glimpse of the city of Mumbai through six unique perspectives.

Additional books that were not listed in our print edition

Poet Jim Meeker ’58 celebrates the beauty of the landscapes and seascapes of Hawaii with his latest collection, Songs of the Tradewinds: Recollections of Hawai’i (La Paz Press).

Former Yale law professor Owen Fiss ’59 explores the purpose and possibilities of life in the law through moving accounts of 13 lawyers—including Thurgood Marshall, Burke Marshall and Harry Kalven—who shaped the legal world during the past half century in Pillars of Justice: Lawyers and the Liberal Tradition (Harvard University Press).

Gerald Cohen ’62, a German and Russian professor at Missouri University of Science and Technology, offers an etymological study of the origins of one of the great mysteries of the English language in Origin of Kibosh (Routledge).

Murel “Jay” Humphry ’63 travels around the globe to explore six romantic encounters, each fueled by hope and clouded by uncertainty, in The Day You Love Me (Keranen Press).

Middlesex Community College art and world history teacher Shelley Drake Hawks ’83 surveys the lives of seven painters during China’s Cultural Revolution (1966-1976)—a time when they were considered counterrevolutionary and were forbidden to paint—in The Art of Resistance: Painting by Candlelight in Mao’s China (University of Washington Press).

Journalist and diver Joan Martelli ’83 recounts the history of the luxury passenger steamship Rhone, which sank in the British Virgin Islands during a hurricane in 1867 and is now one of the Caribbean’s most popular dive sites, in The Law of Storms (NonFicta).

Jay Lemery, DMS’00, M.D., an associate professor of emergency medicine at the University of Colorado School of Medicine, clarifies the science, dispels the myths and explains the threats of climate change to human health as coauthor of Enviromedics: The Impact of Climate Change on Human Health (Rowman & Littlefield).

Tara Dairman ’01 follows the efforts of Jean Huddy as she tries to save the tiny town of St. Polonius from a recurrence of the time when the elders fell asleep for months, in her children’s book, The Great Hibernation (Random House).