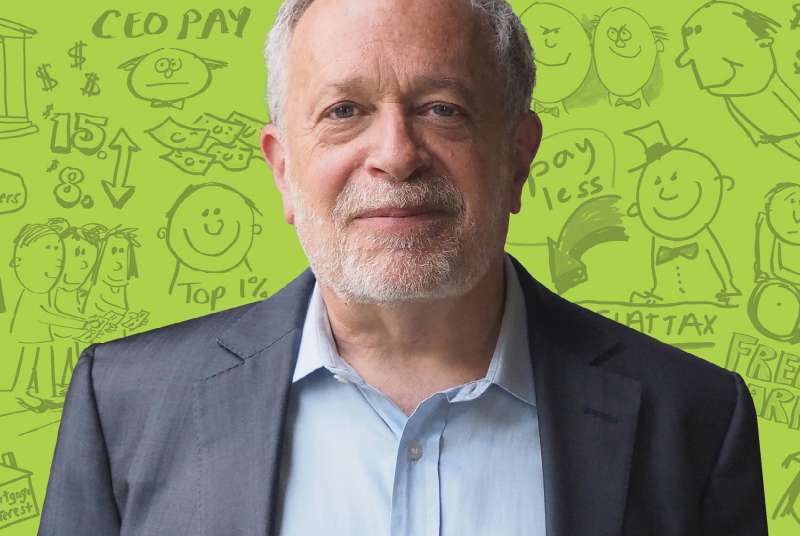 The Art of Economics 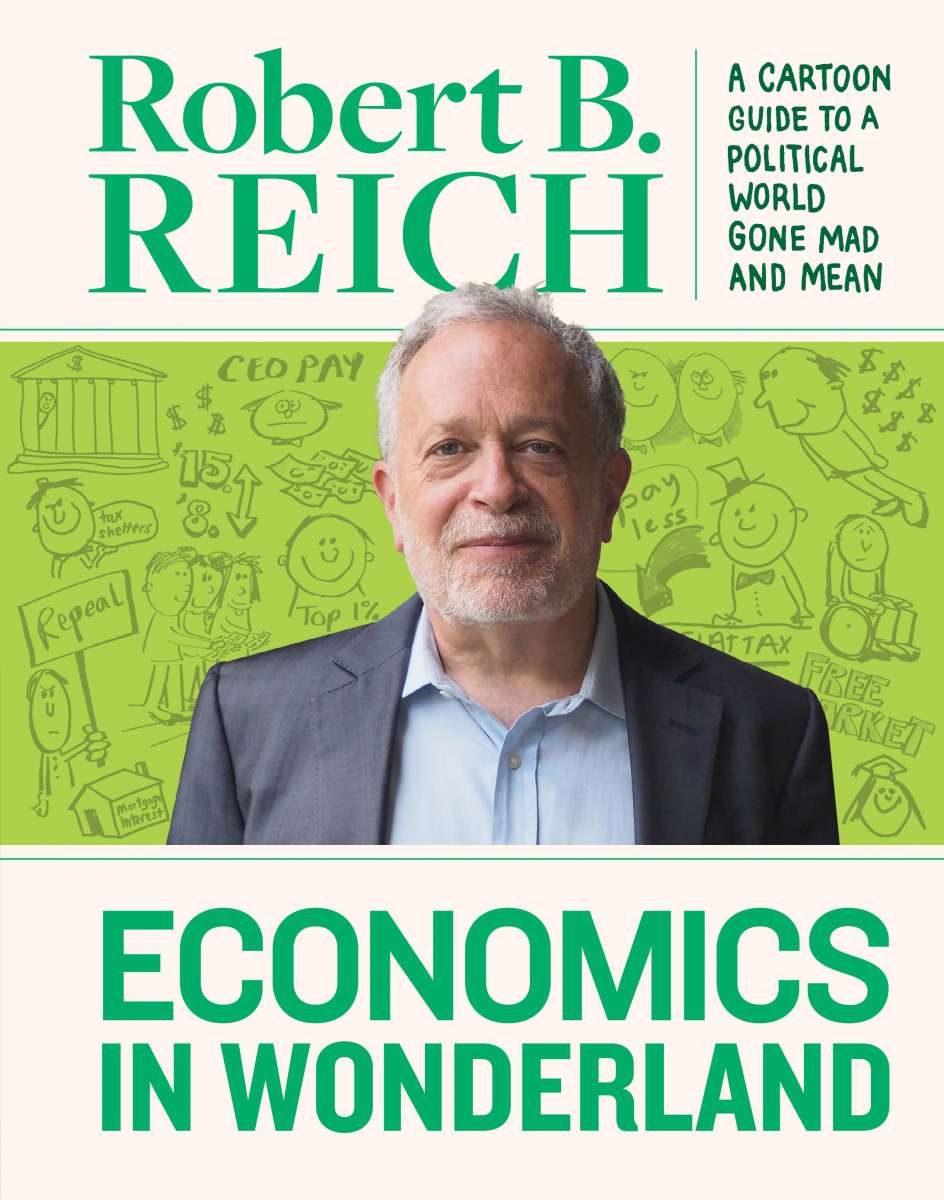 Do you know someone loaded down with student debt? Or do you have a big student loan? Student debt now totals $1.3 trillion, and it’s growing as college costs rise faster than inflation. Faster than the incomes of most students and their families, largely because states are cutting funding to public colleges and universities where most students get their higher education.

Here are four necessary steps for dealing with the college debt crisis.

1) ALLOW GRADUATES TO REFINANCE their student loans at the same low interest rates now available to businesses and some homeowners.

2) ALLOW GRADUATES ESPECIALLY BURDENED BY STUDENT LOANS TO REORGANIZE those loans under the protection of bankruptcy. If Donald Trump can use bankruptcy to shield his fortune every time one of his businesses goes under, onerous student loans should be subject to bankruptcy too.

3) TIE FEDERAL STUDENT LOAN PAYMENTS TO HOW MUCH A GRADUATE EARNS and spread those payments out over 20 years instead of 10. That way a graduate who becomes, say, a social worker pays a far smaller amount than one who becomes an investment banker. And the payments are affordable.

4) LET’S START MOVING BACK TO THE SYSTEM WE ALMOST ACHIEVED IN THE 1950S AND 1960S—free tuition at public colleges and universities. We didn’t used to think of higher education as just a private investment made by students and their families. The GI Bill, which made public college free to returning veterans, returned $7 for every $1 invested. We understood it the same way we understand K through 12: as a public good that made the nation stronger.

We shouldn’t have a college debt crisis, and by taking these four steps to solve it, we all benefit. 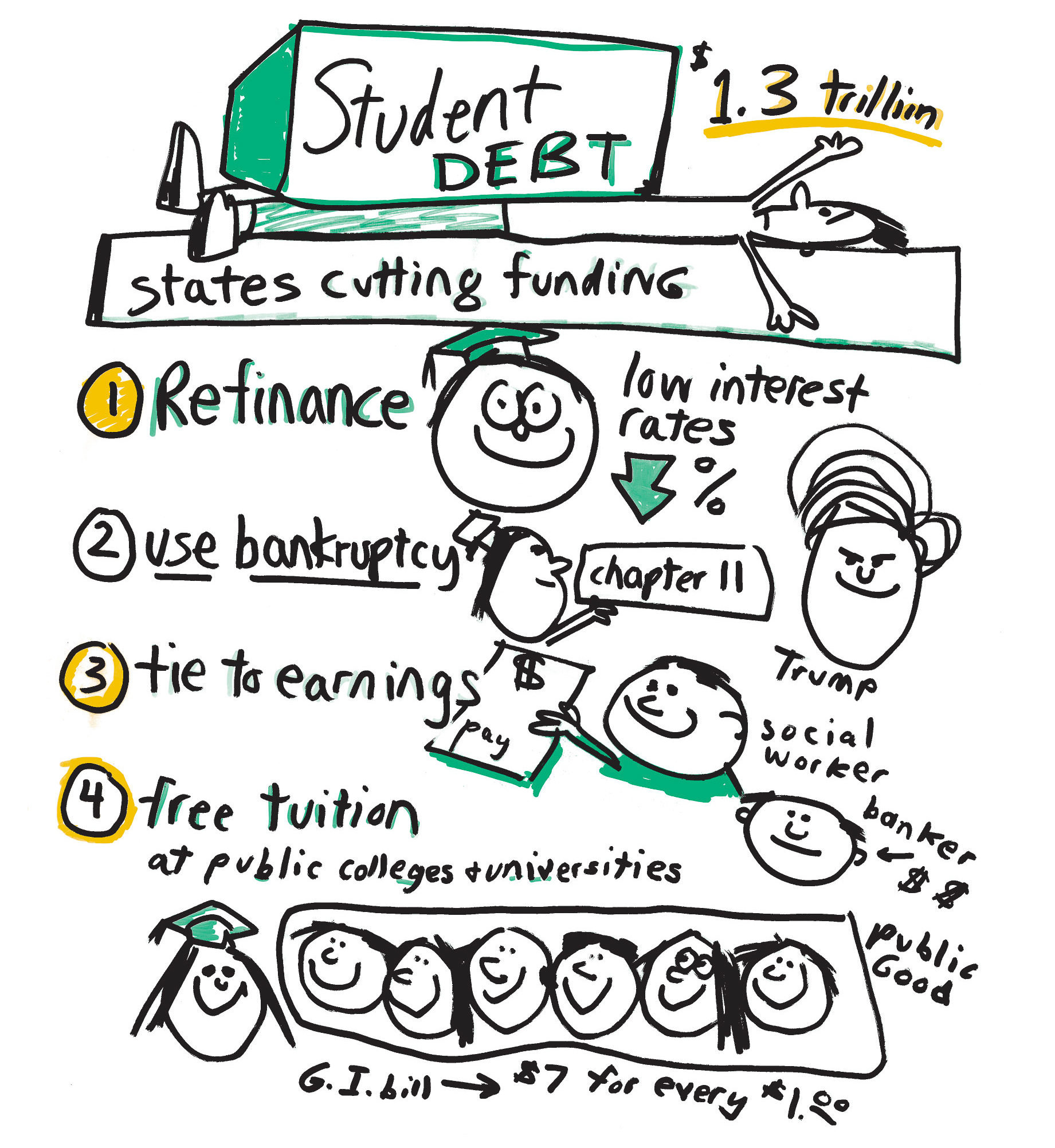 WHAT IS THE RACIAL WEALTH GAP?

Why is the racial wealth gap widening? And what should be done to reverse it?

You don’t hear much about the racial wealth gap, but you should. Wealth inequality is an even bigger problem than income inequality. That’s because you have to have enough savings from income to begin accumulating wealth—buying a house, investing in stocks and bonds, saving to send a kid to college—but many Americans have almost no savings, so they have barely any wealth. The richest 1% of Americans own 40% of the nation’s wealth. The bottom 80% own just 7%.

Low-income families of color are especially disadvantaged because they’re less likely to have savings or inherit wealth. And they face significant barriers to building wealth, such as discriminatory policies that thwart home ownership.

These structural disadvantages have built up to the point where the median net worth of white families is now more than 10 times greater than that of African American and Latino families. 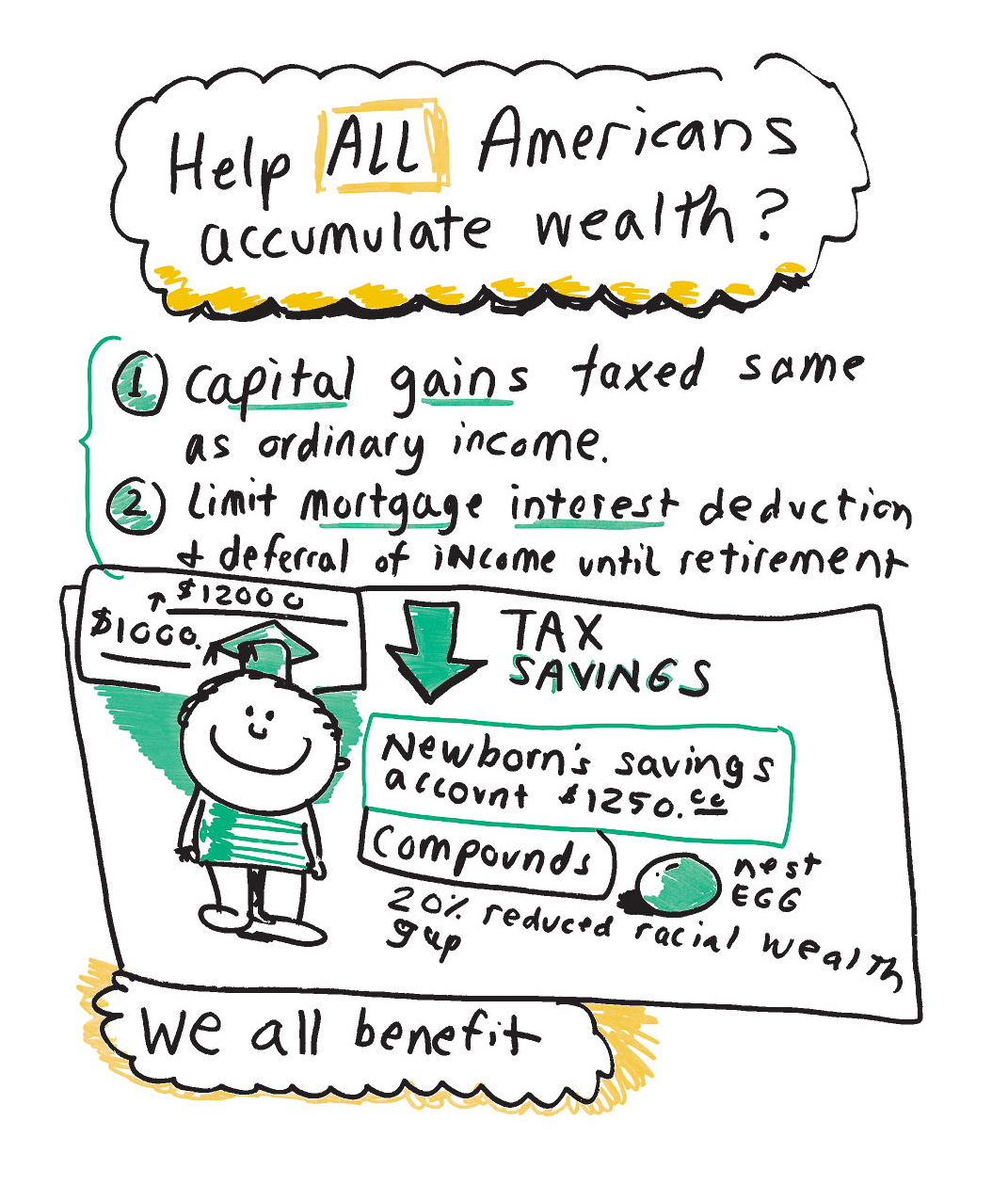 So, what can we do to help all Americans accumulate wealth?

1) REFORM THE TAX SYSTEM so that capital gains—that is, increases in the value of assets—are taxed at the same rate as ordinary income.

2) LIMIT HOW MUCH MORTGAGE INTEREST THE WEALTHY CAN DEDUCT from their incomes and how much retirement savings they can defer. Then use the tax savings from these changes to help lower-income people gain a foothold in building their own wealth.

For example, provide every newborn child with a savings account of at least $1,250—more if a child is from a low-income family. This sum will compound over the years into a solid nest egg. Research shows that this policy alone could reduce the racial wealth gap by nearly 20%.

At age 18, that young person could use the money for tuition or training, a business, or a home. Studies show such accounts can change children’s behavior and increase the likelihood they’ll attend college.

3) ALLOW FAMILIES RECEIVING PUBLIC BENEFITS TO SAVE. Today, a family receiving public assistance can be cut off for having saved just $1,000.

Raise the limits to what a family can save to at least $12,000—roughly three months’ income for a low-income family of four—and thereby put that family on the road to self-sufficiency.

These simple steps will allow families to invest in their own futures, which is the surest way out of poverty.

All of us benefit when everyone has the opportunity to accumulate wealth. 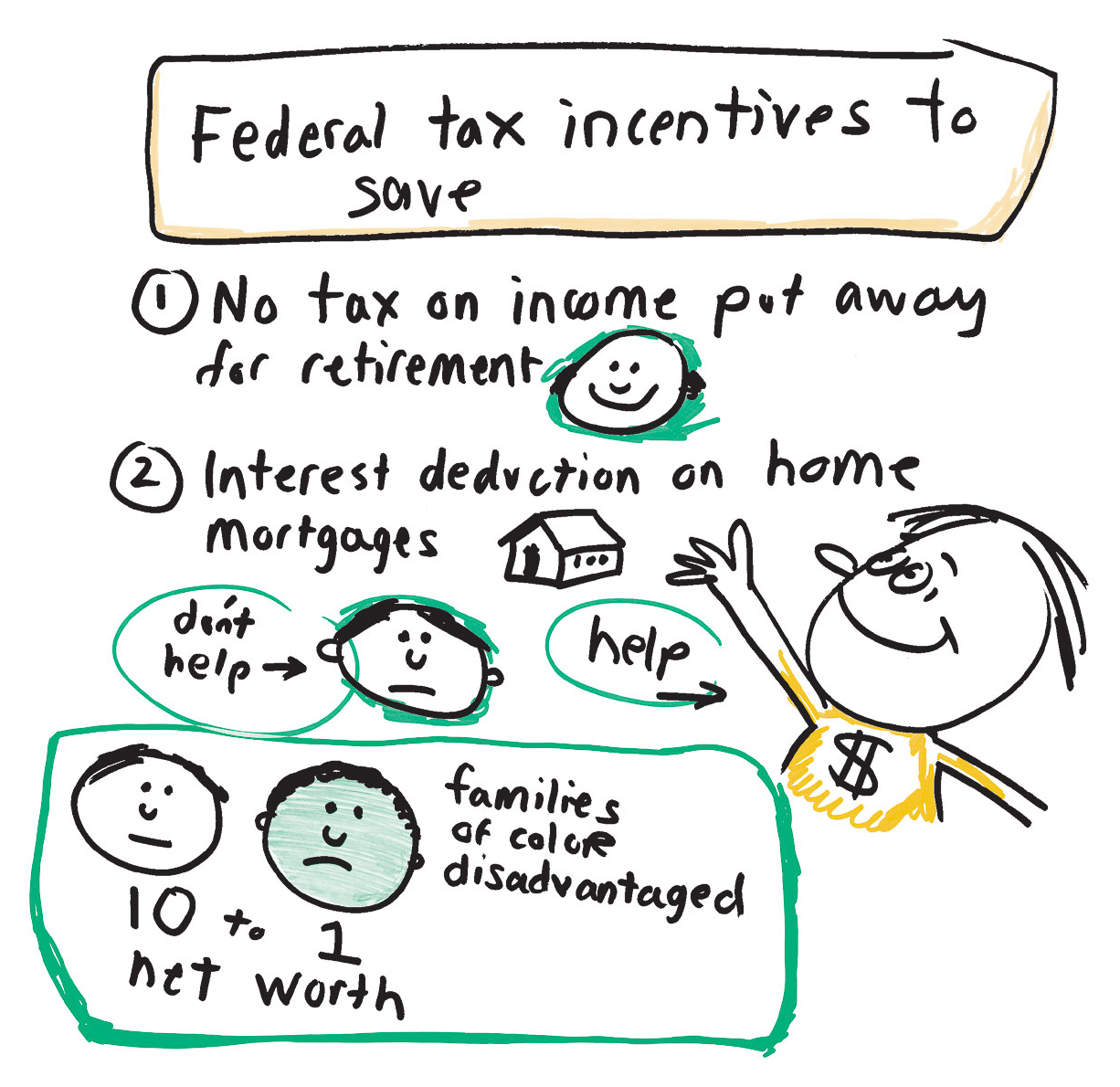 ROBERT REICH: It’s been a while since millions of women marching in cities across the U.S. focused our attention on gender inequality. One issue that caught my attention is the fact that women are more likely to be the sole, primary, or co-breadwinner in their families than ever before, yet they still earn far less than men.

ELENA CHAVEZ QUEZADA: Income inequality is a key issue affecting the economic security of women and their families. But even if we closed the pay gap, a yawning wealth gap would remain. We all know women earn 79 cents for every dollar earned by men, but most people don’t realize that women own only 32 cents on the dollar; and black and Latina women own just pennies on the dollar compared to white men and white women. So—if we’re going to build women’s economic security, we have to tackle income and wealth inequality.

BOB: How is wealth different from income? And why is the wealth gap between women and men so large?

ELENA: Wealth is a much more accurate description of how you’re doing financially. It’s a balance of assets minus debts.

Several factors contribute to the women’s wealth gap. To name a few:

Women make less than men so we’re less able to save. We’re more likely to work part-time, usually because we’re caring for family members, which limits our access to employer benefits that help turn income into wealth.

We often can’t access tax subsidies that encourage savings and investment, for retirement or home ownership, because of the way they’re structured.

And all of these challenges are more intense for women of color who are impacted by racial and gender disparities. 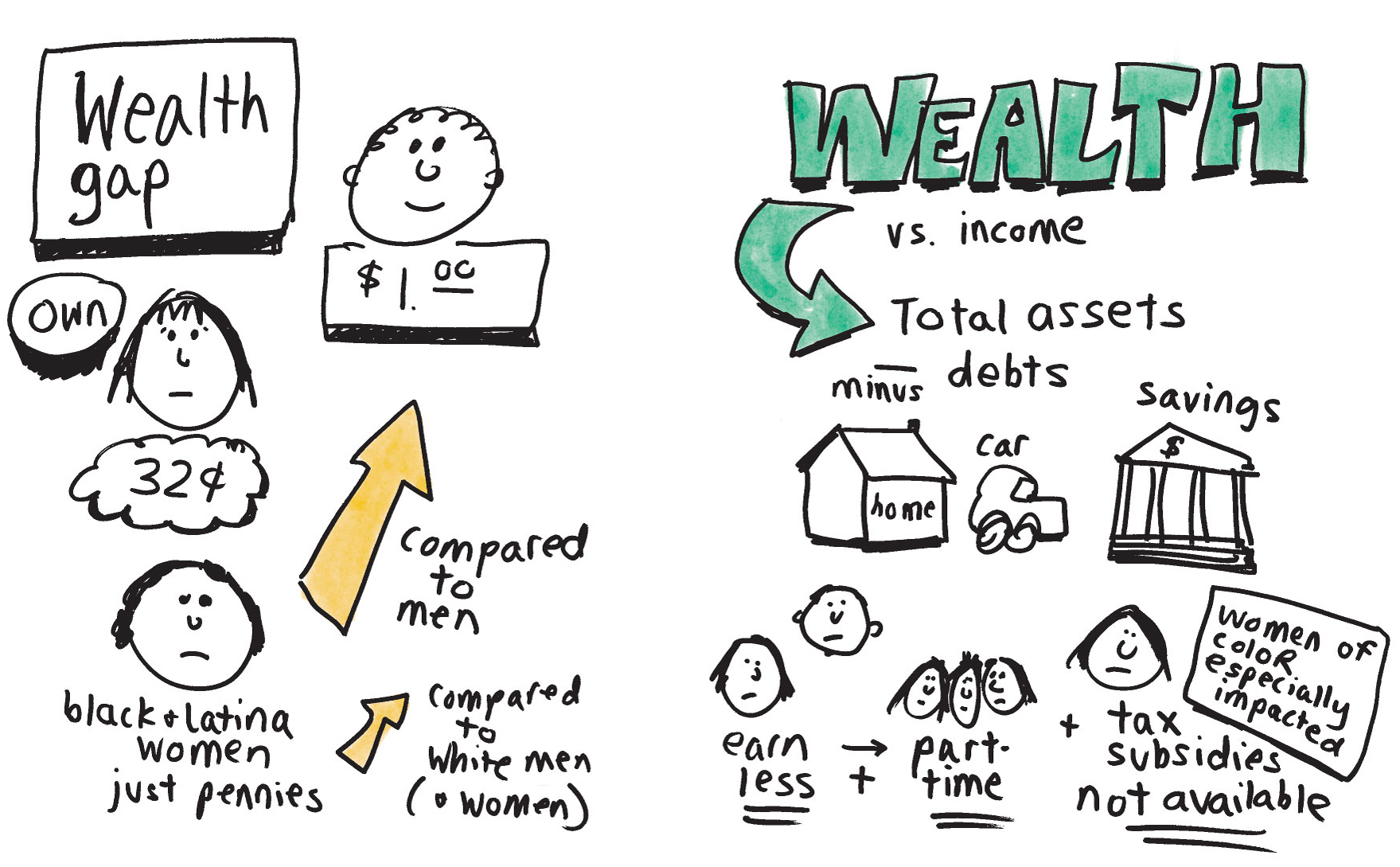 BOB: So what can we do about it?

ELENA: We need a broad menu of solutions that addresses income and wealth inequality.

On the income side, we need to keep pushing for pay equity, affordable childcare, and paid family leave.

On the wealth side, we could start by tackling two key challenges—retirement savings and tax benefits.

FIRST, WE NEED TO SUPPORT NEW STRATEGIES TO EXPAND WOMEN’S ACCESS TO RETIREMENT ACCOUNTS—like state programs such as Secure Choice in California, for example—that enable smaller employers to offer their workers access to accounts; and “portable benefits”—tied to individuals, not employers—so independent contractors, domestic workers, and Lyft drivers can access them. 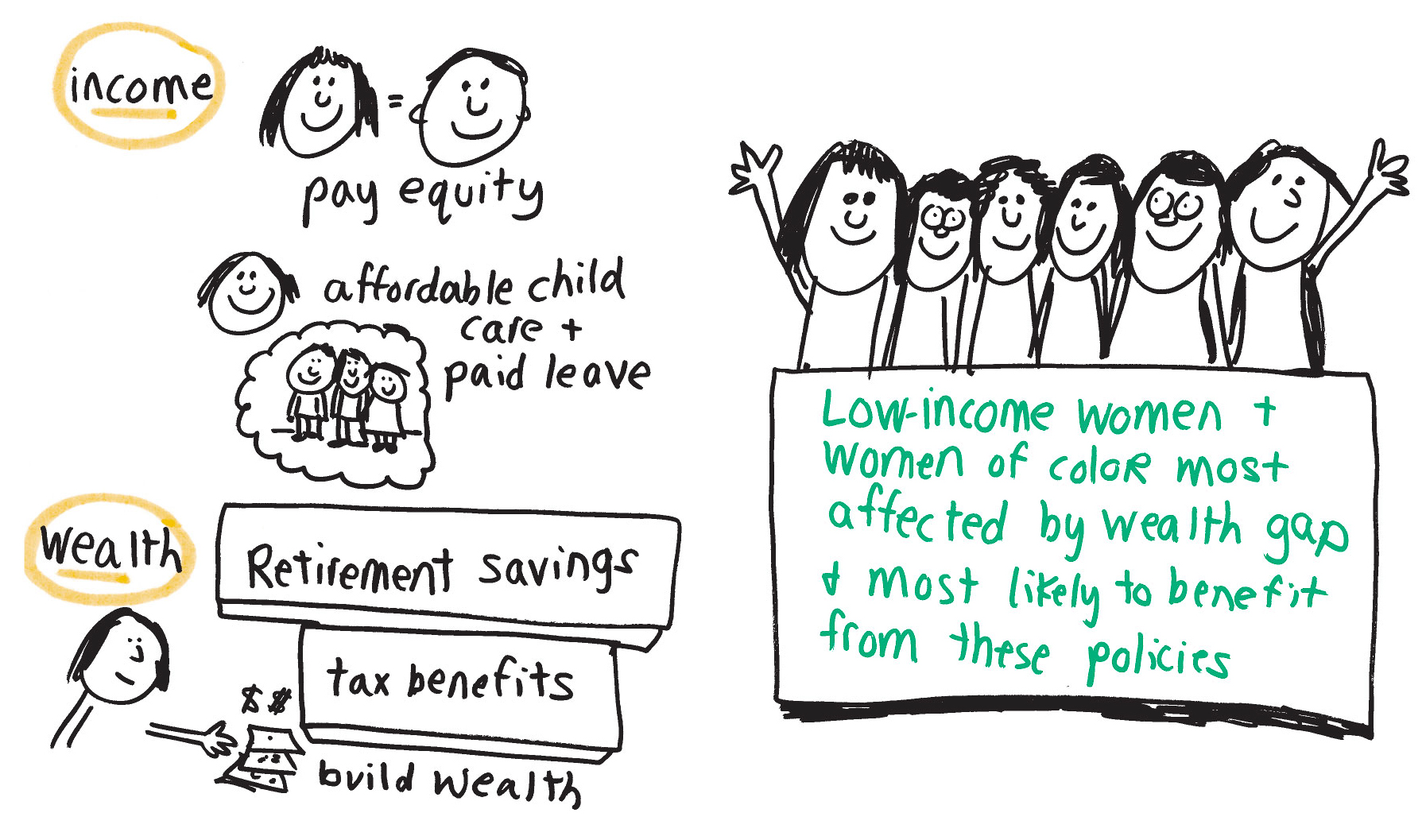 SECOND, WE NEED TO KEEP ASKING “WHO BENEFITS?” as policymakers debate tax reform. If working women and their families don’t benefit, we need to push back. For example:

Two-thirds of households—and most of those led by working women—don’t itemize on their taxes, so they don’t benefit from deductions, like the home mortgage tax credit.

Working families and households led by women are much more likely to benefit from tax credits, especially if they’re refundable. Expanding the Earned Income Tax Credit and the Child Tax Credit should be key priorities for women.

These strategies support everyone; but they would really benefit low-income women and women of color, who are most affected by the women’s wealth gap.

BOB: So closing the women’s wealth gap is good for families, communities, and the national economy. It gives families the cushion they need to weather a financial crisis. It helps them save and invest in their communities.

And all of these strategies contribute to a strong economy. 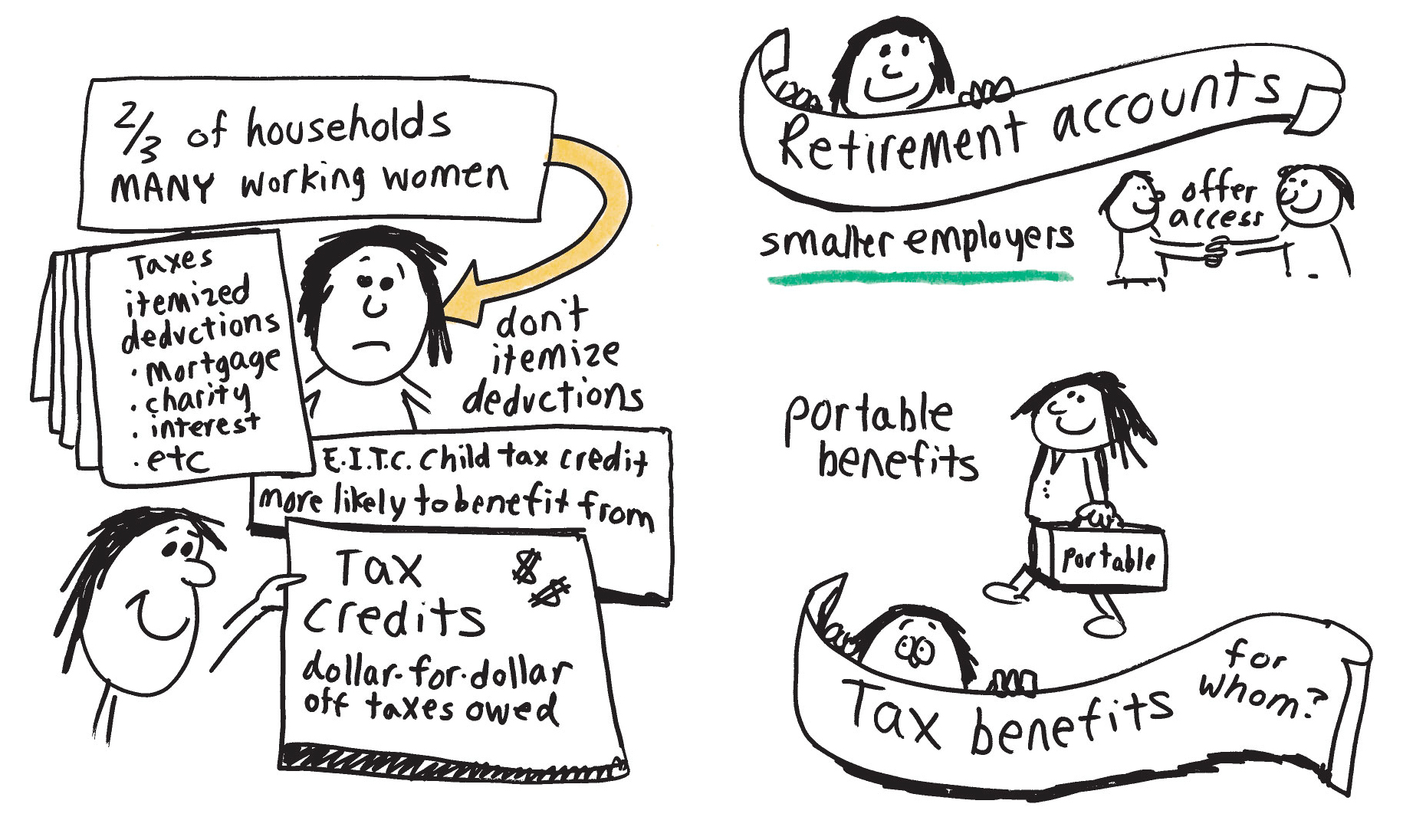 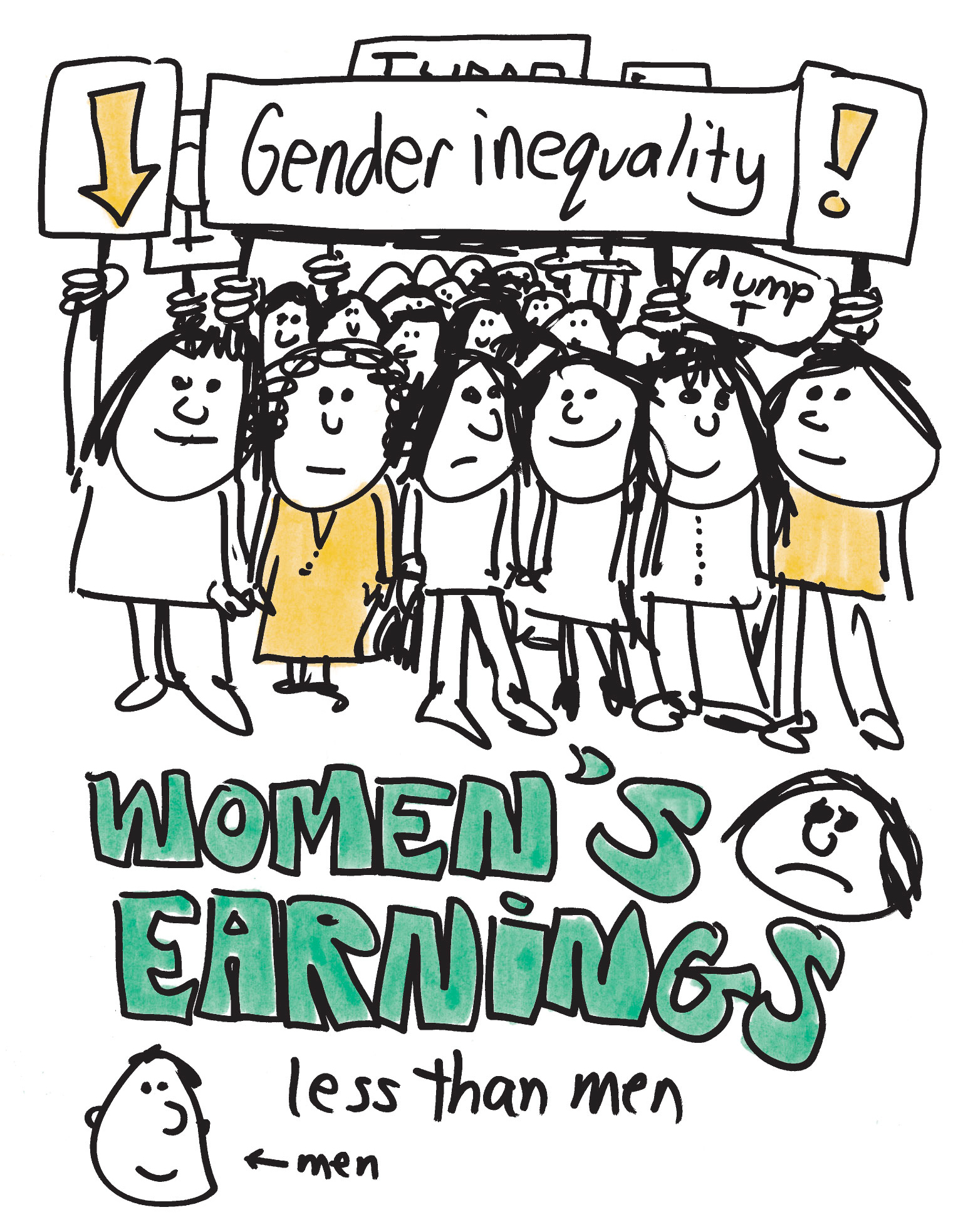 Excerpted from Economics in Wonderland: A Cartoon Guide to a Political World Gone Mad and Mean by Robert Reich. Reprinted by permission of Fantagraphics.