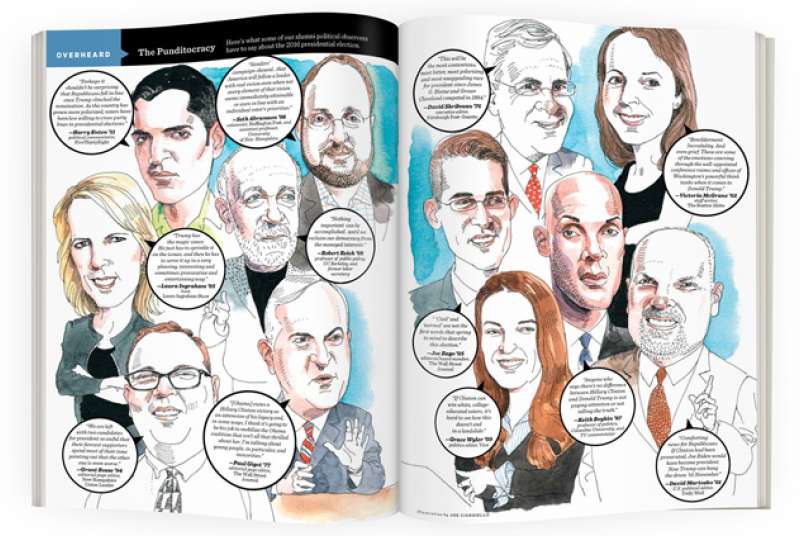 “Perhaps it shouldn’t be surprising that Republicans fell in line once Trump clinched the nomination. As the country has grown more polarized, voters have been less willing to cross party lines in presidential elections.”
—Harry Enten ’11
political commentator, FiveThirtyEight

“Sanders’ campaign showed…that America will follow a leader with real vision even when not every element of that vision seems immediately attainable or even in line with an individual voter’s priorities.”
—Seth Abramson ’98
columnist, Huffington Post, and assistant professor, University of New Hampshire

“Trump has the magic sauce. He just has to sprinkle it on the issues, and then he has to serve it up in a very pleasing, interesting and sometimes provocative and entertaining way.”
—Laura Ingraham ’85
host, Laura Ingraham Show

“Nothing important  can be accomplished…until we reclaim our democracy from the moneyed interests.”
—Robert Reich ’68
professor of  public policy, UC Berkeley, and former labor secretary

“We are left with two candidates for president so awful that their fiercest supporters spend most of their time pointing out that the other one is even worse.”
—Grant Bosse ’94
editorial page editor, New Hampshire Union Leader

“[Obama] views a Hillary Clinton victory as an extension of his legacy and, in some ways, I think it’s going to be his job to mobilize the Obama coalition that isn’t all that thrilled about her. I’m talking about young people, in particular, and minorities.”
—Paul Gigot ’77
editorial page editor, The Wall Street Journal

“This will be the most contentious, most bitter, most polarizing and most unappealing race for president since James G. Blaine and Grover Cleveland competed in 1884.”
—David Shribman ’76
executive editor, Pittsburgh Post-Gazette

“Bewilderment. Incredulity. And even grief. These are some of the emotions coursing through the well-appointed conference rooms and offices of Washington’s powerful think tanks when it comes to Donald Trump.”
—Victoria McGrane ’02
staff writer, The Boston Globe

“ ‘Civil’ and ‘normal’ are not the first words that spring to mind to describe this election.”
—Joe Rago ’05
editorial board member, The Wall Street Journal

“If Clinton can win white, college-educated voters, it’s hard to see how this doesn’t end in a landslide.”
—Grace Wyler ’09
politics editor, Vice

“Anyone who says there’s no difference between Hillary Clinton and Donald Trump is not paying attention or not telling the truth.”
—Keith Boykin ’87
professor of politics, Columbia University, and TV commentator

“Comforting news for Republicans: If Clinton had been prosecuted, Joe Biden would have become president. Now Trump can bang the drum ’til November.”
—David Martosko ’91
U.S. political editor, Daily Mail