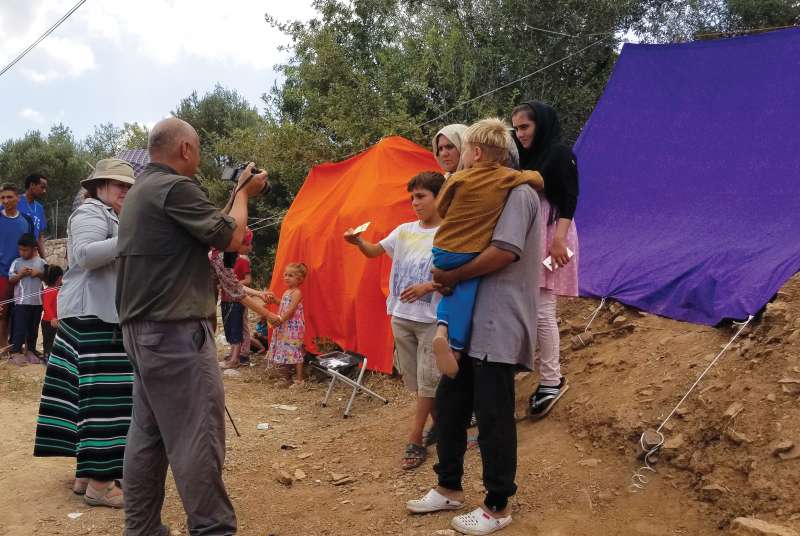 “Go wait over there."

The guard meant business. He pointed to Theresa Menders and her husband, Daniel Farber Huang, and told them to stand with a crowd of about 75 men, women, and children—all refugees.

The husband-and-wife photography team had little choice but to wait in the 90-degree heat. They were outside the gates of the Vial Reception and Identification Center on the Greek island of Chios. Littered with garbage, this desolate internment center has been dubbed “a vision of hell” by one journalist.

It was July 2017, when the couple was on its second visit to the Aegean Sea island to launch its homegrown humanitarian photo project, The Power of Faces. The camp, run by the Greek government, holds 1,200 migrants who have fled violence and persecution in Syria, Iraq, Africa, and Afghanistan. The two had spent more than $10,000 of their own money to make the trek, stuffing a rental car with printers, paper, ink, and other photographic necessities. 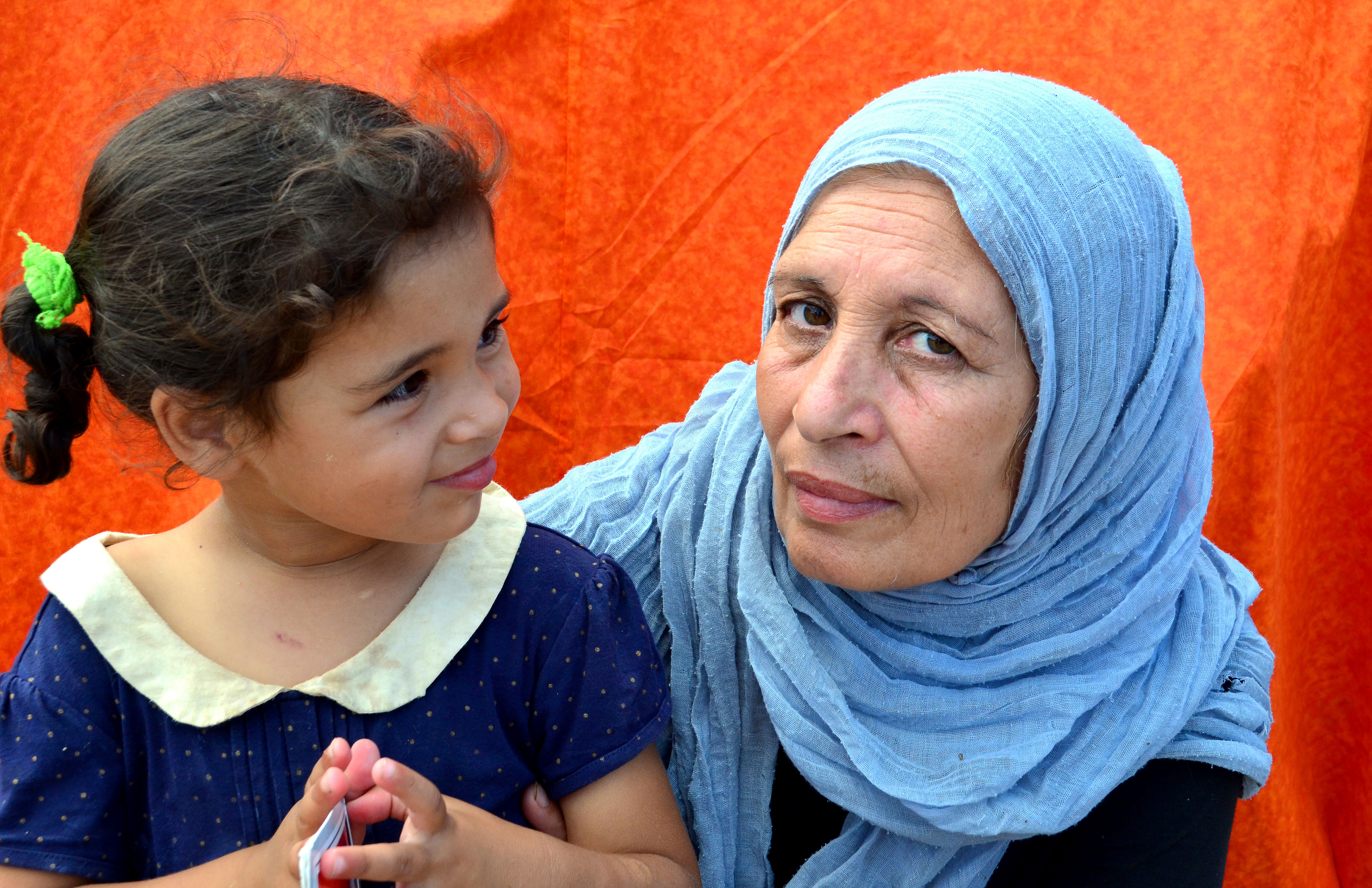 Their vivid portraits have won praise from human rights groups and refugees. Menders’ signature moment comes when she gives her displaced subjects framed color prints of themselves. “It shows they exist,” she says. “When you look at these photos you see the beauty and courage these people have.” But today the pair was stuck. Only a few relief organizations had access to this detention center, which is located in a remote part of the scenic island, far from its quaint villages and tourist sites. “They weren’t letting anybody in,” Menders recalls.

A few months earlier a 29-year-old man had set himself on fire outside the camp’s tall, chainlink fence topped with razor wire. The couple approached the spot to find it hauntingly normal. “It wasn’t like there was a memorial or flowers,” says Huang. “There was no acknowledgment of his death.”

Unnerved, all they could do was wait. And sweat.

After they stood in the sweltering heat for almost an hour, a guard waved them in to see the camp’s manager. Menders and Huang explained their work and showed the manager framed photos they’d taken that past winter of refugees at Souda, another camp on the island.

“He was a little gruff, trying to scare us off,” Menders recalls. The manager refused to let them into his camp but allowed them to set up outside its gates. Under no circumstances were they to take photos of the camp, he warned them, or they’d be arrested.

“They were definitely watching us,” Menders says. 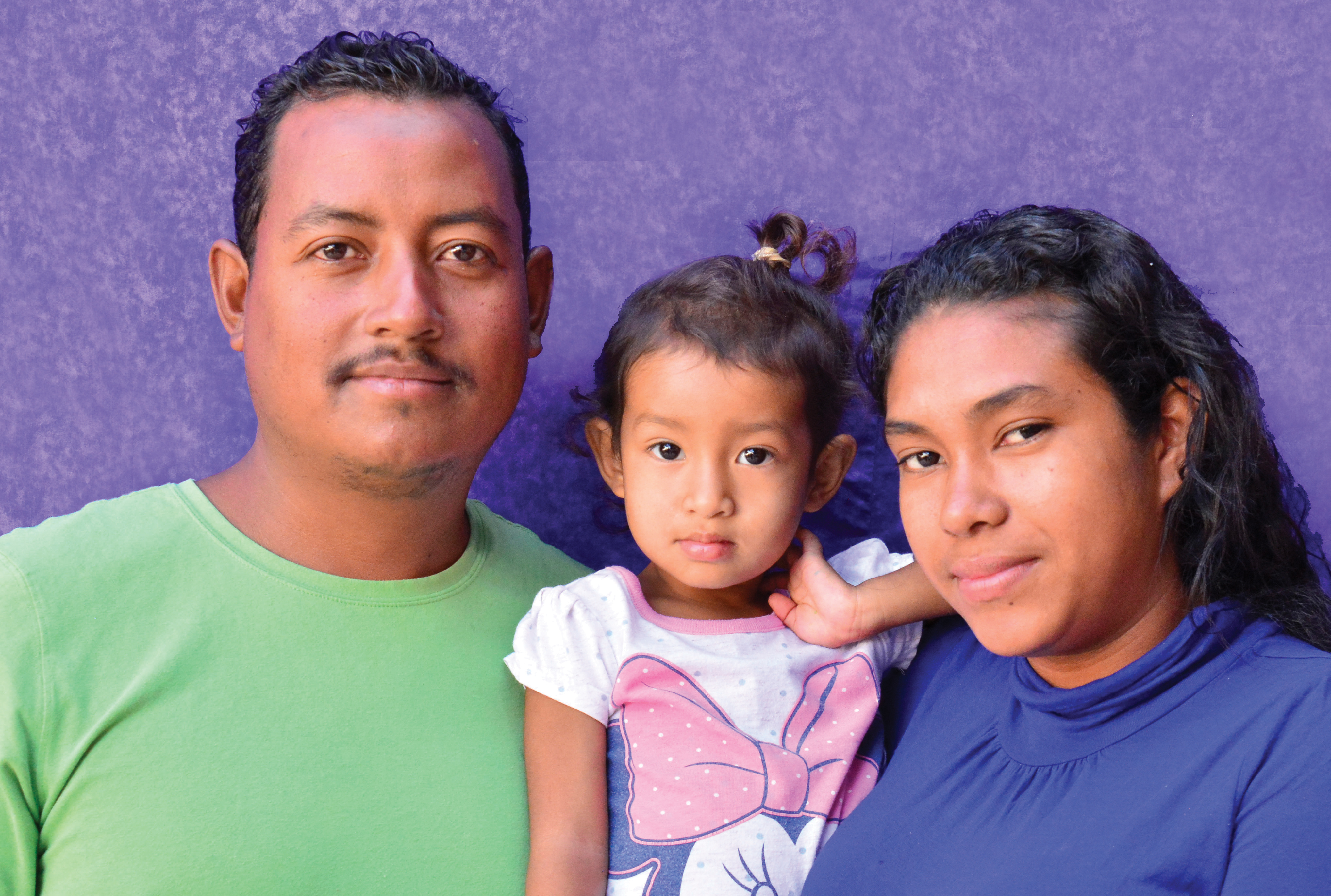 Family means everything to Menders. She was born and raised in Coventry, Rhode Island, the 11th of 12 kids. As part of a big brood that loved hiking and camping, she learned to be flexible, independent, and resourceful. “You have to be, in a family that size,” Menders says.

As a student she volunteered at Dartmouth-Hitchcock’s mental health center and caught the travel bug studying in Morelia, Mexico, and at the University of California, San Diego. Her career trajectory turned toward business strategy and consulting, yet she always made time for others. “I always tried to do things on the side focused on social issues,” says Menders, who is director of information technology at Otsuka America Pharmaceutical.

Her husband of 23 years shares her spirit. Like his wife, Huang holds down a full-time job, as CEO of a strategic consulting company. One of 10 kids, he loved photography since he could hold a camera. His passion sparked Menders to take it up as a hobby.

They were living in New York City on 9/11. Instinctively, Huang picked up his camera and started documenting what was happening. “It was like a safety blanket,” he recalls. “Holding it in my hands made me feel I had a purpose for going out.”

In the weeks after the attacks, prominent institutions took interest in their work, including the New-York Historical Society, the Museum of the City of New York, and the New York City Fire Museum. “We realized from that initial experience we had the ability to document history,” says Huang.

With a growing family, they traded Manhattan for a pastoral setting in Princeton in 2002. Two years later, they began using their capabilities to raise awareness for causes important to them, especially ones fighting for women’s and children’s issues in Haiti, Colombia, India, and Vanuatu.

“When the refugee crisis exploded in Syria in 2015, it was hard for us to keep up,” Menders recalls. “We talked about it incessantly. We couldn’t believe what was going on. We thought, ‘What could we do besides send money? We have to do something more.’ You have a responsibility, if you have a voice, to use it for others and to use it for good.”

They fought a months-long bureaucratic battle to visit Chios before their first trip in January 2017. “The red tape was by far the hardest part,” says Menders, who developed a strong relationship with Toula Kitromilidi, founder of Chios Eastern Shore Response Team, which provides humanitarian aid when boats land there. 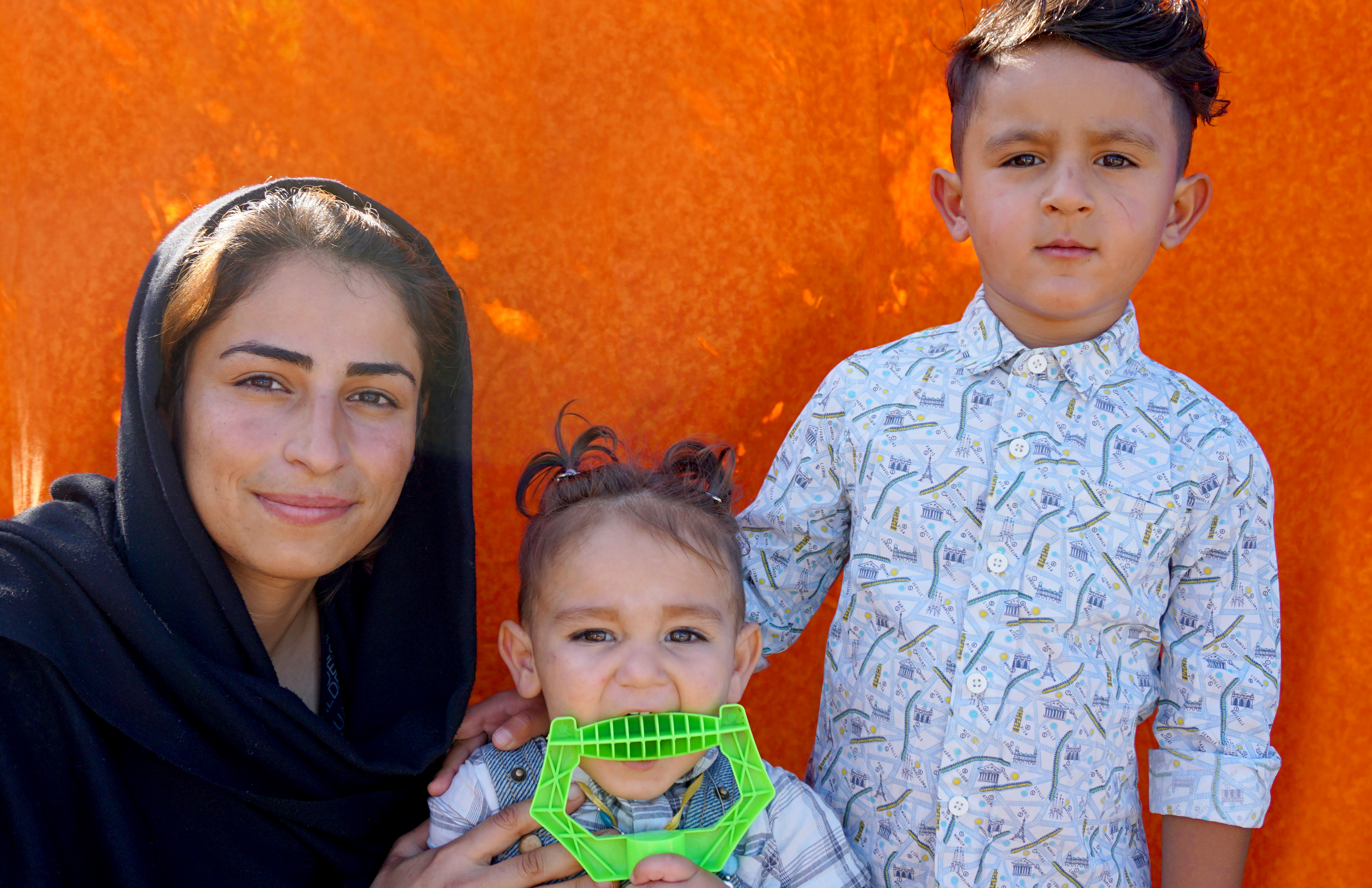 When she and her husband arrived, the island was suffering its coldest winter in 40 years, with lows dipping to freezing. At Souda, wind whipped the thin walls of gray tents a few hundred yards from the coast. Families, single men and women, and unaccompanied children packed the makeshift shelters. They stored their food in crates set off the ground because rats prowled tent floors at night. A lack of plumbing and electricity made ordeals out of cooking, cleaning, and bathing.

Refugees told Menders and Huang they had crossed treacherous seas in inflatable rafts crammed with as many as 60 people—some of whom wore inner tubes as life jackets. They told stories of harrowing escapes, beatings, deaths, and missing relatives. “They’re hoping to gain asylum in the European Union, Canada, the United States—anywhere that would be safe,” says Huang. As Menders and Huang walked around with their cameras, smiling, making eye contact, and offering a friendly hello, migrants kept asking them to take their pictures.

The couple had a revelation. They realized a simple snapshot could have great impact—globally and individually. “It’s validating. It shows these people exist. They’d say, ‘Please, tell other people,’ ” she recalls. “We thought giving people proper portraits of themselves and their families would be something they’d want. They’ve likely lost everything, including family photos.”

When she and her husband returned to Chios six months later they brought the makings of a photo studio—bright-orange backdrops, high-speed portable printers, and other gear. A young guard led them to a dusty spot outside the fence at Vial next to putrid latrines and steps from a busy road where cars sped by. They strung a tarp to control the lighting, and for power they snaked a 100-foot extension cord into the camp.

Because so much of refugee life involves standing in line, Menders and Huang devised a workaround—a 300-ticket numbering system. They posted signs in English and Arabic. Migrants took numbers, and instead of waiting, Menders made announcements when it was time for their sessions. As Huang took portrait after portrait, Menders printed photos from the open hatchback of their nearby rental car.

Soon the operation attracted the police, who demanded to inspect their cameras and see their passports—which they had left at their hotel. “I thought we were going to be arrested,” Menders recalls. “I thought, ‘I’ll just smile and show them I mean no harm.’ ” The police warned them to keep their passports with them at all times and not to photograph the camp.

The couple worked nonstop for two days in blistering heat to capture and print roughly 1,500 portraits. Since then Menders and Huang have spoken about refugees and The Power of Faces at a TEDx talk in Wilmington, Delaware, and at Rutgers University and hosted a photojournalist meet-up at the 2019 SXSW Conference & Festival. Each of their largely self-funded trips costs between $10,000 and $18,000, and they returned to Vial last July. Last December the couple and two of their four children spent three days photographing in the Barretal Refugee Camp, a former dance hall in Tijuana, Mexico, that houses thousands of migrants who traveled in caravans from Central America.

Menders and Huang have displayed their photos and other objects they’ve collected at refugee camps, including inner tubes, at several Amnesty International conferences. Prachi Rao, innovation lab manager at Amnesty USA, recalls a picture from Barretal in which a woman with dyed-red hair kisses a young man wearing a red baseball cap. “It’s really beautiful,” Rao says. “It shows the power of their work.”

Kathy Bartels ’88, a friend since Menders’ middle school days, says she always thought Menders would have a big family. “I didn’t know they would keep making their family bigger and bigger. That’s what they’ve done with this project,” she says.

Menders and Huang were planning to visit camps in Bangladesh this April. Menders had worked for months to get visas, find a driver and translator, get help from an organization on the ground, and navigate bureaucratic hurdles. Little was coming together, and time was running out.

Steve Gleydura is a freelance writer who lives in Cleveland.

You May Also Like
Lost Art
What’s old is new for throwback photographer Lara Porzak ’89.
Photo Finish
Ever since the Munich games of 1972, Sports Illustrated photographer Heinz Kluetmeier ’65, Th’66, has captured the essence of the summer Olympics.