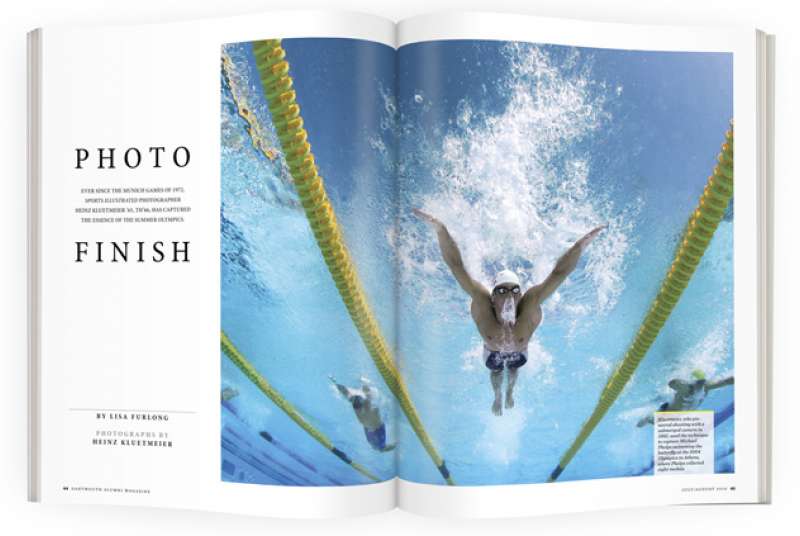 Ever since the Munich games of 1972, Sports Illustrated photographer Heinz Kluetmeier ’65, Th’66, has captured the essence of the summer Olympics.
Lisa Furlong | Jul - Aug 2016

“Digital technology has allowed a lot of mediocre photographers to take good pictures, but the best are still the best,” says Heinz Kluetmeier, who should know. As a Sports Illustrated photographer since 1969, he has more than 150 covers—and 300-plus interior spreads—to his credit. You may not immediately recognize his name, but his images are a different matter. From airborne gymnasts and churning track stars to underwater sequence shots that document Michael Phelps winning the 100-meter butterfly by one-tenth of a second at the 2008 Summer Olympics, Kluetmeier photos are immediately familiar. His 1980 Winter Games “Miracle on Ice” cover photo so perfectly captured the joyous U.S. hockey team’s victory over Russia that no headline was needed.

Kluetmeier came to Dartmouth with some paid photographic experience already under his belt. In high school he was a stringer for The Milwaukee Journal and the Associated Press, which led to shooting  Dartmouth football games for the wire service. He served as photography editor and editor of the Aegis as he worked on an engineering degree to please his father, who did not think taking pictures could constitute a career. Before turning to photography seriously, Kluetmeier spent two years working for Inland Steel and says his engineering studies, although not directly applicable to his craft, have helped him figure out some complicated remote set-up shots. (One of his favorites shows Phelps underwater as a student at the University of Michigan, floating above a dorm-room desk and computer.)

When he’s not traveling on assignment, Kluetmeier divides his time between a home in Fort Lauderdale, Florida, and a loft in the Flatiron District of Manhattan, where he displays none of his photographs. He mentions casually that former Summer Olympian Shaquille O’Neal once came over to hang out and shoot indoor hoops.

Kluetmeier’s Shaq anecdote elides into many others reflective of a stellar career—beginning with the 1972 Olympics, where he stood his ground against famed German photographer and Nazi propagandist Leni Riefenstahl, who tried to elbow him out of the way to shoot an event. Kluetmeier happened to be dining with U.S. swimmer Mark Spitz and other friends when the Palestinian Black September terror group seized 11 Israeli athletes and coaches in the Olympic village. “When we dropped Mark off there, we had no idea what was happening,” he recalls. “Can you imagine what it would have meant for those terrorists to have seized a Jewish American who had won seven gold medals?”

Then there’s the time at the 1984 Los Angeles Games when he almost ran into high jumper Dwight Stones as the photographer sprinted across the track infield to get to the scene of Mary Decker’s fall after she was tripped by Great Britain’s barefoot runner Zola Budd during the 3,000-meter final. At the 1988 Seoul Olympics he was forced by an armed security guard to move away from a spot where he was shooting diver Greg Louganis right before the dive in which Louganis hit his head on the 3-meter board. In another run-in with a security guard, on the track at the 1980 Moscow Olympics, he feigned ignorance of the Russian language—“even after sleeping through Russian class at Dartmouth, I knew what he was saying”—to snap the shot he wanted before the guard returned with a translator.

Although Kluetmeier says he prefers shooting Winter to Summer Olympics because there is more freedom of movement, the former high school swimmer has not only pioneered underwater shots but has mastered shooting butterfly events, which he says are particularly challenging. “You have to time perfectly when the swimmer is emerging from the water and get the shot in focus,” he says. Gymnastic events, he notes, are easier to shoot because routines are scripted, so a photographer knows what is going to happen when. When it comes to track events, he has a fondness for the starting line, which most photographers eschew for the finish line, he says.

His camera of choice? A Nikon D4. And his most daunting assignment? He pauses several minutes before answering, “Caitlyn Jenner,” whom he shot in April for Sports Illustrated. She’s standing on a track, holding photos taken by Kluetmeier at the 1976 Olympics that showed Jenner winning gold in the decathlon. The difficulty, Kluetmeier says, was not in reconnecting with Jenner, whom he describes as “a sweet woman who was a sweet man,” but in communication frustrations rooted in the photographer’s voice disorder, the result of a fall a few years ago when he was shooting circus scenes. The mishap broke seven ribs and led to atrophied vocal chords. “I am supposed to sing and shout loud vowels,” he says of his therapy. “I need to work more on that but am self-conscious about people hearing me.”

As Kluetmeier continues to work on his voice, his unforgettable images speak for him.