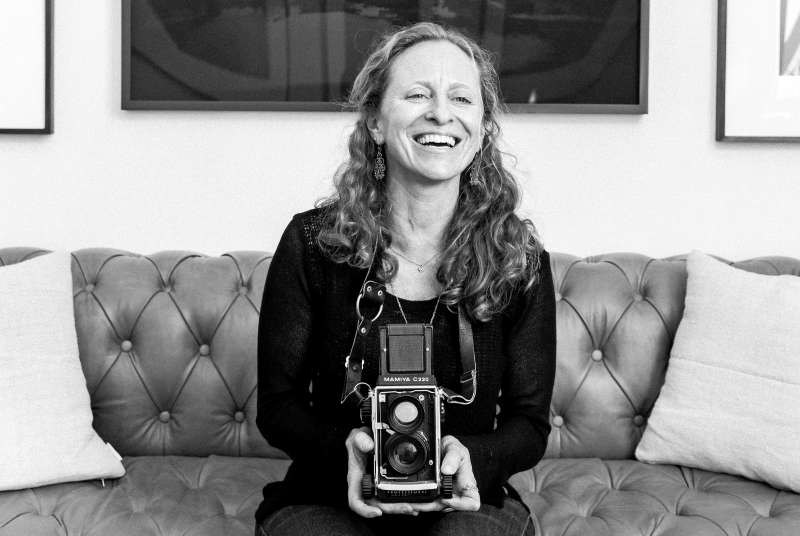 “I suck at digital,” confesses Lara Porzak. “I just don’t get it.”

In a world full of pixels, Porzak is a hardcore analog adherent. Without formal training, she’s mastered her craft through years of obsessively tinkering with vintage equipment, much of which dates back to photography’s 19th-century origins. She has held onto hard-to-find film stocks and printing paper for more than a decade, and she has sources in Los Angeles and Santa Fe, New Mexico, for other specialized supplies. “It’s not called ‘collecting’ when you are a hoarder,” Porzak deadpans.

Ethereal tintype images and film prints lined the white walls of her temporary gallery in Venice, California, last summer. The tintypes are created on metal using a process that’s well over 100 years old. Her portraits and photographs of animals and nature are rendered with painterly imperfection. Whether it’s an oversized butterfly meticulously materialized through manipulating close-up lenses and 1860s photo-processing chemistry or a hazy, forested landscape, there’s a haunting quality and spiritual depth to her work.

“Beauty is beauty. If I see it, I’m going to do it,” she says. “I go to Yosemite and photograph Half Dome. Am I going to do it as well as Ansel Adams? Hell, no. Will I do it differently? Yes.”

After graduating as a theater major, Porzak—daughter of Brian Porzak ’65—moved to Santa Fe, in part because of the awe-inspiring light. There she found movie production work. “I always had a camera, but I didn’t know you could make ends meet with it,” she says. “I’m still not convinced you can.” In the early 1990s she was an assistant director in Romania on a series of slasher movies. Subsequent unglamorous gigs in prop departments and on sets took her to Los Angeles.

In 1994 she was a bridesmaid in the wedding of her friend, actress Elisabeth Shue, whom Porzak met through Shue’s brother, Andrew ’89. “I didn’t know what to give her, so I took some pictures,” Porzak says.

She quit the movie business and eventually shot enough high-profile weddings—including those of Ellen DeGeneres and Portia de Rossi and Annette Bening and Warren Beatty—to pay the bills and plow ahead with her film, tintype, and daguerreotype projects.

If couples want traditionally framed, razor-sharp Technicolor-esque wedding portraits, she’s not the one for the job. Instead, Porzak’s images have a dreamy aesthetic, which she captures on film with inexpensive plastic Diana cameras. She has numerous Dianas, each with “its own voice,” she says. “I decide which voice and which lighting to articulate” what’s in the frame. “It’s like a painter picking which brush and which color to use, and that’s where the magic begins.”

Jessica Ritz is a freelance journalist based in Los Angeles who has written for publications including the Los Angeles Times and The New York Times.

You May Also Like
The Daguerreotypist
Augustus Washington, class of 1847, left a photographic legacy unique in scope and perspective.
Digital Composer
Photographer BreeAnne Clowdus ’97 has an eye for the theatrical.