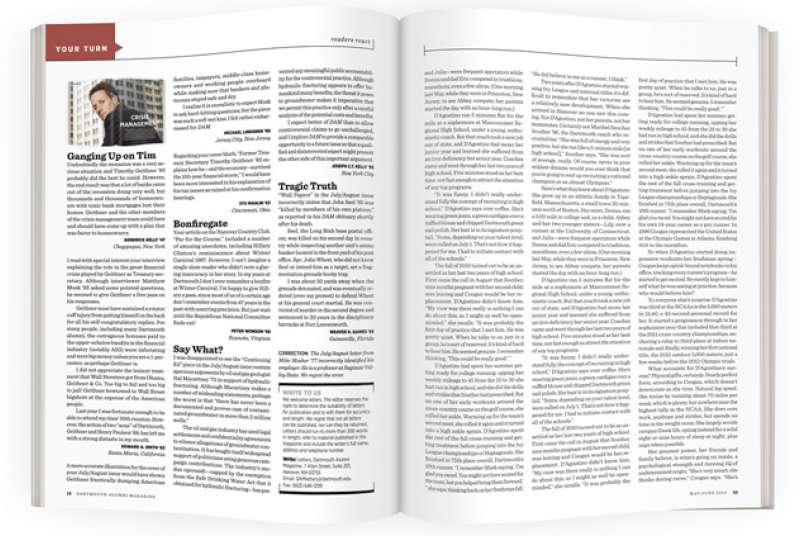 Ganging Up on Tim
Undoubtedly the recession was a very serious situation and Timothy Geithner ’83 probably did the best he could. However, the end result was that a lot of banks came out of the recession doing very well, but thousands and thousands of homeowners with toxic bank mortgages lost their homes. Geithner and the other members of the crisis management team could have and should have come up with a plan that was fairer to homeowners.

I read with special interest your interview explaining the role in the great financial crisis played by Geithner as Treasury secretary. Although interviewer Matthew Mosk ’92 asked some pointed questions, he seemed to give Geithner a free pass on his responses.

Geithner must have sustained a rotator cuff injury from patting himself on the back for all his self-congratulatory replies. For many people, including many Dartmouth alumni, the outrageous bonuses paid to the upper-echelon bandits in the financial industry (notably AIG) were infuriating and were big money unless you are a 1-percenter, as perhaps Geithner is.

I did not appreciate the lenient treatment that Wall Streeters got from Obama, Geithner & Co. Too big to fail and too big to jail! Geithner kowtowed to Wall Street bigshots at the expense of the American people.

Last year I was fortunate enough to be able to attend my class’ 50th reunion. However, the action of two “sons” of Dartmouth, Geithner and Henry Paulson ’68, has left me with a strong distaste in my mouth.

A more accurate illustration for the cover of your July/August issue would have shown Geithner frantically dumping American families, taxpayers, middle-class homeowners and working people overboard while making sure that bankers and plutocrats stayed safe and dry.

I realize it is unrealistic to expect Mosk to ask hard-hitting questions, but the piece was such a soft wet kiss, I felt rather embarrassed for DAM.

Regarding your cover blurb, “Former Treasury Secretary Timothy Geithner ’83 explains how he—and the economy—survived the 100-year financial storm,” I would have been more interested in his explanation of his tax issues as raised at his confirmation hearings.

Bonfiregate
Your article on the Hanover Country Club, “Par for the Course,” included a number of amusing anecdotes, including Hillary Clinton’s reminiscence about Winter Carnival 1967. However, I can’t imagine a single alum reader who didn’t note a glaring inaccuracy in her story. In my years at Dartmouth I don’t ever remember a bonfire at Winter Carnival. I’m happy to give Hillary a pass, since most of us of a certain age don’t remember events from 47 years in the past with unerring precision. But just wait until the Republican National Committee finds out!

Say What?
I was disappointed to see the “Continuing Ed” piece in the July/August issue contain specious arguments by oil and gas geologist Hal Macartney ’75 in support of hydraulic fracturing. Although Macartney makes a number of misleading statements, perhaps the worst is that “there has never been a documented and proven case of contaminated groundwater in more than 2 million wells.”

The oil and gas industry has used legal settlements and confidentiality agreements to silence allegations of groundwater contamination. It has bought itself widespread support of politicians using generous campaign contributions. The industry’s modus operandi—capped by the exemption from the Safe Drinking Water Act that it obtained for hydraulic fracturing—has prevented any meaningful public accountability for the controversial practice. Although hydraulic fracturing appears to offer humankind many benefits, the threat it poses to groundwater makes it imperative that we permit this practice only after a careful analysis of the potential costs and benefits.

I expect better of DAM than to allow controversial claims to go unchallenged, and I implore DAM to provide a comparable opportunity in a future issue so that a qualified and disinterested expert might present the other side of this important argument.

Tragic Truth
“Wall Papers” in the July/August issue incorrectly states that John Seel ’65 was “killed by members of his own platoon,” as reported in his DAM obituary shortly after his death.

Seel, the Long Binh base postal officer, was killed on his second day in country while inspecting another unit’s ammo bunker located in the front yard of his post office. Spc. John Wheat, who did not know Seel or intend him as a target, set a fragmentation grenade booby trap.

I was about 50 yards away when the grenade detonated, and was eventually ordered (over my protest) to defend Wheat at his general court martial. He was convicted of murder in the second degree and sentenced to 20 years in the disciplinary barracks at Fort Leavenworth.

Male Call
My husband, Ralph Watkins ’51, on full scholarship, worked two jobs and joined a fraternity. As treasurer he earned his room and board. Reading the letters section of your Mar/April issue about problems with fraternities and campus behavior made me wonder if the College reverted to an all-male school, would that mitigate campus behavior?

Correction: The July/August letter from Mike Mosher ’77 incorrectly identified his employer. He is a professor at Saginaw Valley State. We regret the error.