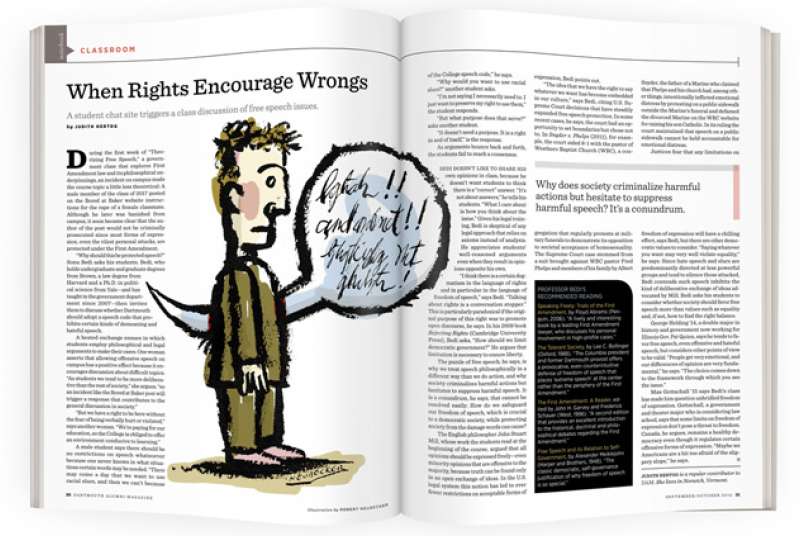 During the first week of “Theorizing Free Speech,” a government class that explores First Amendment law and its philosophical underpinnings, an incident on campus made the course topic a little less theoretical: A male member of the class of 2017 posted on the Bored at Baker website instructions for the rape of a female classmate. Although he later was banished from campus, it soon became clear that the author of the post would not be criminally prosecuted since most forms of expression, even the vilest personal attacks, are protected under the First Amendment.

“Why should this be protected speech?” Sonu Bedi asks his students. Bedi, who holds undergraduate and graduate degrees from Brown, a law degree from Harvard and a Ph.D. in political science from Yale—and has taught in the government department since 2007—then invites them to discuss whether Dartmouth should adopt a speech code that prohibits certain kinds of demeaning and hateful speech.

A heated exchange ensues in which students employ philosophical and legal arguments to make their cases. One woman asserts that allowing offensive speech on campus has a positive effect because it encourages discussion about difficult topics. “As students we tend to be more deliberative than the rest of society,” she argues, “so an incident like the Bored at Baker post will trigger a response that contributes to the general discussion in society.”

“But we have a right to be here without the fear of being verbally hurt or violated,” says another woman. “We’re paying for our education, so the College is obliged to offer an environment conducive to learning.”

A male student says there should be no restrictions on speech whatsoever because one never knows in what situations certain words may be needed. “There may come a day that we want to use racial slurs, and then we can’t because of the College speech code,” he says.

“Why would you want to use racial slurs?” another student asks.

“I’m not saying I necessarily need to. I just want to preserve my right to use them,” the student responds.

“But what purpose does that serve?” asks another student.

“It doesn’t need a purpose. It is a right in and of itself,” is the response.

As arguments bounce back and forth, the students fail to reach a consensus.

Bedi doesn’t like to share his own opinions in class, because he doesn’t want students to think there is a “correct” answer. “It’s not about answers,” he tells his students. “What I care about is how you think about the issue.” Given his legal training, Bedi is skeptical of any legal approach that relies on axioms instead of analysis. He appreciates students’ well-reasoned arguments even when they result in opinions opposite his own.

“I think there is a certain dogmatism in the language of rights and in particular in the language of freedom of speech,” says Bedi. “Talking about rights is a conversation stopper.” This is particularly paradoxical if the original purpose of this right was to promote open discourse, he says. In his 2009 book Rejecting Rights (Cambridge University Press), Bedi asks, “How should we limit democratic government?” He argues that limitation is necessary to ensure liberty.

The puzzle of free speech, he says, is why we treat speech philosophically in a different way than we do action, and why society criminalizes harmful actions but hesitates to suppress harmful speech. It is a conundrum, he says, that cannot be resolved easily: How do we safeguard our freedom of speech, which is crucial to a democratic society, while protecting society from the damage words can cause?

The English philosopher John Stuart Mill, whose work the students read at the beginning of the course, argued that all opinions should be expressed freely—even minority opinions that are offensive to the majority, because truth can be found only in an open exchange of ideas. In the U.S. legal system this notion has led to ever fewer restrictions on acceptable forms of expression, Bedi points out.

“The idea that we have the right to say whatever we want has become embedded in our culture,” says Bedi, citing U.S. Supreme Court decisions that have steadily expanded free speech protection. In some recent cases, he says, the court had an opportunity to set boundaries but chose not to. In Snyder v. Phelps (2011), for example, the court sided 8-1 with the pastor of Westboro Baptist Church (WBC), a congregation that regularly protests at military funerals to demonstrate its opposition to societal acceptance of homosexuality. The Supreme Court case stemmed from a suit brought against WBC pastor Fred Phelps and members of his family by Albert Snyder, the father of a Marine who claimed that Phelps and his church had, among other things, intentionally inflicted emotional distress by protesting on a public sidewalk outside the Marine’s funeral and defamed the divorced Marine on the WBC website for raising his son Catholic. In its ruling the court maintained that speech on a public sidewalk cannot be held accountable for emotional distress.

Justices fear that any limitations on freedom of expression will have a chilling effect, says Bedi, but there are other democratic values to consider. “Saying whatever you want may very well violate equality,” he says. Since hate speech and slurs are predominantly directed at less powerful groups and tend to silence those attacked, Bedi contends such speech inhibits the kind of deliberative exchange of ideas advocated by Mill. Bedi asks his students to consider whether society should favor free speech more than values such as equality and, if not, how to find the right balance.

George Helding ’14, a double major in history and government now working for Illinois Gov. Pat Quinn, says he tends to favor free speech, even offensive and hateful speech, but considers other points of view to be valid. “People get very emotional, and our differences of opinion are very fundamental,” he says. “The choice comes down to the framework through which you see the issue.”

Max Gottschall ’15 says Bedi’s class has made him question unbridled freedom of expression. Gottschall, a government and theater major who is considering law school, says that some limits on freedom of expression don’t pose a threat to freedom. Canada, he argues, remains a healthy democracy even though it regulates certain offensive forms of expression. “Maybe we Americans are a bit too afraid of the slippery slope,” he says.

The Tolerant Society, by Lee C. Bollinger (Oxford, 1988). “The Columbia president and former Dartmouth provost offers a provocative, even counterintuitive defense of freedom of speech that places ‘extreme speech’ at the center rather than the periphery of the First Amendment.”

The First Amendment: A Reader, edited by John H. Garvey and Frederick Schauer (West, 1996). “A second edition that provides an excellent introduction to the historical, doctrinal and philosophical debates regarding the First Amendment.”

Free Speech and its Relation to Self-Government, by Alexander Meiklejohn (Harper and Brothers, 1948). “The classic democratic, self-governance justification of why freedom of speech is so special.”