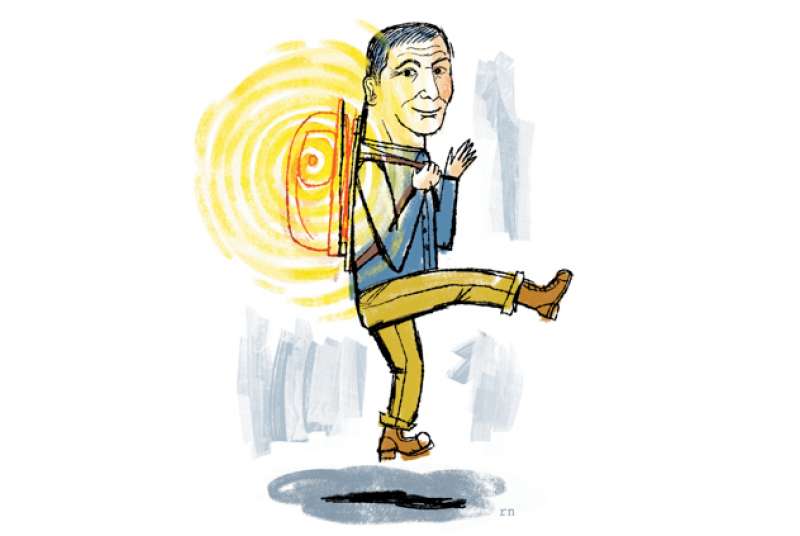 Rome’s revolutionary HoverGlide backpack makes a 60-pound pack feel as though it weighs 48 pounds. The pack uses suspended-load technology—it slides up and down its frame via bungee cords—and reduces what the UPenn biology prof calls “accelerative vertical force.”

Rome worked on the project at the request of the U.S. Navy, which asked him if he could invent a method to draw energy from soldiers’ movements to power batteries and portable generators they carry on patrol in Afghanistan’s withering heat.

“The technology adds about two pounds to the weight of the pack, but its contents exert much less force on you when you walk or run. It is the only device I can think of that increases the weight but reduces the dynamic forces,” Rome says. He believes this can cut the likelihood of joint injuries and reduce muscle soreness.

While waiting for his invention to wind its way through the military’s procurement process, Rome saw a business opportunity. Two years ago he created the HoverGlide, a consumer version of the backpack that goes on sale this summer. Unlike its military counterpart, HoverGlide doesn’t generate or store electricity.

People in diverse fields, including firefighters and photographers, have written Rome to express interest in buying HoverGlides. The most surprising email came from a Swedish beer company that wanted to use his backpack in a video ad to show customers that its stabilizing ability would keep beer from being shaken up.

Rome had previously worked with the Navy to create a submersible device based on his decades of research into fish muscles. Rome hopes Dartmouth students will find his new invention useful—especially when climbing Mount Moosilauke. When he went on his freshman trip in 1970, he struggled uphill burdened by a duffel bag strapped to a WW II pack board. “It was brutal,” he recalls.