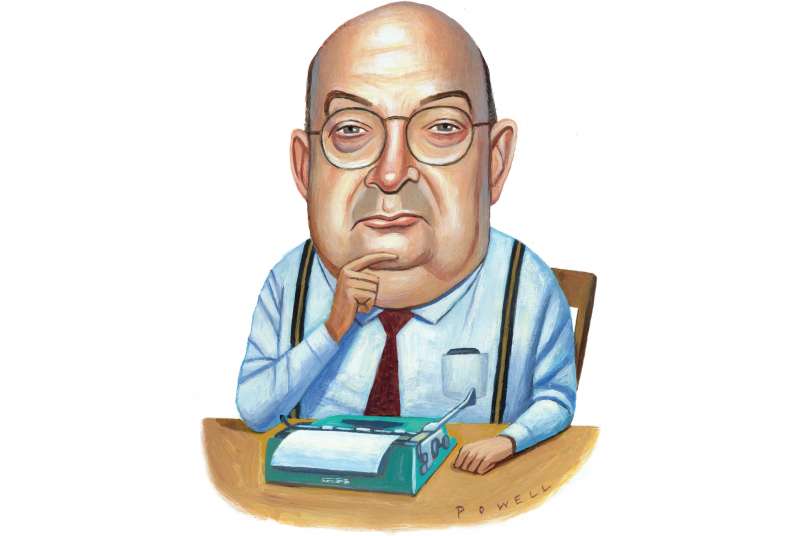 A few tidbits about journalist, Francophile and eater A.J. Liebling ’24, one of those famous alums who never graduated.
Sue Shock | May - Jun 2017

To mark the 70th anniversary of A.J. Liebling’s autobiography, The Wayward Pressman, here’s a quick take on the former Jacko contributor who was tossed out of Dartmouth for cutting compulsory chapel too many times with, he later wrote, “my usual harebrained carelessness.” A prolific writer, he is perhaps best remembered for his many witticisms.

“Every sentence he wrote contains a kick, a bounce and a leap,” noted Jack Shafer in Slate in 2004. Two years earlier Sports Illustrated named Liebling’s 1956 book about boxing, The Sweet Science, the greatest sports book of all time. In 2010 writer Adam Gopnik called Liebling’s serialized article on Louisiana governor Earl Long the “best single piece ever to appear” in The New Yorker.

2
He cracked himself up.

3
Winter was not his friend.

“We used to nail the window shut in the fall and keep it that way until spring,” Liebling once reflected on his student days. He didn’t think much better of the food at Dartmouth and asked his parents to send him candy, olives, anchovies and other delights.

Liebling studied at the Sorbonne, loved French food and was awarded a Cross of the French Legion of Honor for his reporting from Normandy and Paris during World War II. Gouty and overweight, he did not consider himself much of a war correspondent. “There is an old saying that a girl can sleep with one man and still not be a trollop, but let a man cover one little war and he’s a war correspondent,” Liebling wrote in 1943 in this magazine. “Dashing is the pulpwriter’s word for war correspondent, but I have never dashed any place except when impelled by extreme fear.”

Liebling was determined to write for the New York World after hearing Dartmouth professor John Mecklin, in a required freshman survey course, declare it the only paper that told the truth about the great steel strike of 1919. To catch the attention of the World’s city editor, Liebling paid an out-of-work Norwegian seaman $2 a day to walk in front of the World’s main entrance for three days wearing a sandwich board that read, “Hire Joe Liebling.” The editor, who always used a rear entrance, never saw the sign. Liebling made his money back later when he sold the story of his failed ploy to two magazines.

6
He knew all about fake news.

Liebling is remembered as one of the greatest press critics ever. Two of his most memorable quips: “People everywhere confuse what they read in newspapers with news” and “The function of the press in society is to inform, but its role in society is to make money.” As for the First Amendment and the rights of journalists, he said, “Freedom of the press is guaranteed only to those who own one.”