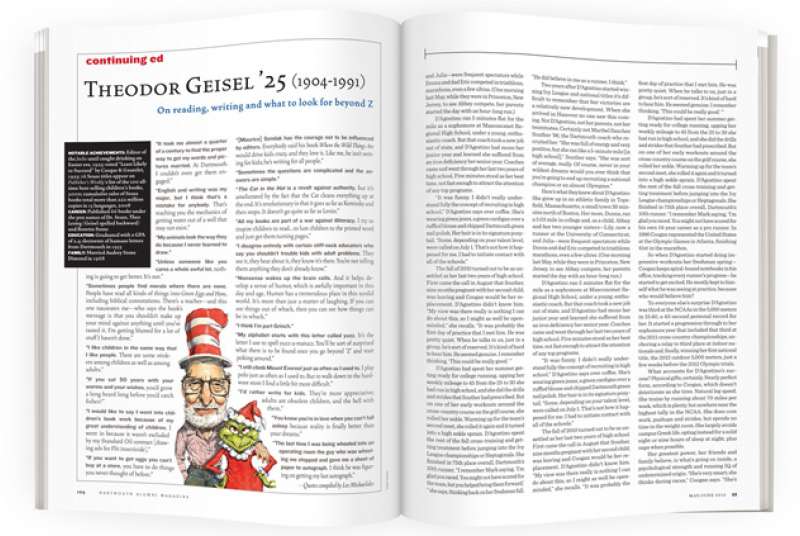 Dr. Seuss on reading, writing and what to look for beyond Z.
Compiled by Lee Michaelides | Sept - Oct 2009

Education: Graduated with a GPA of 2.4; doctorate of humane letters from Dartmouth in 1955

“It took me almost a quarter of a century to find the proper way to get my words and pictures married.At Dartmouth I couldn’t even get them engaged.”

“English and writing was my major, but I think that’s a mistake for anybody.That’s teaching you the mechanics of getting water out of a well that may not exist.”

“My animals look the way they do because I never learned to draw.”

“Unless someone like you cares a whole awful lot,nothing is going to get better. It’s not.”

“Sometimes people find morals where there are none.People have read all kinds of things into Green Eggs and Ham, including biblical connotations. There’s a teacher—and this one nauseates me—who says the book’s message is that you shouldn’t make up your mind against anything until you’ve tasted it. I’m getting blamed for a lot of stuff I haven’t done.”

“I like children in the same way that I like people.There are some stinkers among children as well as among adults.”

“If you sat 50 years with your worms and your wishes,you’d grow a long beard long before you’d catch fishes!”

“I would like to say I went into children’s book work because of my great understanding of children.I went in because it wasn’t excluded by my Standard Oil contract [drawing ads for Flit insecticide].”

“If you want to get eggs you can’t buy at a store, you have to do things you never thought of before.”

“[Maurice] Sendak has the courage not to be influenced by editors.Everybody said his book Where the Wild Things Are would drive kids crazy, and they love it. Like me, he isn’t writing for kids; he’s writing for all people.”

“Sometimes the questions are complicated and the answers are simple.”

“The Cat in the Hat is a revolt against authority, but it’s ameliorated by the fact that the Cat cleans everything up at the end. It’s revolutionary in that it goes as far as Kerensky and then stops. It doesn’t go quite as far as Lenin.”

“All my books are part of a war against illiteracy. I try to inspire children to read…to lure children to the printed word and just get them turning pages.”

“I disagree entirely with certain stiff-neck educators who say you shouldn’t trouble kids with adult problems.They see it, they hear about it, they know it’s there. You’re not telling them anything they don’t already know.”

“Nonsense wakes up the brain cells. And it helps develop a sense of humor, which is awfully important in this day and age. Humor has a tremendous place in this sordid world. It’s more than just a matter of laughing. If you can see things out of whack, then you can see how things can be in whack.”

“My alphabet starts with this letter called yuzz.It’s the letter I use to spell yuzz-a-matuzz. You’ll be sort of surprised what there is to be found once you go beyond ‘Z’ and start poking around.”

“I’d rather write for kids. They’re more appreciative; adults are obsolete children, and the hell with them.”

“You know you’re in love when you can’t fall asleepbecause reality is finally better than your dreams.”

“The last time I was being wheeled into an operating room the guy who was wheeling me stopped and gave me a sheet of paper to autograph.I think he was figuring on getting my last autograph.”