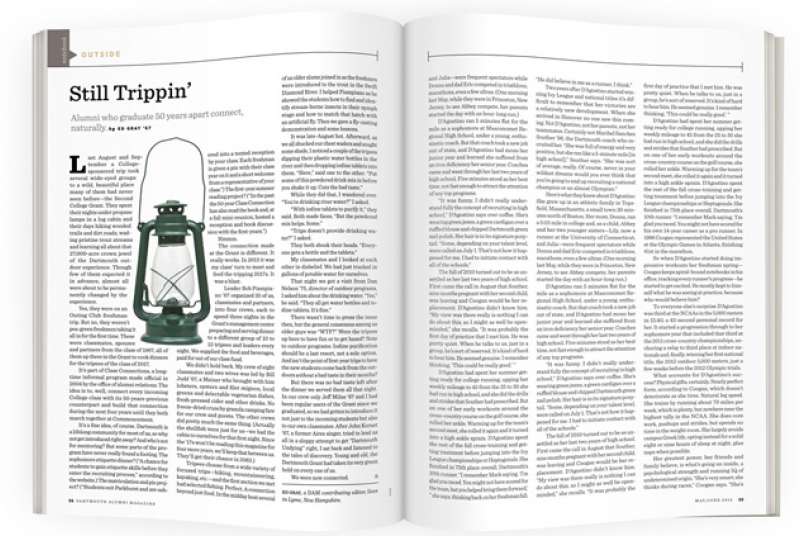 Last August and September a College-sponsored trip took several wide-eyed groups to a wild, beautiful place many of them had never seen before—the Second College Grant. They spent their nights under propane lamps in a log cabin and their days hiking wooded trails and dirt roads, wading pristine trout streams and learning all about that 27,000-acre crown jewel of the Dartmouth outdoor experience. Though few of them expected it in advance, almost all were about to be permanently changed by the experience.

Yes, they were on an Outing Club freshman trip. But no, they weren’t pea-green freshmen taking it all in for the first time. These were classmates, spouses and partners from the class of 1967, all of them up there in the Grant to cook dinners for the tripees of the class of 2017.

It’s part of Class Connections, a longtime informal program made official in 2004 by the office of alumni relations. The idea is to, well, connect every incoming College class with its 50-years-previous counterpart and build that connection during the next four years until they both march together at Commencement.

It’s a fine idea, of course. Dartmouth is a lifelong community for most of us, so why not get introduced right away? And who’s not for mentoring? But some parts of the program have never really found a footing. The sophomore etiquette dinner? (“A chance for students to gain etiquette skills before they enter the recruiting process,” according to the website.) The matriculation and pin project? (“Students exit Parkhurst and are ushered into a tented reception by your class. Each freshman is given a pin with their class year on it and a short welcome from a representative of your class.”) The first-year summer reading project? (“In the past the 50-year Class Connection has also read the book and, at a fall mini-reunion, hosted a reception and book discussion with the first-years.”)

The connection made at the Grant is different. It really works. In 2013 it was my class’ turn to meet and feed the tripping 2017s. It was a blast.

Leader Bob Piampiano ’67 organized 35 of us, classmates and partners, into four crews, each to spend three nights in the Grant’s management center preparing and serving dinner to a different group of 10 to 12 tripees and leaders every night. We supplied the food and beverages, paid for out of our class fund.

We didn’t hold back. My crew of eight classmates and two wives was led by Bill Judd ’67, a Mainer who brought with him lobsters, oysters and filet mignon, local greens and delectable vegetarian dishes, fresh-pressed cider and other drinks. No freeze-dried crunchy granola camping fare for our crew and guests. The other crews did pretty much the same thing. (Actually the shellfish were just for us—we had the cabin to ourselves for that first night. Since the ’17s won’t be reading this magazine for four more years, we’ll keep that between us. They’ll get their chance in 2063.)

Tripees choose from a wide variety of focused trips—hiking, mountaineering, kayaking, etc.—and the first section we met had selected fishing. Perfect. A connection beyond just food. In the midday heat several of us older alums joined in as the freshmen were introduced to the trout in the Swift Diamond River. I helped Piampiano as he showed the students how to find and identify stream-borne insects in their nymph stage and how to match that hatch with an artificial fly. Then we gave a fly-casting demonstration and some lessons.

It was late-August hot. Afterward, as we all shucked our chest waders and sought some shade, I noticed a couple of the tripees dipping their plastic water bottles in the river and then dropping iodine tablets into them. “Here,” said one to the other. “Put some of this powdered drink mix in before you shake it up. Cuts the bad taste.”

While they did that, I wandered over. “You’re drinking river water?” I asked.

“With iodine tablets to purify it,” they said. Both made faces. “But the powdered mix helps. Some.”

They both shook their heads. “Everyone gets a bottle and the tablets.”

My classmates and I looked at each other in disbelief. We had just trucked in gallons of potable water for ourselves.

That night we got a visit from Dan Nelson ’75, director of outdoor programs. I asked him about the drinking water. “Yes,” he said. “They all get water bottles and iodine tablets. It’s fine.”

There wasn’t time to press the issue then, but the general consensus among us older guys was “WTF?” Were the tripees up here to have fun or to get hazed? Note to outdoor programs: Iodine purification should be a last resort, not a sole option. And isn’t the point of first-year trips to have the new students come back from the outdoors without a bad taste in their mouths?

But there was no bad taste left after the dinner we served them all that night. In our crew only Jeff Milne ’67 and I had been regular users of the Grant since we graduated, so we had gotten to introduce it not just to the incoming students but also to our own classmates. After John Kornet ’67, a former Aires singer, tried to lead us all in a sloppy attempt to get “Dartmouth Undying” right, I sat back and listened to the tales of discovery. Young and old, the Dartmouth Grant had taken its very green hold on every one of us.

We were now connected.