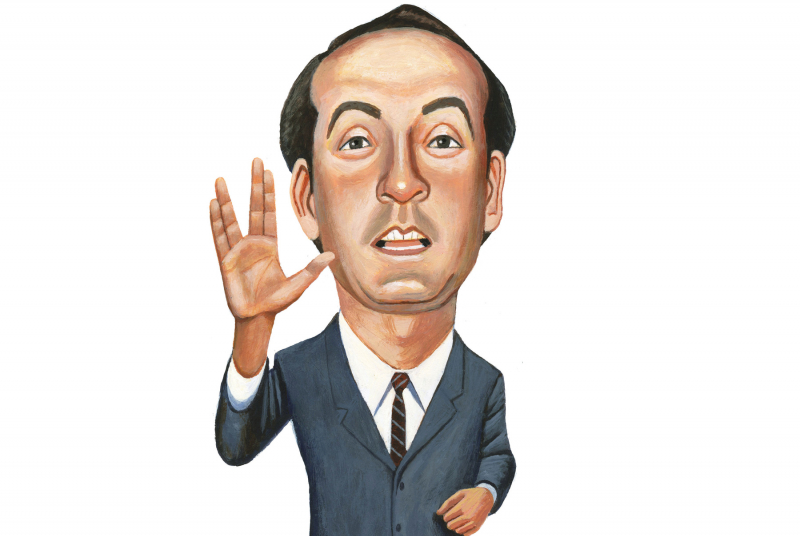 Did TV and film wunderkind Herb Solow ’53 boldly go where no man has gone before? Indubitably!
Sue Shock | September-October 2021

Star Trek, the television show, exists because of Herb Solow,” NBC programming executive Grant Tinker ’47 said after he made a 1964 deal with his fellow alum. “It was only our respect for Herb that led us to buy the show.” Solow, who died last year at 89, was a VP of production at Desilu Studios when he refined Gene Roddenberry’s basic sci-fi “Wagon Train to the Stars” idea and pitched it to his former colleagues at NBC. CBS had turned it down—the network already had Lost in Space—and NBC jumped at the opportunity to make Star Trek. The series aired from 1966 to 1969 and has spawned a multibillion-dollar universe of spinoffs, sequels, fan conventions, and merchandise.

During his long career as a studio executive, screenwriter, producer, director, and talent agent, Solow worked at NBC, CBS, Desilu/Paramount, and MGM, where he teamed with notable film directors such as Robert Altman, David Lean, and Blake Edwards. Solow later ran his own production company and was a part-time lecturer at the University of Wales. “Never retire!” he advised others. Or, as Mr. Spock would say, “Live long and prosper.”

Before Streaming
At Desilu, Solow developed and sold three eventual classics to three networks in one week: Mission: Impossible to ABC, Mannix to CBS, and Star Trek to NBC. He did it again later for MGM with Medical Center (CBS), The Courtship of Eddie’s Father (ABC), and Then Came Bronson (NBC).

Saving Spock
Solow convinced Roddenberry to keep the original Spock’s pointed ears but lose the long tail and red face. “The Mr. Spock character was the devil!” Solow said. “A lot of Gene’s thinking was very obvious.” Solow also had the idea to present Star Trek as if it had already happened. “I made a key change whereby we treated every episode, the whole series, as a flashback and invented stardate,” he said. “The captain’s log set up each show.”

Future Fortune
Lousy ratings doomed the starship Enterprise: NBC canceled the show after three years. Today some critics rank it among the top shows of all time and call it “the most influential science fiction TV series ever produced.” It’s been in syndication since the 1970s, and the value of the franchise is light years beyond what anyone could have imagined.

He Could Play Ball
Solow played semi-pro baseball after high school and was offered a contract with the New York Giants. He didn’t accept it—his father, an art dealer, expected him to go to college instead. (Solow’s mother died when he was a child.) Solow played baseball at Dartmouth, where he majored in English, drama, and art history. He was a member of the Dartmouth Players and Gamma Delta Chi.

The Old Mailroom Cliché is True
After graduation Solow worked in the mailroom at a talent agency to learn about the entertainment industry. “I ended up with my Ivy League degree going into the mailroom at the William Morris Agency and becoming a mail boy,” he said. “It’s the best post-graduate school anyone could ever attend.”

Green Connections
In 1969, as VP in charge of theatrical and television production at MGM, Solow wrote to Warner Bentley, director of the College’s theater programs from 1928 to 1960 and director of the Hop from 1960 to 1969: “As I sit overseeing the production of upwards of $50 million and the running of a 275-acre film studio, I sometimes think back to the beginning of it all, which was, in effect, Robinson Hall.” Robinson housed the drama department when Solow was a student.