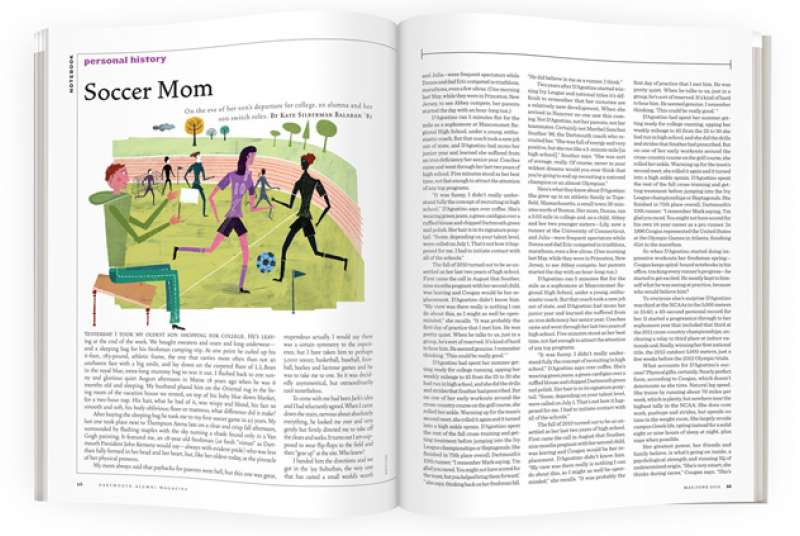 On the eve of her son’s departure for college, an alumna and her son find themselves switching roles.
Kate Silberman Balaban ’81 | Nov - Dec 2009

Yesterday I took my oldest son shopping for college. He’s leaving at the end of the week. We bought sweaters and coats and long underwear—and a sleeping bag for his freshman camping trip. At one point he curled up his 6-foot, 185-pound, athletic frame, the one that carries more often than not an unshaven face with a big smile, and lay down on the carpeted floor of L.L.Bean in the royal blue, extra-long mummy bag to test it out. I flashed back to one sunny and glorious quiet August afternoon in Maine 18 years ago when he was 6 months old and sleeping. My husband placed him on the Oriental rug in the living room of the vacation house we rented, on top of his baby blue down blanket, for a two-hour nap. His hair, what he had of it, was wispy and blond, his face so smooth and soft, his body oblivious; floor or mattress, what difference did it make?

After buying the sleeping bag he took me to my first soccer game in 25 years. My last one took place next to Thompson Arena late on a clear and crisp fall afternoon, surrounded by flashing maples with the sky turning a shade found only in a Van Gogh painting. It featured me, an 18-year old freshman (or fresh “viman” as Dartmouth President John Kemeny would say—always with evident pride) who was less than fully formed in her head and her heart, but, like her oldest today, at the pinnacle of her physical prowess.

My mom always said that paybacks for parents were hell, but this one was great, stupendous actually. I would say there was a certain symmetry to the experience, but I have taken him to perhaps 3,000 soccer, basketball, baseball, football, hockey and lacrosse games and he was to take me to one. So it was decidedly asymmetrical, but extraordinarily cool nonetheless.

To come with me had been Jack’s idea and I had reluctantly agreed. When I came down the stairs, nervous about absolutely everything, he looked me over and very gently but firmly directed me to take off the cleats and socks. It turns out I am supposed to wear flip-flops to the field and then “gear up” at the site. Who knew?

I handed him the directions and we got in the ’99 Suburban, the very one that has carted a small world’s worth of sports equipment and water bottles, snacks, trash and sweaty boys. This time it was largely empty and clean, and he drove. We pulled into the parking lot, 10 minutes short of the requisite hour-in-advance. (Parents, children—it is always the same, get there an hour ahead of time so you can be sufficiently overheated and overanxious by game time.) “Whoa momma,” he points out, “those women look young!”

Thanks, Jack. I have signed up for an over-30 league. One of my most perspicacious friends explained to me that this means everyone will be between 30 and 32—definitely not 48. Ever the optimist, I didn’t believe her, but they are young indeed. Nobody else has gray up top and they don’t appear to be color-your-hair types either. I’m terrified, but he pushes me out of the car. I look back and his face is already buried in Sports Illustrated. I know then that of all the things I have taught him over the years perhaps the most important is to always have reading material ready and waiting in the car.

With great trepidation I approach one of the two groups of gathered women, praying that this is the Psychedelic Furs and not the opposition. The women nod, no extended introductions, and I am handed a jersey. I have forgotten my $25 in my purse in the car so I walk back. When I open the door Jack’s oversize smile greets me and he asks what’s wrong. I tell him nothing is wrong, yet. I just need money. He asks if they are nice. I say they are fine, I’m fine, don’t worry, and the radical role reversal is complete.

By game time he has ambled up to the field. I notice a couple of the women watching him, probably thinking: Who is this big, handsome young man and why is he watching us? I answer silently: He is watching me, just as I have watched him for many years, and I am so proud I could burst.

The whistle blows and I am going against a tall 31-year-old who has evidently played a hell of a lot of soccer, and recently. The first few minutes are brutal. They pass me the ball, but I throw it away. I cannot mark her—I can’t keep up with her. I can’t even breathe. But then I look up at Jack and he smiles, that magical and calm and poised smile, and I feel his warmth and confidence and I can run with them. I make a play and another and then there is a throw-in and I arc the ball up to my very husky and demanding young teammate (the same one who had said before the game that she couldn’t play many minutes because she has to save herself for Sunday football on the mall). She passes it back to me, and I blow by the defender and hear them all exclaim, “Nice play, Kate,” and I know it will be all right. I can run, I can handle, I can pass, but mostly I can hustle, because I have spent 18 years teaching my three sons, above all else, to hustle.

On the ride home Jack tells me I was great, more athletic than most of them. I wonder if he’s lying. I don’t think I ever lied to him. I have a lot of faults and character flaws, but sycophancy isn’t one. Still, I wonder, did some other soul slip that in to him along the way? With great seriousness he counsels me to practice all the time, every day—practice matters the most. And I know then he is mine, all mine.

By next Saturday he will be gone, so I will go to that game alone. But he was there for my first, just as I was at his first. Paybacks are stupendous.

Kate Silberman Balaban and her husband, Mike, live in Washington, D.C., with sons Jack, 19, Hank, 16, and Joe, 12. She watches lots of athletic contests when not practicing law at the Justice Department.