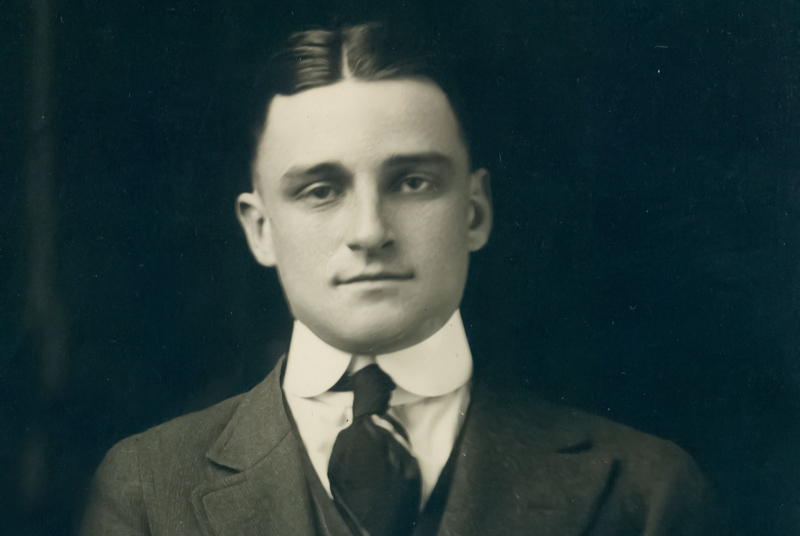 Leighton Rogers, class of 1916, kept a journal of more than 200 handwritten pages when he worked at a U.S. bank in Saint Petersburg, Russia, and witnessed the Bolshevik Revolution in November 1917. Steven Fisher, who discovered Rogers’ journal in the Library of Congress, transcribed and annotated it for his book Into Russia’s Cauldron. These excerpts from Rogers’ journal cover several days in December 1917—a few weeks before he fled the country.

This morning on my way to the bank I was greeted by the sight of the personification of free Russia disporting itself in the street—a soldier gloriously drunk. With one end of his shirt held fast by a sober friend who seemed to have him completely under control, the drunken one gyrated from side to side, his arms whirling windmill fashion and his dribbling lips opened wide in curses and song. He saw our little group making its way down the street, and dived for it head long, shouting, “Bourgeoisie, kill them.” The firm grip on the shirttail hauled him back, and he turned to strike, lost his intention in the muddle of his mind and threw his arms about his friend’s neck kissing him effusively.

There were more in similar condition on the streets during the day and we finally learned that the soldiers had broken into the wine cellar in the Winter Palace. The cellar is half full of water, and the men sent to inspect it with a view to bailing it out I suppose, only got drunk and had to be bailed out themselves. But an enormous party has been going on there for a day and a night now; the square is littered with splintered glass, the corners piled with drunken soldiers and the vicinity crackles with the shots from the rifles of the drunk, shooting at nothing or anything. They roved up the streets in bands, fully armed, working their will on whomever they meet; new groups hurry down the quay, eager to share in the festivity, some even with baskets for carrying the stuff away. I walked home behind a group whose combined breaths would have run a steamboat; their arms and pockets were full of bottles, they sang and laughed and swore. They were planning to sell what they had taken and I learned later that this was being done, at the rate of ten roubles a bottle. The whole city shows sign of the carousal. Broken bottles along the sidewalks and strewn on the ice in the canals all signify to it. In all it is said that three regiments are helpless. The Winter Palace itself is a wreck and we hear that many in the cellar slipped into the water and being too drunk to save their lives by swimming, lost them there. Free Russia!

Concerning this levy of a warm article of clothing exacted from each “rich” apartment, which I mentioned not long ago, when the list came around we wrote down one very good blanket. We received notice from the door tender, who heads the Committee in our home, that this was not enough, that we must give more. The colossal nerve of it. Here we are strangers, we have to give nothing at all, but when we do offer a very good article, more is demanded. It fairly makes one’s blood boil to think that American citizens are subject to such things as this. We are forced to do it under threat of violence.

These things are said to be for the army and if it were any other army in the world I would gladly give much that I actually need myself, but I know these soldiers will sell what they receive for money to buy cigarettes and vodka with, their very lack of warm things now is due to their selling the equipment given them by the government. Can one be blamed for not feeling generous towards such sodden bits of humanity as leered about the streets last night after the raid on the Winter Palace wine cellar?

There is nothing save apprehension as to what will happen tomorrow. This is the day set for the Constituent Assembly—the day towards which all Russia has been looking since the overthrow of the monarchist government. It was to be one of the most momentous days in Russian history. And now what has become of it. The Bolsheviks, with their avowed policy of force, say that the Assembly will be allowed to meet but that if it shows signs of a bourgeoisie majority, they will dissolve it and hold another election! Na.ve! We hear that the Assembly will not convene tomorrow, that it is to be postponed; also that if such is the case the streets will run with blood etc. etc.

There will be nothing of the kind. The Assembly will not meet because the Bolsheviks fear it and will not permit it, and there will be no disturbances in the streets. The fire of the popular rage will consume to ashes the very spirit which kindled it and the populace will settle back with a gasp into the old apathy once more.

Played bridge at Mr. Stevens’ tonight and particularly enjoyed some raspberry tarts he had. A great journal this—from Constituent Assemblies to raspberry tarts! I don’t know which I consider more important.

Big holiday today—the sun shining and low, as if by request, flags flying from all houses, banners flung across the streets—at night the streets brightly lighted and special performances in the theatres. For it was the day upon which the Constituent Assembly was to meet. No, gentle reader, it did not meet—the Bolsheviks postponed it until they announced “four hundred of its delegates should arrive in Petrograd.” So all this celebration was for nothing and the people did nothing save walk around and look at it. Nothing.

Of local importance there is nothing much today. All business is nearing the point of actual immobility; at present it is but running on its momentum. The strike in the State Bank and the ministries continues; the banks can get no cash, and consequently can do no business. It has been thus since the end of last week, with a spasmodic opening of the doors for an hour on one or two days. And at these times no more than one thousand roubles can be paid out to one customer. So we drag along each day; on each one hoping that the following will disclose an improvement in the situation. But we have been hoping this for eight months now and it has grown steadily worse. It is not a cheerful future.

The city sinks deeper into the slime of anarchy each night. Every morning brings an augmented report of looting, holdups, rapes, and murders; and so bold has lawlessness become that now she does her work in broad daylight. My Russian teacher boarded a tram which took up the Nevsky to the square where are the Hotel Europe and the City Duma. A crowd had gathered here about a group of men in an argument, consisting of some members of the Red Guard and a most respectable looking man in civilian clothes and carrying a leather portfolio. As her car approached she saw this man leaning over as if looking for something; farther and farther down he went until he was doubled up jackknife fashion. She ejaculated to the man beside her in the tram, “Look at that man, what is he doubled up about; what is he looking for?” The answer came, “Didn’t you hear the report; he has just been shot.” And sure enough, the victim suddenly relaxed like wire untempered, dived to a heap on the snow, and lay still. Roger Smith, at the bank, was on his way home from the theatre in an “ishvestik” last night when they turned a corner to find themselves almost in the midst of a group of workmen, all armed, two of whom were screaming in argument. One of these broke away and ran towards Roger’s sleigh, another darted from the crowd shouting, “я иду товарищ” [“I’m going, comrade”], leveled his gun and shot the runner in his tracks about ten feet from the rearing horse.

This evening Fred started out for the Y.M.C.A. and had no more than closed the door behind him when a fusillade of shots broke out behind him, several drunken members of the Red Guard ran past, and more shooting followed. He felt a sudden distaste for exercise and returned home. Even as I sit here writing this I can now and then hear shots, and not long ago one cracked out not more than one hundred feet from my window. We are in strange times, times far back in the ages, times of the cave-man and the mastodon, when the latter is master of the earth because of his enormous tusks and thick skin—weapons and armor.

You May Also Like
Red Alert
When Russia erupted in bloody revolution, young banker Leighton Rogers, class of 1916, bolted from the Bolsheviks.