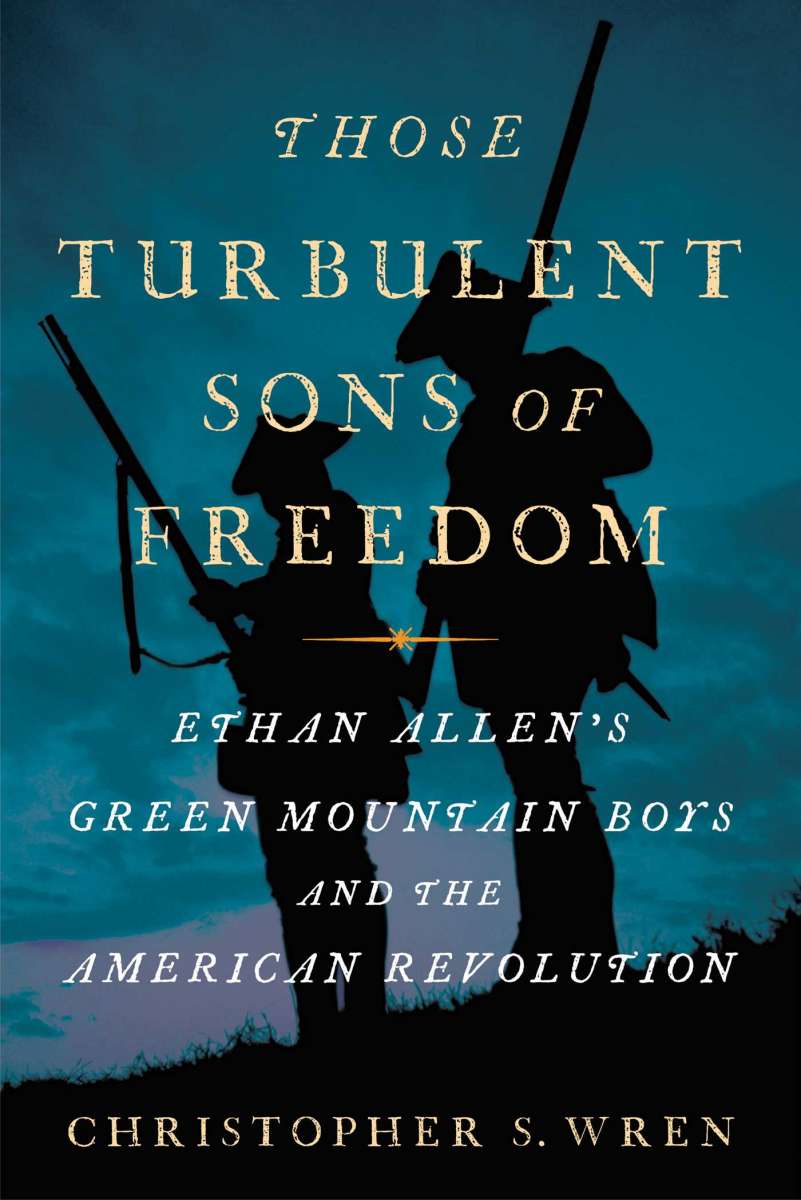 Popular fury over the British raids on Lexington and Concord demanded retaliation and what more enticing target than Fort Ticonderoga? In a wilderness without roads, the star-shaped fortress was situated to dominate an inland waterway from Montreal to New York City, with land portages linking the St. Lawrence River and Lake Champlain to Lake George and the Hudson River. And Ticonderoga contained a trove of heavy artillery.

Ethan Allen and Benedict Arnold bickered over who should lead the assault. Arnold had his commission from Massachusetts, but Allen had the Green Mountain Boys. “What shall I do with the damned rascal? Shall I put him under guard?” Allen asked one of his men, who suggested that they enter Fort Ticonderoga side by side. Allen ordered Arnold to stay at his left hand, but Arnold rushed ahead anyway.

The Green Mountain Boys followed Ethan Allen through a wicket door left open in the main gate. A startled British sentry aimed, misfired, and fled, taking his pursuers to a small parade ground and stone barracks inside the slumbering fort. A second sentry lunged with a bayonet, but Allen’s sword struck him. He begged for his life and pointed out the stairway to the quarters of the post commander. Arnold raced Allen up the wooden steps and banged on the door with his sword. A pale British officer appeared, breeches in hand, to ask by whose authority Allen and Arnold demanded his surrender. One of Allen’s men heard Allen holler, “Come out of that hole, you damned old rat.” He was later credited with a more pungent salutation: “Come out of there, you sons of British whores, or I’ll smoke you out!”

Allen had banged on the wrong door. The British officer staring down his drawn blade was not the fort’s captain, William Delaplace, but a recently arrived lieutenant, who had been awakened about half past three by whoops and cries of “No quarter, no quarter!” He opened the door to see “armed rabble” pushing their way upstairs. The defenders in the barracks had been caught in their beds. It was over in ten minutes.

Benedict Arnold again presented his orders from Massachusetts. Ethan Allen insisted that Connecticut had authorized him to take the fort. If the British fired a single shot, Allen warned, no man, woman, or child would be left alive.

Captain Delaplace emerged from his quarters to surrender the small garrison, which included two dozen bewildered women and children. They didn’t know that war had broken out in Massachusetts. Benedict Arnold offered to treat Delaplace like a gentleman if he handed over his sword and pistols, but never returned them.

Ten miles to the north, Seth Warner ferried a hundred Green Mountain Boys across to take Crown Point and its meager garrison of nine redcoats and ten women and children.

At the southern end of Lake Champlain, thirty more Green Mountain Boys overran Skenesborough and seized Philip Skene’s small schooner moored in the bay. They invaded the crypt containing his deceased wife, whose will bequeathed an income to Skene so long as she lay above ground. The Green Mountain Boys yanked her corpse from the lead-lined casket, which they carted off to melt into musket balls. Philip Skene had yet to return but his son and two daughters were captured. The Skene girls were escorted to freedom in Montreal by a Green Mountain Boy who billed the Connecticut legislature £150 for travel expenses. He reported that Quebec’s French-speaking peasants were praying for the Americans to liberate them from British rule.

At Fort Ticonderoga, more rough men landed from the lake and joined the search, which uncovered Captain Delaplace’s stash of rum. Ethan Allen preempted the liquor, he said, “for the refreshment of the fatigued soldiery.” He and his Green Mountain Boys drank dry all ninety gallons. “The sun seemed to rise that morning with a superior luster,” Allen recalled of their binge, “and Ticonderoga and its dependencies smiled on its conquerors, who tossed about the flowing bowl”—brimming with Delaplace’s rum—“and wished success to Congress, and the liberty and freedom of America.” Connecticut had to reimburse Delaplace for the rum.

Benedict Arnold wanted Ethan Allen sacked. “Colonel Allen, finding he had the ascendancy over his people, positively insisted that I should have no command, as I had forbid the soldiers plundering and destroying private property,” Arnold complained. “The power is now taken out of my hands, and I am not consulted, nor have I a voice in such matters.”

The quarrel over command led Allen and Arnold to draw swords, until a private ordered them to behave. Arnold kicked Allen’s deputy for disrespecting him. “Colonel Allen is a proper man to head his own wild people, but entirely unacquainted with military service,” Arnold told his Massachusetts backers, “and as I am the only person who has been legally authorized to take possession of this place, I am determined to insist on my right, and I think it my duty to remain here against all opposition, until I have further orders.”

Connecticut reminded Massachusetts that Ethan Allen was in charge. A commission written on the spot directed him to “keep the command of said garrison, for the use of the American Colonies, till you have further orders from the colony of Connecticut or from the Continental Congress.”

While Ethan Allen caroused with his men, Benedict Arnold took inventory of the captured artillery, counting as many as 130 salvageable guns. Digging among the ruins at Crown Point later, the Americans unearthed nearly a ton of iron and lead shot buried when ninety-six barrels of gunpowder blew up in the 1773 fire. The conquest of Fort Ticonderoga grew grander in the retelling. “The soldiery behaved with such restless fury, that they so terrified the king’s troops that they durst not fire on their assailants, and our soldiery were agreeably disappointed,” Allen told the Massachusetts Provincial Congress. He gave Arnold no credit.

Both Arnold and Allen were aware how vulnerable the fort was to recapture. When fifty of his recruits at last appeared, Arnold, a seasoned sailor, pressed them into a crew on Skene’s schooner, now armed with small cannon and swivel guns. He sailed the schooner past the northern tip of Lake Champlain into the Richelieu River, where Arnold’s men boarded a British seventy-ton sloop, anchored off the Canadian frontier town of St. Johns (now called Saint-Jean), and overpowered the sloop’s crew. They disarmed a dozen more British troops and their sergeant at the small fort onshore.

The northerly wind whipped around to fill the sails of Arnold’s schooner as it escorted the prize sloop and several barges laden with British prisoners, weapons, and supplies. Fifteen miles below St. Johns, Arnold met Ethan Allen and his men rowing their flat-bottom barges hard against the wind. Arnold shared his supplies and, over a meal, warned that the British were reinforcing St. Johns. Allen wanted to capture it and landed his Green Mountain Boys across the river at St. Johns where they passed a miserable night swatting off mosquitoes. By dawn, they came under cannon fire from British reinforcements. Allen beat a retreat to his barges, abandoning several men, two of whom got captured. He made light of his narrow escape, likening the incoming grapeshot to music “both terrible and delightful.”

Allen’s escapades prompted more irritation than gratitude in high places. When he asked New York for weapons, ammunition, and provisions—“we are in want of almost every necessary (courage excepted)”—his urgent appeal was forwarded to the dithering Second Continental Congress, which was reluctant to break with Britain. Allen dispatched the British colors seized at Fort Ticonderoga to Congress, which denounced its seizure as “unwanted and unauthorized.” Some delegates complained that Ethan Allen had spoiled prospects for a reconciliation with the Crown.

But elsewhere throughout the colonies, the fall of Britain’s northern Gibraltar ignited a patriotic pride. On May 10, 1775, Ethan Allen’s irregulars, without artillery, bayonets, or uniforms, had forced British regulars to surrender their Union Jack. Britain had squandered blood and treasure—eight million pounds sterling by one estimate—to expel France from North America, only to see Fort Ticonderoga and Crown Point fall into the hands of rustic rebels. A makeshift American navy with two hijacked sailboats was the new master of Lake Champlain, the vital waterway linking Canada and the American colonies. Within weeks, Congress reconsidered its neutrality and selected Ticonderoga as a springboard for a preemptive invasion of Canada.

Cadwallander Colden, now the king’s acting governor in New York, blamed it all on the Green Mountain Boys. He informed Britain’s secretary of state for the American colonies that “the only people of this province who had any hand in this expedition, were that lawless people whom your lordship has heard much of under the name of the Bennington mob.”

Excerpted from Those Turbulent Sons of Freedom: Ethan Allen’s Green Mountain Boys and the American Revolution by Christopher S. Wren. Reprinted by permission of Simon & Schuster.