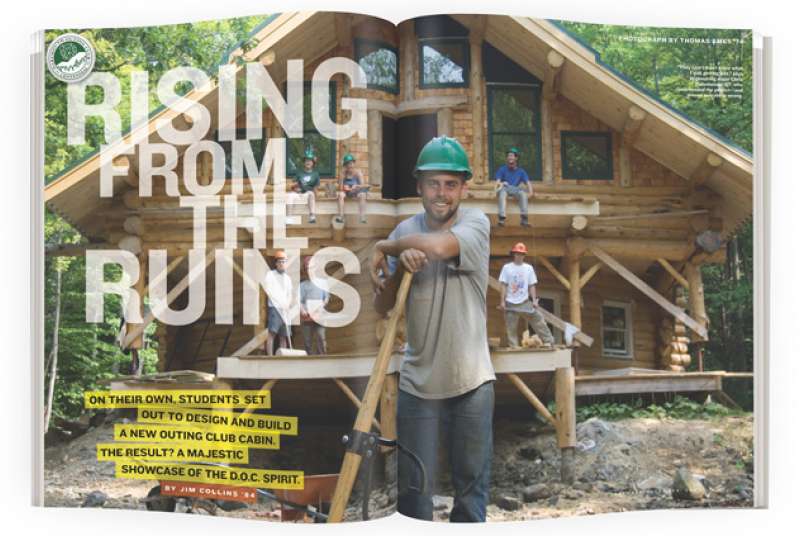 Rising from the Ruins

On their own, students set out to design and build a new Outing Club cabin. The result? A majestic showcase of the DOC spirit.
Jim Collins '84 | Nov - Dec 2009

Chris Polashenski ’07 first hiked out to Harris Cabin during the spring of his freshman year and he saw a pile of rubble and rotting wood, with scrub and weeds overtaking the clearing. The scene depressed him. He had absorbed a lot of Dartmouth Outing Club history hanging around Robinson Hall by then and understood how rich the club’s heritage was. The condition of Harris Cabin hit a nerve. At that time, he recalls, with the DOC struggling and no permanent director in place, “the whole organization seemed to be in disrepair.”

When Andy Harvard ’71 was hired as outdoor program director in 2004, he saw what had become of Harris and said it looked like something had died there.

The pile of rubble Polashenski gazed on had once been a DOC showplace. Built in 1950, 45-feet long, with room to feed 60 people, the impressive log building was one of five cabins that legendary woodcraft advisor Ross McKenney built with undergraduates, and it was the first to be named after an alumnus: DOC founder Fred Harris, class of 1911. With the club approaching its hundredth anniversary, Polashenski felt ashamed at the current state of Harris’ legacy.

Sitting at the base of Moose Mountain in Etna, just seven miles from campus, Harris was the closest of the many cabins in the outing club chain, and it was an easy walk in. By rights it should have been home to weekly feeds and first-year high jinks. But its access to locals and availability to students had long pegged it as a party spot, and Dartmouth’s increasingly strict alcohol policies had made it increasingly popular for non-DOC uses. Carved up with graffiti and shot up with bullet holes, Harris became known as a place of drunken rowdiness, theft and vandalism. It made headline news when Dartmouth student David Wolfson ’92 died in an alcohol-related car crash following a party there in the spring of 1991.

The DOC’s Cabin & Trail division—no stranger to dealing with hard use in its cabins and shelters—finally gave up trying to maintain Harris in 1992. Soon after, the club made plans to burn the building to the ground. A letter sent out to the Friends of the Outing Club by David O. Hooke ’84, though, led to a stay of execution. It wasn’t a bad building, Hooke argued, just bad people. After several years of being shuttered Harris was put in line to be repaired and repurposed as a members-only cabin. Then came the winter of 2001, and the neglected 50-year-old structure collapsed under a heavy snow load.

The DOC hadn’t taken on a large-scale project since the rebuilding of Great Bear Cabin in 1990. But the recent construction of a shelter higher up Moose Mountain had reintroduced some critical log-building skills to members of Cabin & Trail, and the club’s cabin replacement fund, endowed by Richie Smith ’26, had been growing steadily. (The class of 1966 would later contribute $160,000 to help with the construction and maintenance costs.) Polashenski submitted a 40-page proposal to Harvard in the fall of 2004. An engineering major with a background in carpentry, Polashenski promised to personally guide the construction of a new Harris Cabin through to completion, even committing time after graduation, when he would be at the Thayer School working on his Ph.D.

Harvard wanted to make sure such a big project had broad consensus and involvement. He immediately heard strong reservations from some of the old-timers who worried that the Harris location would continue to invite abuse and that Polashenski didn’t fully appreciate the enormity of the task he was signing up for. Since the retirement of McKenney decades earlier, most of the new cabin construction in the DOC had not been initiated by students but by administrators Al Merrill or Earl Jette ’55, with much of the actual work subcontracted to professionals.

But Polashenski was not a typical Chubber. “I’ve never known a Dartmouth student who was so motivated, persuasive and capable,” says Hooke. “Chris had seen stuff that no Dartmouth student sees. He came from coal country in Pennsylvania, was familiar with big equipment, he’d used dynamite before and he wasn’t scared by any of it. He was just a fireball.”

Polashenski ultimately won everyone over, and Harvard promised the support and funding. When he made the announcement Harvard said this was just the kind of student-led project he wanted the club to return to. The first 140 spruce logs were cut in the Second College Grant and delivered to the College’s organic farm in January 2005.

In the two-plus years that followed Polashenski came to fully appreciate the concerns of the DOC elders, even as he bulldogged the project through. Hanover’s zoning board raised the requirements of the building, insisting the new cabin be a replica of the old one in size and scale yet still meet all current building codes. Polashenski, along with a core group of other students who were involved from the start, insisted on a majestic building, a signature piece that could sleep as many as the Moosilauke Ravine Lodge and be used by diverse groups for many kinds of gatherings. The conflicting requirements eventually led to a challenging rectangle-on-top-of-a-hexagon design, with corner porches, an open second-floor balcony and massive V-grooved logs with chinkless construction.

With no veterans like McKenney overseeing the work, Polashenski brought in old-time craftsmen from northern Vermont and the Adirondacks to help students through the trickiest spots of the cabin’s joinery. He found a mason on the DOC staff to salvage much of the old cabin’s impressive stone fireplace and rebuild its firebox. In the summer of 2006 the full-time student crew of seven took two days to winch the 14,000-pound kingpin-and-truss roof assembly into position. Part-time and volunteer crews scrambled to get the roof closed in by winter. Despite the mild weather that allowed them to work into January, they barely made it. An extraordinary amount of the work was done by students—some 25 or 30 who lived and worked full time at the site, maybe twice that number who volunteered several days or weeks of their time and hundreds of others who pitched in. “They never would have accomplished what they did if adult staff had been telling them what to do,” says Harvard.

“They did stuff I can’t believe Dartmouth students could do,” adds Hooke.

In addition to facing the challenges that come with any big construction project, Polashenki’s job—navigating town-gown politics, managing and scheduling, purchasing, motivating, ensuring the safety and cohesiveness of large student crews, juggling classes alongside this rolling freight train of full-time work— was a liberal education in itself. “They said I didn’t know what I was getting into,” he says, “and they were right. But I think it was probably good for them to be so discouraging. Anyone less serious about proving them wrong might not have been able to push through all the obstacles and red tape.”

Polashenski graduated in June of 2007. Two days later he was back at the work site, laying out tools and going over safety procedures with the first wave of the full-time summer crew. The new cabin had taken dramatic shape—the large-diameter logs gave the structure a more imposing, lodge-like feel than the old Harris, despite the same footprint. Hard-hat activity buzzed around the site as the chimney rose and the roof was prepared for standing-seam metal panels.

Polashenski, stocky, with a chinstrap beard and intense dark eyes, inspected the thin gaps in the log walls, gaps that were closing to nothing beneath the weight of the logs. Crew foreman Sean Mann ’05, in a ratty T-shirt and climbing harness hung with carabiners, hopped nimbly along the roof boards 20 feet off the ground, warning people below to stay out of the fall line. The old swimming hole next to the cabin had been dredged, the wooden sluice box rebuilt. A little shantytown of plastic and canvas spread through the woods on the far side of the brook, home to the crew for the next three months. On the ground next to the tarp-covered cooking and eating area a stump had been turned into a crude, makeshift clock: The wooden dial pointed to “WORK.” Much remained to be done. But the days were long, the crew was young, and Polashenski said they were committed to having the cabin ready by the start of first-year trips in the fall.

At the October 2007 dedication ceremony Harvard stood on the porch of the newly named Class of 1966 Lodge and addressed a gathering of alumni and students. “When doing the early stages of planning for this,” he said, “we wanted to talk to some of our peer institutions. And we realized we have no peer institutions.”

And then he talked of Polashenski and Mann and the 400 students who had a hand in making the building possible. But he was really talking about lineage and a special kind of education. “This,” he said, “represents the very best of Dartmouth.”