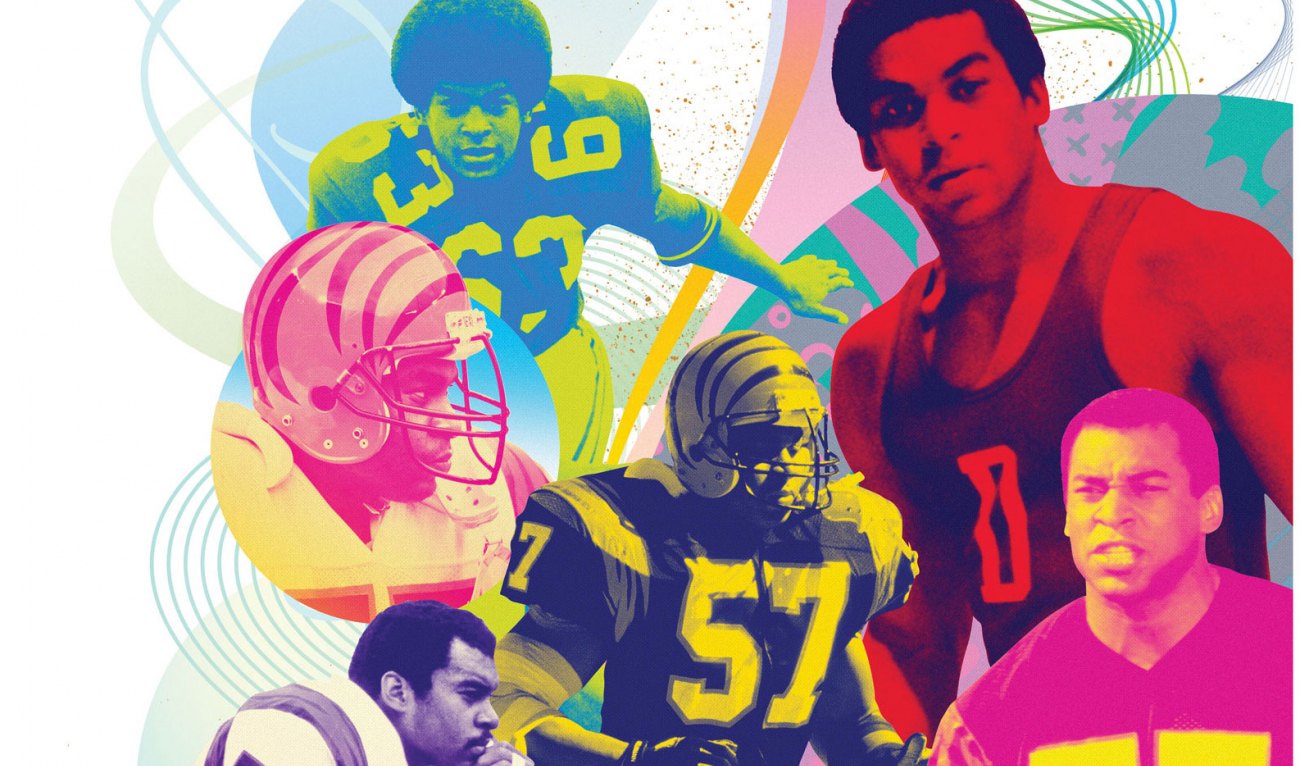 Linebacker Reggie Williams ’76 grabs the No. 1 spot on our list of the College’s best male athletes.
Deron Snyder | September-October 2022

If you were assigning odds on a race for Dartmouth’s greatest male athlete, the favorite’s résumé might feature a pair of Super Bowls and the second-most games played for an NFL franchise. Another favorite’s background might include a trio of first-team All-Ivy League selections in one sport, plus a first-team selection and league championship in a different sport.

Or you could simply circle the athlete who possesses all those attributes, thereby giving the title to Reggie Williams.

“He was just lights-out one of the best football players I’ve ever seen,” says current Dartmouth coach Buddy Teevens ’79, who scrimmaged against Williams as a freshman quarterback. A 2007 inductee into the College Football Hall of Fame and a recent nominee for the Cincinnati Bengals’ Ring of Honor, Williams stands among the greatest of all Ivy League athletes.

“I had no childhood aspirations of being a pro athlete or anything like that,” the hard-hitting linebacker says. He first touched a football at age 10, during one of the pickup games held on a field near his house in Flint, Michigan. “It’s where the big kids would teach the smaller kids how to play the game.”

He and his game blossomed at Dartmouth, he notes, thanks to the coaching he received. Williams excelled on the gridiron and the mat. Freshman football coach Jerry Berndt, who doubled as the wrestling coach, helped convert the fullback to linebacker, and Williams was named captain on the first day of practice. A four-year wrestler, Williams won the Ivy heavyweight championship as a junior and was an All-Ivy selection as a senior.

The football team was dominant, having won three consecutive Ivy League titles when Williams made varsity as a sophomore. His season debut was delayed because a hit-and-run driver clipped him as he walked across a street that summer. But missing three games didn’t stop Williams from leading the team in tackles and being named to the All-Ivy and All-East teams as Dartmouth won its fourth consecutive championship.

The team slipped from its lofty heights, but Williams soared higher. At 6-foot-1 and 228 pounds, he was the Ivy League’s most impactful defender during his career. He still holds Dartmouth’s record for all-time unassisted tackles (243). He’s second in career tackles (370). He was named the team’s most valuable junior and senior, and he was an All-American his final season.

“The Ivy League wasn’t intimidating. The NFL was a tremendous challenge.”

Selected by Cincinnati in the third round of the 1976 NFL draft, Williams began his 14-year career by making the All-Rookie team. He started for the Bengals every season and eventually became the franchise’s most productive linebacker. He holds team records for sacks (62.5) and interceptions (16) at his position. He played 206 games, one shy of the team high held by two other players.

Williams says he had to increase his drive in the NFL. “The Ivy League wasn’t intimidating,” he says. “The NFL was a tremendous challenge.” He found ways to crank up the intensity. “I didn’t use any air conditioning during training camp, and I slept on the floor,” he says. “On the day of the game, I never ate. I always had apple pie à la mode the night before the game, like I was a condemned prisoner eating my last meal. My mentality on game day, as a psych major, was constructed to intimidate.”

The Bengals grew to rely on Williams, who played best when the stakes were high and the lights were brightest. He led the team with 11 tackles in Super Bowl XVI, a loss to the San Francisco 49ers. Seven years later, in another Super Bowl loss to the Niners, Williams had a team-high 10 tackles and a sack.

His legacy includes two years on the Cincinnati city council—during football season. He later served as an executive in pro football and with the Walt Disney Company.

Williams made a difference wherever he went and remains a Dartmouth legend. As one former teammate, Delaware Gov. John Carney ’78, notes: "He's the best player physically Hanover has ever seen."

You May Also Like
Blood, Sweat, and Tears
Despite a life of hard knocks, Reggie Williams ’76 keeps on keeping on.