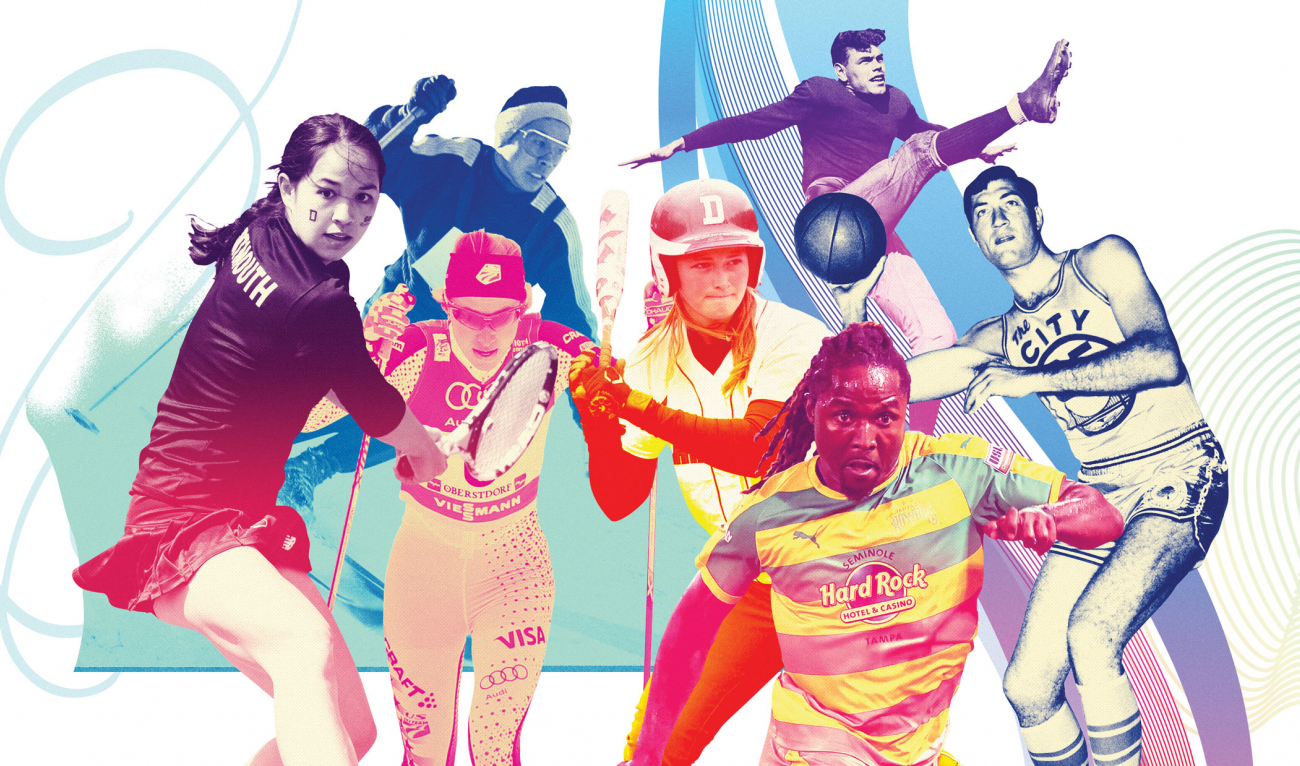 With no easy algorithm available to determine the greatest alumni athletes, we appointed a seven-person panel to tackle the job. They convened to assess, argue, and, ultimately, decide.

DAM’s charge: Rank alumni athletes on their overall athletic performance as players while at the College and during their postgraduate careers. 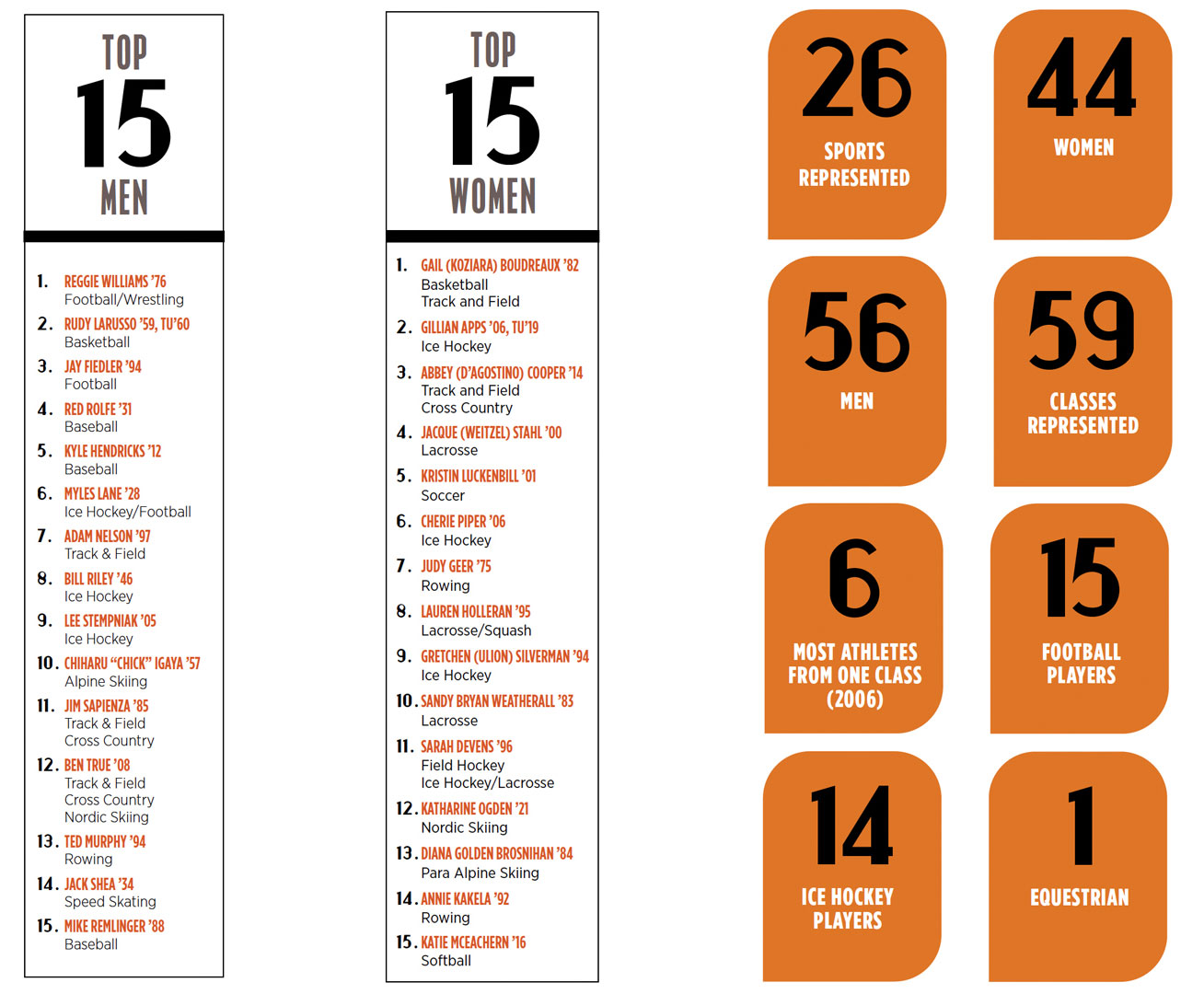 Panelists conducted their own research, looking over lists of All-Americans, numerous Dartmouth Olympians, and the Wearers of the Green (the College’s honor roll of students, alumni, and coaches “who have met specific criteria for athletic excellence in their respective sports,” according to the Wearers website). The pandemic limited discussions to Zoom, and the panelists faced a bevy of questions. How to compare athletes from a century ago—or even decades ago—to today’s better conditioned achievers? Should an Olympic equestrian rank with an Olympic hurdler? How can sports such as squash and sailing be measured against football, basketball, and hockey? How can football, basketball, and hockey be measured against each other? How is it possible to weigh those with mainstream professional careers against athletes without such opportunities? What about an athlete who could have had a pro career but chose not to? Does it matter if an athlete’s collegiate career was abbreviated? Should there be an attempt to include all Dartmouth sports in our Top 100? Is it acceptable that a sport with a storied history be underrepresented because its success has been rooted in exceptional teams rather than individual stars? Should there be an attempt to reflect all eras? Should the number of women on the list be stipulated?

And, of course: Should the panel even heed the magazine’s suggested guidelines? (Dartmouth folks are nothing if not independent thinkers.)

After being assured their detailed discussions would be kept private, the panelists carefully considered candidates’ merits and made passionate arguments. Among their queries: “If an athlete wasn’t good enough to be deemed one of the best on campus while I was there, that person doesn’t deserve to be in the Top 100.” “If a person was best in their so-called minor sport, they deserve to make the list more than someone who was sixth-best in his or her bigger sport.” “Is that really a sport?” During one lively debate a panelist cracked, “If he doesn’t make it, I know I’ll be hearing about it for the rest of my life.” Unfailingly, however, our panelists were open to all opinions and put personal knowledge of—and friendships with—candidates aside, which made for some tough decisions. If you don’t agree with them, direct your ire at DAM, not our panelists, who deserve only praise for handling the assignment. 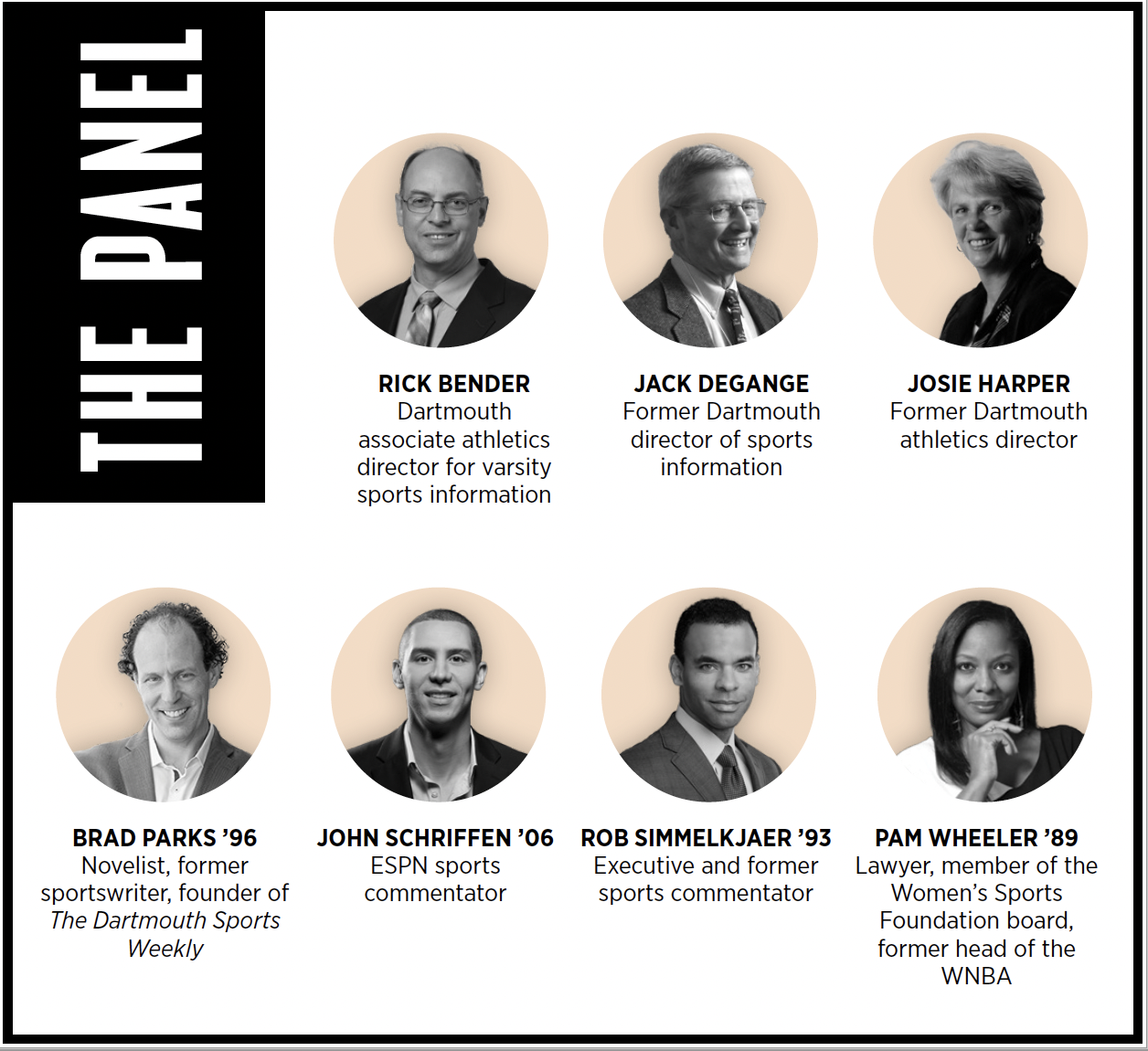 The panel ultimately decided to generate a single list of 100 athletes. Members convened three times to deliberate, and they saved themselves a lot of arguments by ranking only the Top 15 female athletes and the Top 15 male athletes. The other 70 alumni athletes round out DAM’s “100 Greatest,” but in no particular order. In the print issue we presented the Top 15 rankings and a total of 50 athletes. An additional 50 are included here in our online “Best of the Rest” feature.

Sports have always been part of the Dartmouth zeitgeist, and with 35 varsity teams, 33 club teams, and a variety of intramural teams, that isn’t going to change anytime soon. So as we celebrate the College’s greatest athletes, we also tip our hats to all athletes who’ve been part of the Dartmouth sporting life through the decades. They know that although wins and losses matter, it’s how you play the game that matters most.