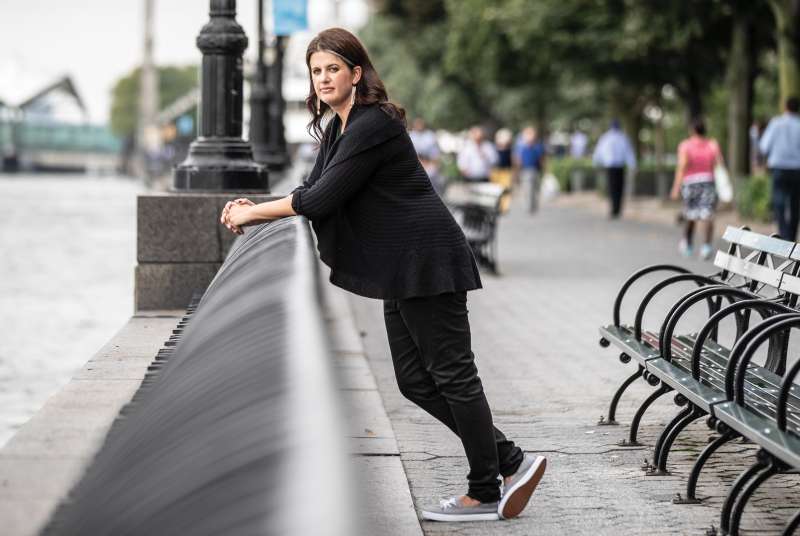 Human rights lawyer Becca Heller was in her downtown Manhattan office when she noticed a few missed calls from a Chicago number. Her first thought was that something had happened to her grandmother, so when her phone rang again, she answered.

“This is so-and-so with the MacArthur Foundation,” the voice said. “Are you in a place where you can have a confidential conversation?”

She knew about the John D. and Catherine T. MacArthur Foundation fellowships—otherwise known as “genius” grants—which honor individuals in diverse fields who’ve shown “exceptional creativity” and a “promise for important future advances.” The prestigious fellowship comes with a no-strings-attached $625,000 award, distributed across five years. Yet how fellows are chosen is a mystery. Most winners are not household names, though past winners include writer and producer David Simon, who created The Wire; playwright Lin-Manuel Miranda, who wrote Hamilton; and the writer and critic Susan Sontag.

The voice spoke again: “Congratulations! You’ve been selected as a MacArthur fellow.”

What happened next was mostly a blur. “They were trying to confirm details, like my mailing address, and they kept pausing and waiting for me to stop crying,” Heller recalls. “I said I could cry and tell them my address at the same time!” While she was still on the phone, she G-chatted her husband and shared the news, only to find out she could tell no more than one person before the embargo lifted on October 4. “I asked, ‘Does my husband count?’ I got real lawyerly about it,” she says. “Often there are special privileges for spouses, but no, I’d taken care of my one person already.”

It was the day after Labor Day. She’d have to keep the secret for another month.

“I want to be worthy of this.”

This year’s 25 MacArthur fellows include analytical chemist Livia Eberlin, choreographer and performer Okwui Okpokwasili, and pastor and social justice advocate William J. Barber II. And then there’s Heller, who spent the last decade changing the lives of immigrants and refugees around the world. She is executive director and cofounder of the International Refugee Assistance Project (IRAP), a “virtual” public interest law firm—likely the first of its kind, Heller says—that provides pro bono legal representation to refugees and displaced people escaping war, political upheaval, and persecution. With a $6.5-million budget—58 percent from foundations, 27 percent from individuals, 15 percent from corporate contributions and events—the nonprofit leverages pro bono resources, collaborating with 1,200 students from 29 law schools in the United States and Canada and attorneys from more than 120 international law firms and multinational corporations. Most clients communicate with their lawyers via email, text, or Whatsapp, a smartphone app that offers free international calling and receiving. In the last 10 years IRAP has assisted nearly 200,000 refugees through direct legal aid, its legal advice hotline, and legislation and litigation.

“There are these dominant narratives of refugees as victims who need help or terrorists trying to infiltrate our system,” Heller says. “Those are both inaccurate. Really, refugees are survivors. It is not easy to make it out of ISIS-occupied Mosul. To go through all of this and then be treated like a helpless victim or evil terrorist is quite tragic.”

If IRAP sounds familiar, that may be because the organization played a key role in fighting President Donald Trump’s January 27, 2017, executive order restricting people from seven majority Muslim countries from entering the United States. IRAP mobilized its network, sending lawyers to airports to help anyone who was detained. A client named Hameed Darweesh—who’d spent more than a decade working as an interpreter for the U.S. military in Iraq and obtained a special immigrant visa available to Iraqis who assisted American troops—was on one of the flights arriving at New York City’s JFK Airport the day the executive order was signed. “His wife and child came out of customs crying,” Heller says. “We had law students and a lawyer waiting for him, and they said Hameed had been locked up.”

Darweesh became a lead plaintiff in a class action lawsuit that led to the first court ruling against Trump’s travel ban. IRAP went on to win preliminary injunctions against two more versions of the ban and assist in related lawsuits, helping more than 21,000 refugees who would have been denied entry to the United States in 2017. “I had a way bigger problem with the fact that the travel ban discriminated against Muslims than with the stupid way it was implemented,” she says, “and that problem applies equally to the various versions, including the one being implemented now.”

Heller’s passion for social justice wasn’t driven by religion, family, or a life-changing personal struggle, and she’s “hyper-aware” of that fact. “I identify as Jewish, and I think there are good values in Judaism that I learned early that help drive what I do, but I wouldn’t view my motivation as primarily religious,” she says. “My parents’ careers were both public service-y, but the concerns at home were more that I achieved something with my existence.”

“What I do has never been a question for me. Life is really short, and we only get one shot at it, and I really want to make my shot count. Citizenship, as much as any other privilege, is truly an accident of birth. As a Jew, I think about that all the time. I could have been born in Poland in 1930, and I wasn’t. I was born in northern California in 1981. I didn’t do anything to deserve that. I just got super lucky. I feel an obligation to pay that luck forward.”

Heller grew up in the Bay Area, the daughter of a doctor and a teacher. She was a creative kid, and for years her father urged her to go into advertising. “You can do art and make money,” he’d told her. Instead, she set out to save the world.

She arrived at Dartmouth in the fall of 2001, and it took her only two months to realize that winter in Hanover was an experience she never wanted to repeat. “I went out in November with a friend who was from the Northeast, and I was like, ‘What’s the crinkly feeling in my nose?’ She said, ‘That’s your snot freezing.’ I was like, ‘f*** this.’ So I hacked the quarter system.” She spent summers on campus and studied abroad in the winters—in Costa Rica, Nicaragua, Cuba, New Zealand, and southern Africa.

“Becca was always a ball of fire,” says government  professor emeritus Ned Lebow. “She was extraordinarily capable. I’ve never seen a student quite like her before or since, and I just finished my 54th year of university teaching.”

Heller majored in government and pursued a senior fellowship on community gardens as a response to HIV-related malnutrition in areas with high levels of food insecurity. “Her project combined smarts with a passionate commitment to a cause,” says professor emerita Anne Sa’adah, Heller’s primary advisor. “She could make connections that other people might not make and was very impatient with conventional academics. Asking her to do a literature review—not gonna happen! She wanted to cut to the chase, and the chase, for her, was always how to help people or help them help themselves.”

After graduating she received a Fulbright to Malawi to work on nutrition policy as it affected people with HIV. Next stop: Yale Law School. During an internship in Tel Aviv between her first and second years, Heller spent a week in Jordan meeting Iraqi refugee families. She expected to find them struggling with everything—inadequate housing, healthcare, education. “That was true,” she says, “but their primary problem was a legal one. It wasn’t safe to go back to Iraq because something horrible had or would happen to them, but they couldn’t remain in Jordan. They were trying to get safely resettled to a third country, but the process was insanely bureaucratic, and no one knew how to navigate it.”

And so IRAP was born. Founded in 2008 by Heller and four Yale Law School students—one veteran of the Iraq and Afghanistan wars, one journalist who’d reported from Iraq, and two others who’d worked with refugees—IRAP has grown from a student organization to a 55-person nonprofit with field offices in Jordan and Lebanon. Heller says she’s worked on legislation with Senators John McCain and Jeanne Shaheen, which buoys a point Heller insists on: IRAP is nonpartisan. For some, the argument is a tough sell. As Sa’adah points out, “People on ‘our side,’ so to speak, always say we’re not political, but unfortunately the other side doesn’t see us that way.”

Not so for Scott Cooper, a Marine who now directs national security outreach for Human Rights First, which he calls a Republican human rights organization. “Human rights do not have a partisan flavor. Patriotism is not a partisan issue,” he says. “I’m uncomfortable with Becca sometimes. I’m an establishment person, not a protester. But she’s so fierce and unapologetic. I wish I had that kind of audacity. I so admire her work, because the courts may well be one of the ways we save America.”

That audacity, along with her commitment to what’s right and just, have made Heller a force to be reckoned with. As for those who oppose her work, she has one request: “If you went to Dartmouth, you got an elite, expensive education that allegedly taught you how to think critically. I just ask you to think for yourself and not take what your chosen candidate says,” she explains. “Is [the policy] good for the rule of law, our economy, and our democracy? Does it uphold American values?”

With her MacArthur fellowship Heller wants to expand IRAP’s litigation department and its footprint in Europe, focus on family unification (an effort she’s already begun in the Middle East and Greece), and continue fighting for refugee and asylum programs in the United States. “I really want to make the most of this opportunity for our clients and our work. I want to be worthy of this,” she says.

For hundreds of thousands of people around the world, Heller is their champion, their lifeline, perhaps even their savior. But for one 3-year-old girl in Brooklyn, she’s something else entirely: Mommy. “It’s really, really hard,” Heller says of being a working parent. “I’m working when I’m not with my kid—and sometimes when I am with my kid. If she doesn’t want to eat her dinner, I put on Daniel Tiger and make sure she’s having a kale smoothie and mac and cheese with one hand and bang out emails with the other hand.” None of it would be possible, she says, without her husband, a civil rights lawyer. “Given that a day is 24 hours and our economy is not set up for two people to both work and parent in a comfortable way in not-corporate jobs, I haven’t figured out how we’re gonna get there yet. Maybe in my next life.”

Abigail Drachman-Jones is an award-winning journalist in New York City. She serves on the DAM editorial board.