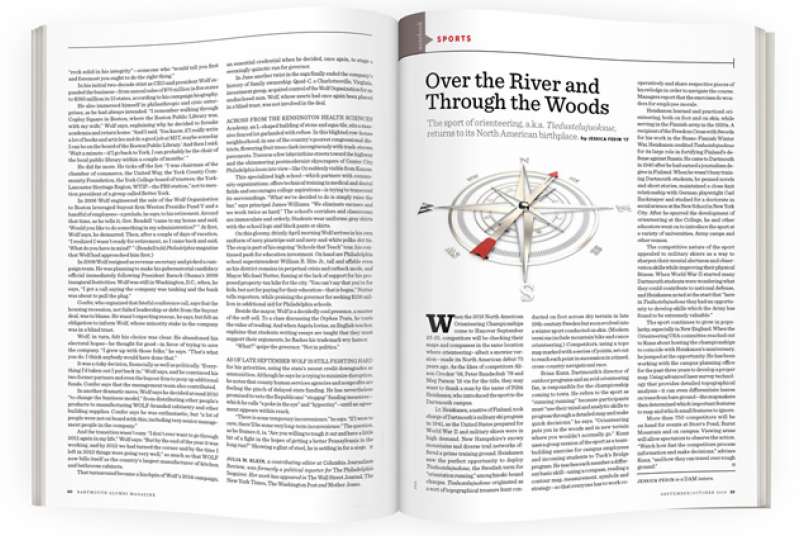 Over the River and Through the Woods

The sport of orienteering, a.k.a. Tiedustelujuoksue, returns to its North American birthplace.
Jessica Fedin ’17 | Sept - Oct 2016

When the 2016 North American Orienteering Championships come to Hanover September 23-25, competitors will be checking their maps and compasses in the same location where orienteering—albeit a snowier version—made its North American debut 75 years ago. As the likes of competitors Alison Crocker ’06, Peter Bundschuh ’78 and Meg Parson ’16 vie for the title, they may want to thank a man by the name of Piltti Heiskanen, who introduced the sport to the Dartmouth campus.

Lt. Heiskanen, a native of Finland, took charge of Dartmouth’s military ski program in 1941, as the United States prepared for World War II and military skiers were in high demand. New Hampshire’s snowy mountains and diverse trail networks offered a prime training ground. Heiskanen saw the perfect opportunity to deploy Tiedustelujuoksue, the Swedish term for “orientation running,” among his ski-bound charges. Tiedustelujuoksue originated as a sort of topographical treasure hunt conducted on foot across dry terrain in late 19th-century Sweden but soon evolved into a winter sport conducted on skis. (Modern versions include mountain bike and canoe orienteering.) Competitors, using a topo map marked with a series of points, set out to reach each point in succession in a timed, cross-country navigational race.

Brian Kunz, Dartmouth’s director of outdoor programs and an avid orienteering fan, is responsible for the championship coming to town. He refers to the sport as “cunning running” because participants must “use their mind and analytic skills to progress through a detailed map and make quick decisions,” he says. “Orienteering puts you in the woods and in new terrain where you wouldn’t normally go.” Kunz uses a group version of the sport as a team-building exercise for campus employees and incoming students to Tuck’s Bridge program. He teaches each member a different basic skill—using a compass, reading a contour map, measurement, symbols and strategy—so that everyone has to work cooperatively and share respective pieces of knowledge in order to navigate the course. Managers report that the exercises do wonders for employee morale.

Heiskanen learned and practiced orienteering, both on foot and on skis, while serving in the Finnish army in the 1930s. A recipient of the Freedom Cross with Swords for his work in the Russo-Finnish Winter War, Heiskanen credited Tiedustelujuoksue for its large role in fortifying Finland’s defense against Russia. He came to Dartmouth in 1940 after he had earned a journalism degree in Finland. When he wasn’t busy training Dartmouth students, he penned novels and short stories, maintained a close-knit relationship with German playwright Carl Zuckmayer and studied for a doctorate in social science at the New School in New York City. After he spurred the development of orienteering at the College, he and other educators went on to introduce the sport at a variety of universities, Army camps and other venues.

The competitive nature of the sport appealed to military skiers as a way to sharpen their mental alertness and observation skills while improving their physical fitness. When World War II started many Dartmouth students were wondering what they could contribute to national defense, and Heiskanen noted at the start that “here in Tiedustelujuoksue they had an opportunity to develop skills which the Army has found to be extremely valuable.”

The sport continues to grow in popularity, especially in New England. When the Orienteering USA committee reached out to Kunz about hosting the championships to coincide with Heiskanen’s anniversary, he jumped at the opportunity. He has been working with the campus planning office for the past three years to develop a proper map. Using advanced laser survey technology that provides detailed topographical analysis—it can even differentiate leaves on trees from bare ground—the mapmakers then determined which important features to map and which small features to ignore.

More than 750 competitors will be on hand for events at Storr’s Pond, Burnt Mountain and on campus. Viewing areas will allow spectators to observe the action. “Watch how fast the competitors process information and make decisions,” advises Kunz, “and how they can travel over rough ground.”

Jessica Fedin is a DAM intern.