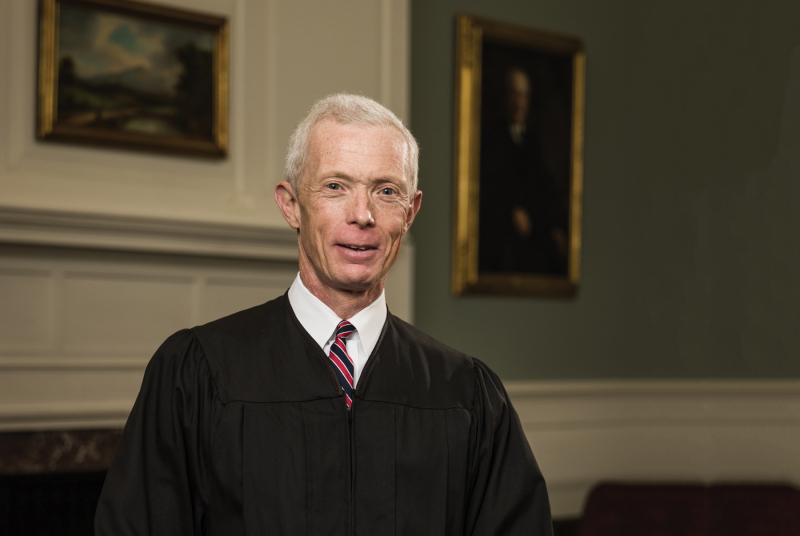 Rob Strong ’04
Voices in the Wilderness

Order in the Court

It took some back-and-forth before Gordon J. MacDonald ’83 became the 37th chief justice of the N.H. Supreme Court. He was originally nominated in 2019, but Democrats in control rejected him. Subsequent Republican gains in the statehouse led to his confirmation in March.

He had been the state’s attorney general since 2017. That followed years in private practice as a litigator. MacDonald has never served on the bench. “Appellate courts benefit from a variety of professional experiences and perspectives,” he says of being a rookie judge. His conservative pedigree includes his founding of the Granite State’s chapter of the Federalist Society eight years ago.

MacDonald, who lives with his wife, lawyer Jennifer A. Eber ’88, and daughter in a rural community 30 minutes from Concord, grew up on Occom Ridge. He attended public school in Hanover when his father joined the College faculty in 1972 as a professor of environmental studies. A government major who wrote his honors thesis on the 1980s peace movement in the Netherlands, the chief justice credits professors Gene Lyons and Nelson Kasfir for guiding his studies.

MacDonald views access to justice as the state’s most pressing legal problem. “More than 90 percent of litigants in some of our trial courts may be self-represented on matters involving issues of great importance—their safety and security, housing, healthcare, and access to governmental benefits,” he says. “Closing the access-to-justice gap is enormously important, and I am committed to addressing it.”