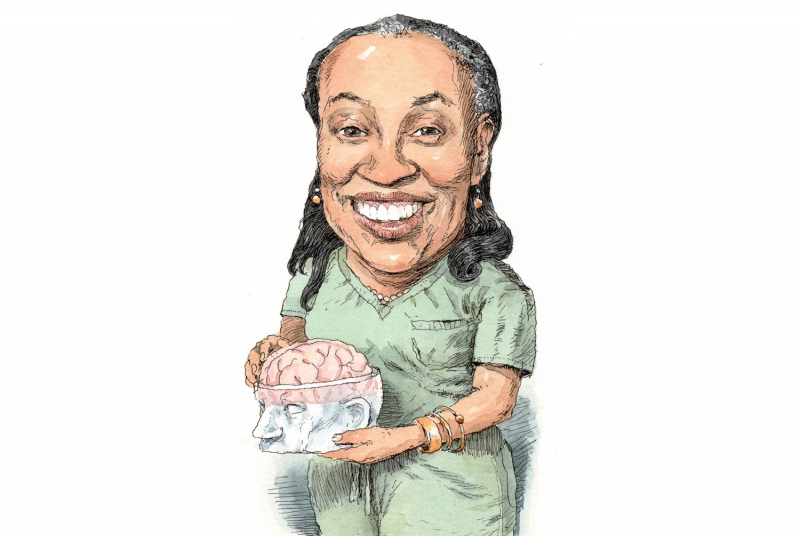 A neurosurgeon on being a disruptor
Lisa Furlong | January-February 2021

Notable: The only Black woman in her medical school class, one of two women in her residency program, and the second Black female professor of neurosurgery in the United States; immigrated with her parents as a child

Personal: Lives with her husband, Edward Sharp, and their daughters, Alister and Reece, in Los Altos Hills, California

“Being an immigrant has entirely defined me. It makes every difference in how you travel through the world. I am forever influenced and marginalized by both Jamaican and American cultures because of it.”

“My focus on traumatic brain injury (TBI) is deeply rooted in my immigrant history and wanting to give back. Deciding on my specialty was something I struggled with because I wasn’t sure a surgery specialty could help enough people. Focusing on trauma was a way to benefit larger populations. The public health aspect was appealing because of the tremendous need identified by the WHO in the developing world.”

“At an academic center your responsibilities are all tiers of the continuum. I see patients in clinic, in the ER, ICU, and OR for surgery—then there’s research. We’re expected to be on the bleeding edge.”

“I was the only Black kid in my section of 20 students in my secondary school, so that shaped my experience from very early. When I got to Dartmouth no one reached out to me, as they would now, to ask how I was doing, but I felt prepared.”

“I didn’t go to Dartmouth expecting to go into neurosurgery, and the complexity of it wasn’t something that struck me early on. I had a class junior or senior year that just blew me away. Then I got to work in a lab at the Medical School with Drs. Robert Maue and Leslie Henderson as part of my D-Plan.”

“When others are saying it’s not brain surgery…or rocket science? I’m telling myself, ‘It’s not that complicated.’ One of my favorite sayings is, ‘You have to eat an elephant one spoonful at a time.’ ”

“In its 2018 power rankings Ebony categorized me as a ‘disruptor,’ which made me laugh because neurosurgeons are such cookie-cutter ‘Goody Two Shoes.’ I believe it stems just from my coming to the United States, but I’m not afraid of disrupting the status quo.”

“My children have grown up in a Jamaican household with a Black mother and white father. Ours is a culture that embraces that duality, but it’s important for me that my daughters understand not everyone will embrace it also, that they need to be aware they are Black.”

“When my oldest daughter was 4 and we were living in Atlanta, she came home and asked, ‘Mommy, why am I not blonde?’ Despite living in an African American and Jamaican household, blonde was normative at her school. It was a wake-up call to me as a new parent that the external influences of the world can be quite powerful.”

“In medical school people came to meet me because I was ‘the only Black woman in the class.’ It was like I was a zoo animal. I’ve tried to share this feeling of extreme visibility with colleagues and just moved on because it wasn’t relevant to their experience—and we weren’t in a moment of history where people could appreciate the significance.”

“I’m known for being very fastidious in my dress. A big part of the reason is that I’ve felt I need to represent in a positive way.”

“I see the continuum of my role as an academic strengthened by serving as a trustee. The best advice I’ve received so far is, ‘It’s a 250-year legacy, don’t be so naïve as to think you can come in and shift anything.’ There needs to be respect for the fact I don’t know a lot.”