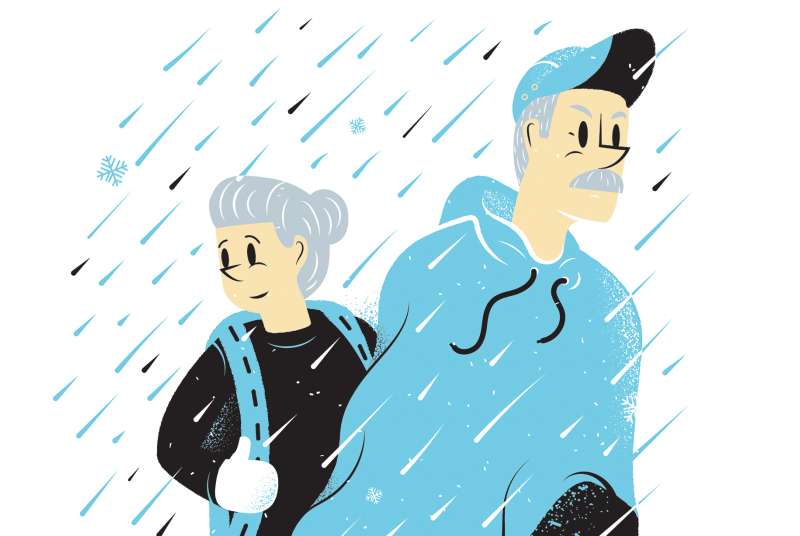 At the Mercy of the Mountain

A cold, rainy hike up Moosilauke tests the resolve of 50th-reunion climbers.
Lance Tapley ’66 | May - Jun 2018

Gale winds blasted sleet into my face. Ice coated the stunted spruce. Thick fog swirled around me, and I could hardly see the cairns marking the trail. It was June 9, 2016—almost summer—near the summit of Mount Moosilauke.

As the organizer of my class’ 50th-reunion climb of Dartmouth’s own New Hampshire mountain, I was dutifully following the last of my determined classmates to the summit. “Damn, would this guy keep on going?” I thought. His rain gear—a $2 transparent plastic poncho—was flapping in the wind. My fingers were freezing in thin liner gloves, and the slippery rocks challenged my no-longer-stellar sense of balance.

When I had suggested this undertaking to our class officers, I envisioned an easy, warm-weather jaunt. My first jolt into reality came when I learned about the 50th-reunion Moosilauke hike the year before. Its organizer, Dave Beattie ’65, told me one classmate’s wife had developed a leg problem and had to be carried off the 4,802-foot mountain on a stretcher by the N.H. Fish and Game Department’s rescue team. Another climber had wandered off for a time on the wrong trail. And that was on a nice, sunny day.

Beattie, who said he would accompany us, described what he wished he had done, and I began sending “Be Prepared” emails to the 50 classmates, wives and friends who had signed up, recommending clothing and other gear, setting a 1 p.m. turnaround and emphasizing that participants needn’t feel they had to summit. At the urging of my wife, Peggy, I even suggested what to do when someone had to pee, always a consideration for those of a certain age: A companion should ask climbers below to wait until the deed was done.

I couldn’t see our classmate ahead in the cloud. I struck off as fast as I dared.

I had already enlisted my imperturbable classmate and outdoor-adventure buddy Chuck Benson ’66 to be co-leader. He knew Moosilauke well. Five winters earlier we had skinned up the mountain and enjoyed a wild, five-mile ski down the Carriage Road, which in the 1920s saw one of the nation’s first downhill ski races.

In late May I began getting emails full of inauspicious comments such as, “Right now I am wondering if my knee would allow it…but a final climb up Moosilauke!” The day before the climb a message arrived from another outdoorsy classmate, Doug Hill ’66: “The NOAA upper-elevation forecast for Thursday is freeze overnight Wednesday, summits likely in cloud, possible rain or snow (50 percent), northwest winds 45 mph. A lower-elevation option may be useful.”

At dinner in the Ravine Lodge that evening, Chuck and I decided to suggest a hike for the less ambitious around the lower Al Merrill Loop Trail. We also felt we needed to try hard to keep the summit group together. We feared someone would get lost in a whiteout above the tree line. Chuck would lead. I would be last—the “sweep”—to make sure everyone was okay.

I had already warned hikers by email about the weather: I wanted everyone to be fully prepared, yet for some reason I resisted acting like a drill sergeant to my peers. I wouldn’t inspect their gear, nor would I tell anyone they couldn’t climb with us if they were ill-prepared. Instead, Chuck and I would try to keep tabs on each climber.

By mid-morning the next day, as we assembled in the lodge following its ample breakfast, a dozen people had dropped out, and five had decided to hike the Merrill loop. I gave a short reminder about proper clothing and our plans. I told everyone to sign the register on a dining-room table. Upon returning they would sign out. As descending hikers passed me, I would write their names in a little notebook.

I should have known that not everyone would get the memo. “Unfortunately, I brought nothing for my hands,” Howard Dobbs ’66, a cheerful classmate who lives in England, told me. I gave him my over mitts. I saw a couple of people in shorts who said they’d put on rain pants when they needed to. After we took a group photo of our 33 hikers, we headed up the Snapper Trail in the rain toward the shrouded summit 3.8 miles away. We planned to descend the same way.

For a time I chatted with Dave’s brother, Brian Beattie ’66. He was a nimble, boyish former All American skier, but I found myself trudging behind the extremely uncertain steps of another classmate. I was reminded that the physical condition of people our age can be dramatically different. Making matters worse, he had only a green cotton Dartmouth hoodie to protect him against the rain. As I gently tried to convince him to turn back, I began to have doubts about not having been a drill sergeant. Just as I concluded that I had to insist, he fell headfirst on the trail. Fortunately, he wasn’t injured, just much shaken. To my relief, a friend of his offered to guide him back to the lodge, and he accepted.

Despite our intentions, the hikers got spread out. The rain picked up, and the temperature dropped. On the Carriage Road, a wide trail dating from horse-and-buggy days, I met classmates turning back. With numb fingers it was hard to jot down names in my soggy notebook.

As our final group approached the tree line—including Peggy and Chuck’s wife, Rosa—we met people who had ventured beyond it into serious winds. One woman, seemingly well protected in a rainsuit, anxiously told me she was cold. I asked her companions to make sure she got to sheltered, warmer elevations before she developed hypothermia.

Beyond the last stand of icy trees, winds drove sleet laterally into us. Peggy, Rosa and I stayed behind that resolute classmate in the plastic poncho. Soon Chuck appeared. He had remained briefly on the summit after seeing off a few of the more able hikers who decided to go down the Gorge Brook Trail. I told him I needed to stay with this last man. Chuck said he would descend with Rosa and Peggy.

Older folks still want to prove themselves physically as they face the storms of age.

After stopping for 30 seconds, I couldn’t see our classmate ahead in the cloud. I struck off as fast as I dared. He soon appeared, having turned back. I stayed close behind him as we weaved down the mountain.

Back at the lodge, I joined climbers thawing out around the blazing fireplace. Dobbs returned my mittens—having nicely dried them on the mantel. I checked our register: all accounted for. Thankfully, those who hadn’t summited had turned back when they felt it wise to do so, and I guessed that most had at least gotten to the tree line. Brian and Dave Beattie had been in the group that hiked over the top and down Gorge Brook Trail. Another was big Steve Lanfer ’66, who did it in shorts and without a hat or gloves. Could I have told him he couldn’t climb? Later I joked with him that his endurance must have come from having been Outing Club president. He expressed regrets that he hadn’t worn proper clothing.

The next day a story in The Boston Globe gave me pause. While we were climbing, several ill-equipped older hikers had almost frozen to death on a nearby mountain and had to be rescued by a Fish and Game squad. By great contrast, my generally strong and sensible classmates had done well. As Chuck later noted, “There’s not a margin for error in such weather.” On the other hand, he noted, if everything is super-tightly controlled, “you take all the sense of adventure out of people’s lives.”

It may surprise some young people, but many older folks still want to prove themselves physically, including taking a bit of risk, as they face the storms of age and the world. Maybe that was what had motivated my classmate who fell. At the lodge after our hike the congratulations were exuberant: “Hey, pass the beer,” someone said. “It’s nice to be alive!”