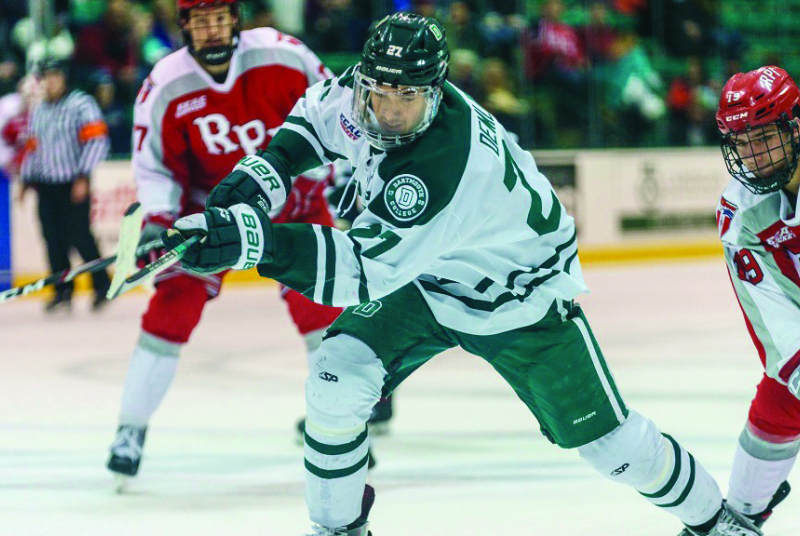 Approximately 170 Dartmouth games and athletic competitions were scrubbed from the schedule when the Ivy League canceled all winter sports for 2021. The November decision, made by the Ivy council of presidents, also dashed hopes for a spring football season and established the end of February as the earliest possibility for the resumption of Ivy athletic competition.

“The current trends regarding transmission of the Co-vid-19 virus and subsequent protocols that mustbe put in place are impeding our strong desire toreturn to intercollegiate athletics competition in a safe manner,” the council stated in a press release. Ivy athletes will not lose a season of eligibility—if they remain undergraduates.

Basketball player Brendan Barry ’20 won’t wait. The sharp-shooting guard remained at Dartmouth last year with hopes of playing this winter. Following the Ivy decision, he decided to graduate early and play at Temple University as a grad transfer. The Ivy League does not allow grad students to play sports. “Definitely heartbreaking,” says the New Jersey native.

Athletic director Harry Sheehy points to the difficult logistics of Covid-19 testing and protocols—along with accompanying concerns about housing, feeding, and transporting athletes during a pandemic—as factors behind the decision. Dartmouth’s athletics compliance officers have been swamped with requests for help from students attempting to understand their eligibility options while adhering to a phalanx of NCAA and Ivy regulations. “Every situation is unique, especially in the Ivy League, where academics are the priority,” says senior associate athletics director Tiffani-Dawn Sykes. “We cannot have one meeting that fits all, like other schools. This makes it most challenging to find pathways to eligibility.”

Three coaches hired this year will be unable to lead their teams into competition. Morgan Illikainen ’15 (women’s hockey), Reid Cashman (men’s hockey), and Porscha Dobson (indoor track and field) will have to play the waiting game, although they’ll still be able to lead practices and workouts as determined by the Ivy League and the College Covid-19 task force. Sheehy, who took heat for eliminating five varsity sports last March—the day after the Ivy League canceled all fall sports—says there are no plans to cut additional teams.