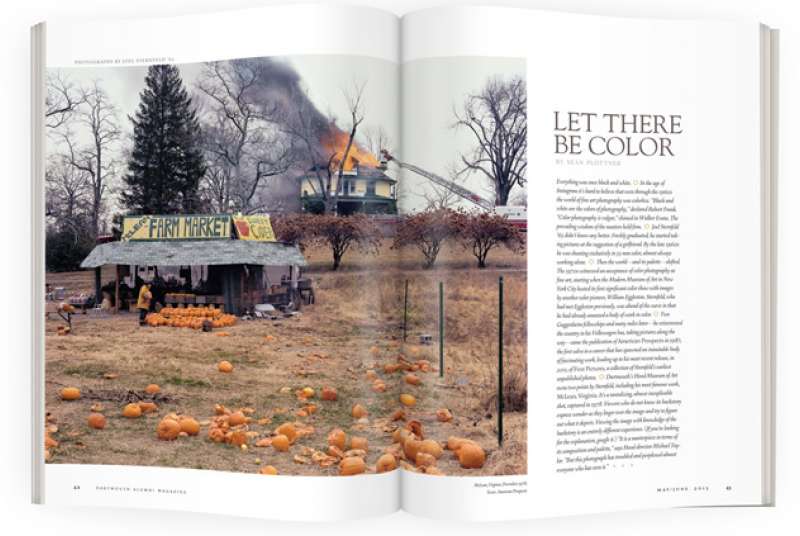 Let There Be Color

Through the 1960s, the world of fine art scoffed at the notion of color photography. Good thing Joel Sternfeld ’65 didn’t know any better.
Sean Plottner | May - Jun 2013

Everything was once black and white.

In the age of Instagram it’s hard to believe that even through the 1960s the world of fine art photography was colorless. “Black and white are the colors of photography,” declared Robert Frank. “Color photography is vulgar,” chimed in Walker Evans. The prevailing wisdom of the masters held firm.

Joel Sternfeld ’65 didn’t know any better. Freshly graduated, he started taking pictures at the suggestion of a girlfriend. By the late 1960s he was shooting exclusively in 35 mm color, almost always working alone.

Then the world—and its palette—shifted. The 1970s witnessed an acceptance of color photography as fine art, starting when the Modern Museum of Art in New York City hosted its first significant color show with images by another color pioneer, William Eggleston. Sternfeld, who had met Eggleston previously, was ahead of the curve in that he had already amassed a body of work in color.

Two Guggenheim fellowships and many miles later—he crisscrossed the country in his Volkswagen bus, taking pictures along the way—came the publication of American Prospects in 1987, the first salvo in a career that has spawned an inimitable body of fascinating work, leading up to his most recent release, in 2011, of First Pictures, a collection of Sternfeld’s earliest unpublished photos.

Dartmouth’s Hood Museum of Art owns two prints by Sternfeld, including his most famous work, McLean, Virginia. It’s a tantalizing, almost inexplicable shot, captured in 1978. Viewers who do not know its backstory express wonder as they linger over the image and try to figure out what it depicts. Viewing the image with knowledge of the backstory is an entirely different experience. (If you’re looking for the explanation, google it.) “It is a masterpiece in terms of its composition and palette,” says Hood director Michael Taylor. “But this photograph has troubled and perplexed almost everyone who has seen it.”

Like many students, Sternfeld came to Dartmouth in part due to its northern location and what he calls “a deep, abiding interest in the natural.” His senior year he completed the

Ledyard Canoe Club’s annual Trip to the Sea. Today he’s concerned about the environment and climate change. When proponents of saving the High Line in New York City contacted Sternfeld to ask him to photograph the unused railway line, he obliged by spending more than a year roaming the tracks with his camera. When word came that Mayor Rudolph Guliani was contemplating a dismantling of the railway in favor of development, a book of Sternfeld’s imagery was rushed into print. “That gave credibility to the project, something a box of prints couldn’t achieve,” he says. The tide turned. Joined by A-list celebrities who took up the cause, the Friends of the High Line saved the elevated railway and turned it into a lush park, with sections opening in 2009 and 2011. A third section is expected to open eventually. “It’s become a global symbol. In a world of no good stories, here is a good story,” says Sternfeld. “It was a project I was meant to do.”

The photographer, who lives in New York City and teaches at Sarah Lawrence College, is coming to Hanover as a Montgomery Fellow this summer. He’ll be teaching and delving into the outdoors he loves so much before he participates in the Carnegie International in Pittsburgh, Pennsylvania, this fall.