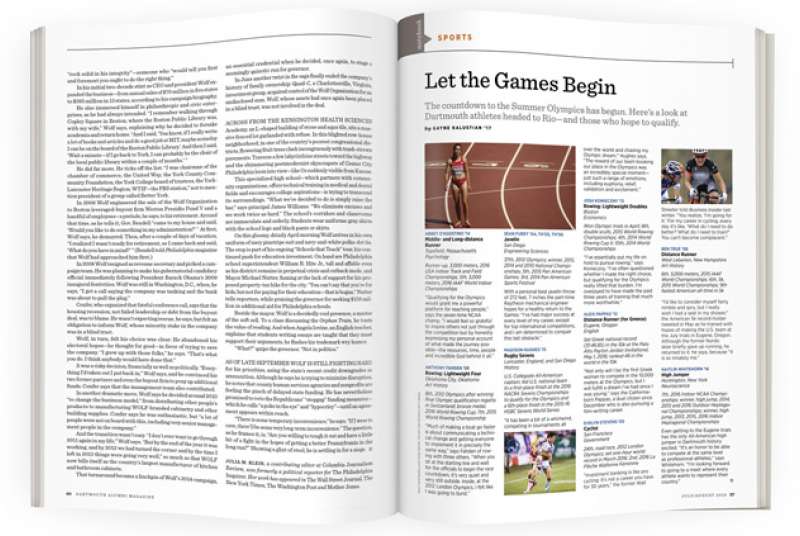 The countdown to the Summer Olympics has begun. Here’s a look at Dartmouth athletes headed to Rio—and those who hope to qualify.
Gayne Kalustian ’17 | Jul - Aug 2016

“Qualifying for the Olympics would grant me a powerful platform for reaching people,” says the seven-time NCAA champ. “I would feel so grateful to inspire others not just through the competition but by honestly expressing my personal account of what made the journey possible—the resources, time, people and incredible God behind it all.”

“Much of making a boat go faster is about communicating a technical change and getting everyone to implement it in precisely the same way,” says Fahden of rowing with three others. “When you sit at the starting line and wait for the officials to begin the race countdown, it’s very quiet and very still outside. Inside, at the 2012 London Olympics, I felt like I was going to burst.”

With a personal best javelin throw of 272 feet, 7 inches the part-time Raytheon mechanical engineer hopes for a healthy return to the Games: “I’ve had major success at every level of my career, except for top international competitions, and I am determined to conquer this last obstacle.”

U.S. Collegiate All-American captain; led U.S. national team to a first-place finish at the 2016 NACRA Sevens Championships to qualify for the Olympics and a 6th-place finish in the 2015-16 HSBC Sevens World Series

“It has been a bit of a whirlwind, competing in tournaments all over the world and chasing my Olympic dream,” Hughes says. “The reward of our team booking our place in the Olympics was an incredibly special moment—just such a range of emotions, including euphoria, relief, validation and excitement.”

“I’ve essentially put my life on hold to pursue rowing,” says Konieczny. “I’ve often questioned whether I made the right choice, but qualifying for the Olympics really lifted that burden. I’m overjoyed to have made the past three years of training that much more worthwhile.”

“Not only will I be the first Greek woman to compete in the 10,000 meters at the Olympics, but I will fulfill a dream I’ve had since I was young,” says the California-born Pappas, a dual citizen since December who is also pursuing a film-writing career.

“Investment banking is like pro cycling: It’s not a career you have for 30 years,” the former Wall Streeter told Business Insider last winter. “You realize, ‘I’m going for it.’ For my career in cycling, every day it’s like, ‘What do I need to do better? What do I need to train?’ You can’t become complacent.”

“I’d like to consider myself fairly nimble and spry, but I really wish I had a seat in my shower,” the American 5k record-holder tweeted in May as he trained with hopes of making the U.S. team at the July trials in Eugene, Oregon. Although the former Nordic skier briefly gave up running, he returned to it, he says, because “it is so innately me.”

Even getting to the Eugene trials has the only All-American high jumper in Dartmouth history excited. “It’s an honor to be able to compete at the same level as professional athletes,” says Whitehorn. “I’m looking forward to going to a meet where every athlete wants to represent their country.”