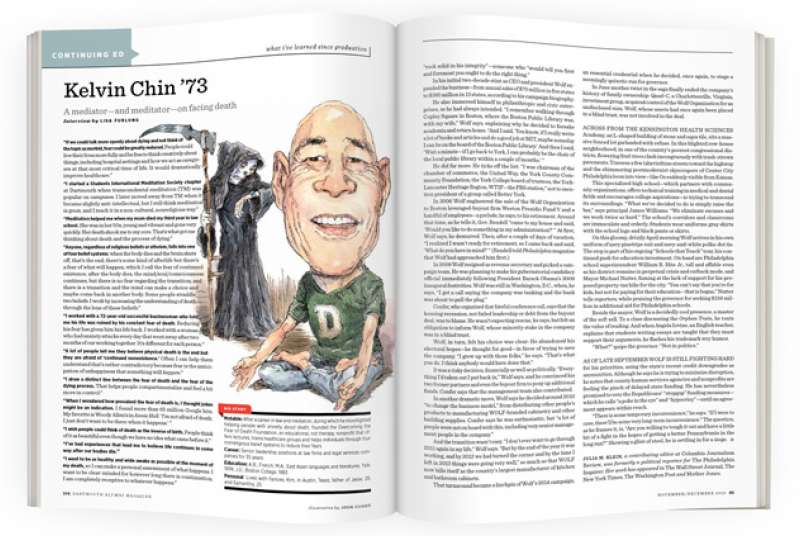 Notable: After a career in law and mediation, during which he moonlighted helping people with anxiety about death, founded the Overcoming the Fear of Death Foundation, an educational, not therapy, nonprofit that offers lectures, trains healthcare groups and helps individuals through four nonreligious belief systems to reduce their fears

Personal: Lives with fiancee, Kim, in Austin, Texas; father of Jesse, 28, and Samantha, 25

“If we could talk more openly about dying and not think of the topic as morbid, fear could be greatly reduced. People could live their lives more fully and be free to think creatively about things, including hospital settings and how we act as caregivers at that most critical time of life. It would dramatically improve healthcare.”

“I started a Students International Meditation Society chapter at Dartmouth when transcendental meditation (TM) was popular on campuses. I later moved away from TM when it became slightly anti-intellectual, but I still think meditation is great, and I teach it in a non-cultural, nonreligious way.”

“Meditation helped me when my mom died my third year in law school. She was in her 50s, young and vibrant and gone very quickly. Her death shook me to my core. That’s what got me thinking about death and the process of dying.”

“Anyone, regardless of religious beliefs or atheism, falls into one of four belief systems: when the body dies and the brain shuts off, that’s the end; there’s some kind of afterlife but there’s a fear of what will happen, which I call the fear of continued existence; after the body dies, the mind/soul/consciousness continues, but there is no fear regarding the transition; and there is a transition and the mind can make a choice and maybe come back in another body. Some people straddle two beliefs. I work by increasing the understanding of death through the lens of these beliefs.”

“I worked with a 72-year-old successful businessman who told me his life was ruined by his constant fear of death. Reducing his fear has given him his life back. I worked with a woman who had anxiety attacks every day that went away after two months of our working together. It’s different for each person.”

“A lot of people tell me they believe physical death is the end but they are afraid of ‘continued nonexistence.’ Often I can help them understand that’s rather contradictory because fear is the anticipation of unhappiness that something will happen.”

“I draw a distinct line between the fear of death and the fear of the dying process. That helps people compartmentalize and feel a bit more in control.”

“When I wondered how prevalent the fear of death is, I thought jokes might be an indication. I found more than 65 million Google hits. My favorite is Woody Allen’s in Annie Hall: ‘I’m not afraid of death. I just don’t want to be there when it happens.’ ”

“I wish people could think of death as the inverse of birth. People think of it as beautiful even though we have no idea what came before it.”

“I’ve had experiences that lead me to believe life continues in some way after our bodies die.”

“I want to be as healthy and wide awake as possible at the moment of my death, so I can make a personal assessment of what happens. I want to be clear-minded for however long there is continuation. I am completely receptive to whatever happens.”