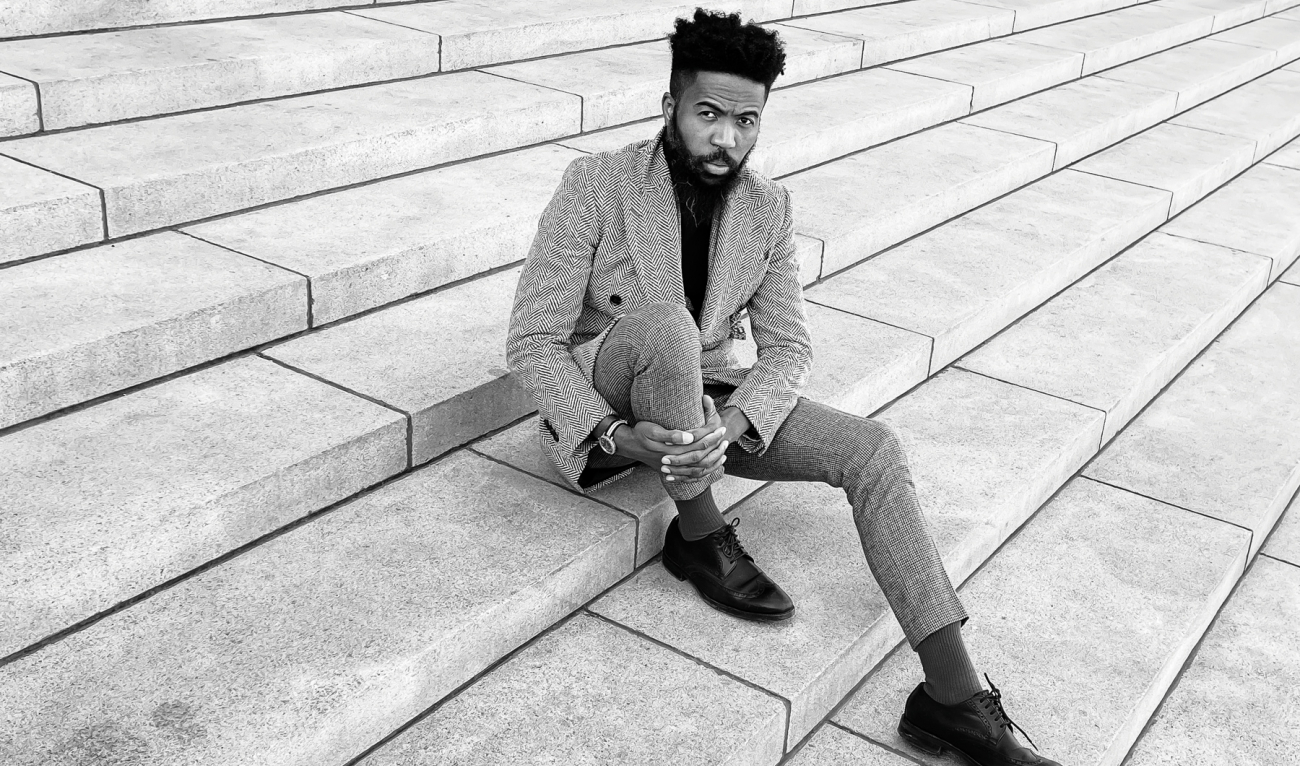 In the space of less than a week last April, Joshua Bennett won both a Guggenheim fellowship and a Whiting Award. “His poetry is piercingly intelligent—there is so much yearning and emotion alongside a mesmerizing musical craft,” according to the Whiting judges.

Bennett, 33, an English and creative writing professor, marvels at all that he has experienced in the past 18 months. In addition to winning the two awards, he’s had two books published, gained tenure, and become a full professor. He and his wife, Pam, bought their first home, and last fall their son, August Galileo, was born. “It’s been that kind of year,” he says. “My life has completely changed.”

Paul Slovak, vice president and executive editor at Viking who has handled the Penguin Poets imprint for two decades, edited Bennett’s first book, The Sobbing School, one of five winners of the 2015 National Poetry Series. “I’m amazed at how much he’s accomplished. His poetry is very accessible, with rhythm and humor, and so anchored in his personal experience. It speaks to people very smoothly and beautifully,” says Slovak, who also edited Bennett’s second book of poetry, Owed.

Dedicated to “the unheralded” and centered around Bennett’s experiences growing up in Yonkers, New York, Owed is a joyful, tender, but often sobering series of elegies and odes to touchstones, from his barber to long johns (“like skin for my skin”) to the plastic cover on his grandmother’s couch. Other poems give unflinching but eloquent voice to the harsh realities of poverty, the school-to-prison pipeline, police violence.

[Read an excerpt from Owed here.]

Owed ends with a moving poem about Bennett’s father, a postal worker and former Marine pictured on the cover holding Bennett as a baby. Once when the family was locked out of their house, his father scaled the building, broke through an upstairs bathroom window, then casually opened the front door. “He was Superman,” says Bennett. “If he saw someone getting beat up in the street, he’d jump out of the car and break up the fight. That’s why I became a poet. I had to do something different. I had to switch it up.”

A line, an idea, or an image usually helps Bennett start a poem. Lately he’s been using paint color cards—those strips of color samples you find in hardware stores—as writing prompts, playing with evocative paint color names such as Ginger Jar, Ever Blooming, Venom, Monologue, and Moxie. His collections typically take shape once he can find “the obsession or center point,” as he calls it. His third book of poetry, The Study of Human Life, which Penguin is releasing next year, starts with the idea of trash and disposability—of objects, people, even poems. “It’s much more experimental than anything I’ve done before,” he says, “and much more ambitious.”

Bennett roots his poetry in the cadences and dramatic delivery of spoken word performances. As a freshman at the University of Pennsylvania, he joined the Excelano Project, a spoken word collective, and began competing in poetry slams around the country. The following year, in May 2009, he performed at the White House, speaking—and signing—his impassioned poem about his deaf sister, Tamara. He had an agent and toured regularly, sometimes up to 40 gigs a year. “It was a weird way to do college,” he says, “but I wouldn’t have done it any other way.”

Bennett earned a master’s in theater performance at the University of Warwick in England, followed by a master’s and doctorate from Princeton and three years with the Harvard Society of Fellows. He started working at the College in January 2019. During the pandemic Bennett taught classes via Zoom, including Modern Black American Literature—a department staple to which he gave his own spin, “Education, Abolition, Exodus!”—and codirected the seniors honors seminar. “My students are the best,” he says. “They’re intellectually curious. Thoughtful. There really is a moral center to most of the questions they ask. They come to literature to learn how to be more decent people.”

In addition to a fourth book of poetry for Penguin and a second book of literary criticism (a sequel to his 2020 Being Property Once Myself: Blackness and the End of Man), Bennett is completing Spoken Word: A Cultural History for Knopf. He describes it as a 50-year narrative nonfiction about mostly Black and Latino spoken word poets.

Spoken word performances can be fiercely competitive. “Some poets can be super loud, apocalyptic,” Bennett says. “Then there are poets who are quite quiet, barely above a whisper. Those are the poems that can crack a slam open, those are the people on any given night who will take the win, who completely shift the tone of the night.”

Bennett first performed in a slam at 13—and won. He was terrified, but his mother insisted that he get on stage at the public library. “She reminded me that I have gifts that are meant to be shared. Yeah, that’s my mom: You’ve got a gift, you share it.”

Earlier, at age 4, Bennett had already started to hone his performance chops. At home on Sundays after services at the Messiah Baptist Church, his family listened to him improvise recaps of the sermons. “He was the little preacher,” says his sister, LaToya, who is eight years older. “Even then he had real stage presence.”

Bennett most recently performed at an open-air show during Juneteenth this year at Longwood Gardens near Philadelphia. Though it was not the kind of intimate, indoor venue where he is in his element, he says, “It felt electric and good.”

“He’s a trailblazer and a big inspiration,” says Sam Van Cook, a former National Poetry Slam champion. “He’s got confident charm. He knows how to get a hold of people’s heartstrings. He takes you somewhere you’ve never been before.”