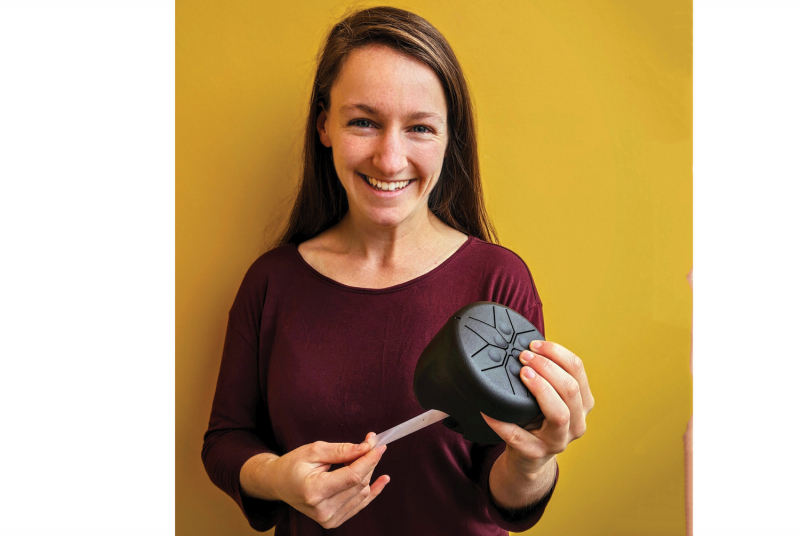 When Johnson’s new advisor asked her if she wanted to work on creating an affordable, flexible, handheld label maker for the blind, she jumped at the chance. Johnson, then a design fellow at Thayer, was about to join the lab of Alex Slocum, a mechanical engineering professor at MIT. He shared an idea that had been pitched to him: “a Braille label maker with Scotch tape as an embossing mechanism.” The idea had come to Slocum through the MIT Tata Center, an Indian-based foundation that funds research projects at MIT that focus on work in India.

Braille-It will be significantly more flexible and affordable than other Braille label makers on the market. It will work with any of the 130 Braille languages (most similar products can produce only one language) and can be made for about $5. Johnson estimates her final product will sell for about $15, compared with the current $40 cost for English-only devices. And Scotch tape, she says, has both good distribution around the globe and “very particular elastic properties that let it deform and hold the dot” for Braille writing. She hopes Braille-It will help with home and work activities and be a teaching tool for children.

A native of Portland, Oregon, Johnson attended high school at United World College in Mostar, Bosnia and Herzegovina, so she didn’t study abroad while at Dartmouth—though she did visit India four times while developing Braille-It. She graduated from Dartmouth and Thayer with an A.B. and a B.E., finishing both degrees in just four years. “It was intense,” she says.

Now working on her Ph.D. in mechanical engineering at MIT, Johnson is fine-tuning her device. In June she filed a patent, and she received startup funding from MIT to bring her invention to life. That means “another round of prototype testing,” she says, “and then I’ll design for manufacturing.”