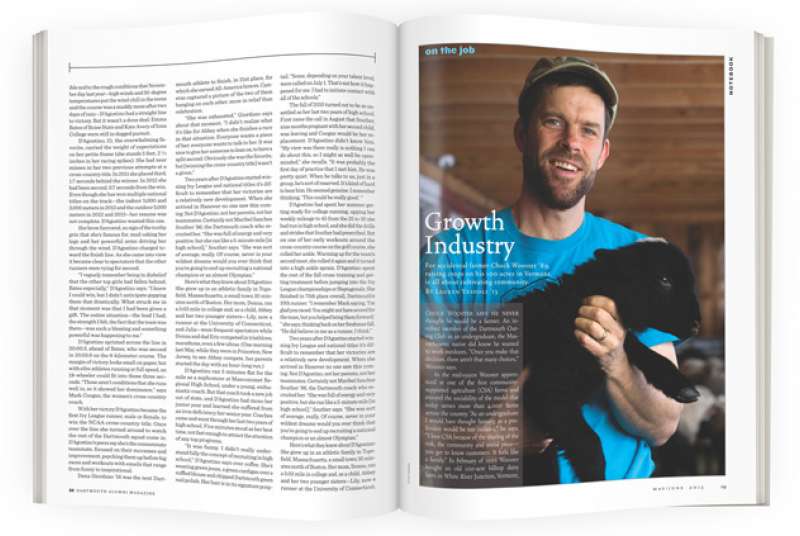 Chuck Wooster says he never thought he would be a farmer. An involved member of the Dartmouth Outing Club as an undergraduate, the Massachusetts native did know he wanted to work outdoors. “Once you make that decision, there aren’t that many choices,” Wooster says.

In the mid-1990s Wooster apprenticed at one of the first community-supported agriculture (CSA) farms and enjoyed the sociability of the model that today serves more than 4,000 farms across the country. “As an undergraduate I would have thought farming as a profession would be too isolated,” he says. “I love CSA because of the sharing of the risk, the community and social piece—you get to know customers. It feels like a family.” In February of 1999 Wooster bought an old 100-acre hilltop dairy farm in White River Junction, Vermont, which became Sunrise Organic Farm LLC in 2000.

In its first year of operation Sunrise sold shares to seven families. During the past 13 years word has spread throughout the Upper Valley, and today 120 members hold shares. When people join the Sunrise CSA, or buy a year’s share, they have access to 23 weeks of farm-grown vegetables from mid-May to mid-October. For a 2012 share at $550, he says, members received $775 to $800 worth of vegetables at retail price, saving about 30 percent.

“They buy into the risk,” Wooster says. “Our goal is to get vegetables to people at 30 percent off what they’d pay for full-price organic in a grocery store.” The farm has succeeded. “In 12 years we’ve been able to sell to people at 30 percent off or more 10 times. We’ve fallen short twice.” Once a July hailstorm raised prices to 18 percent off retail price, but the shareholders remained faithful. “I was delighted that people understood the CSA concept and had confidence in the farm bouncing back,” Wooster says.

The total retail value of all the produce Sunrise sells each season is about $10,000. There’s spinach and asparagus in the spring, tomatoes and corn in the summer, and sweet potatoes and kale in the fall, to name just some of the produce. “It’s like having a glorified gardener,” Wooster says. Each year the farm also raises 800 chickens, five pigs and three dozen sheep, whose meat is sold à la carte along with Sunrise’s own maple syrup and goods such as beef and cheese from other local farms. Feeding his extended “family,” as he calls it, makes spring the busiest time of the year, as members begin to collect their shares. In the main vegetable season Wooster usually clocks a 7 a.m.-to-5 p.m. workday and brings in help as needed. “Sometimes we start earlier if it’s hot,” he says.

Activity on the farm slowly settles down during the winter when Wooster, the only year-round employee, does freelance writing for Northern Woodlands magazine, serves as a board member for several local nonprofits and keeps the books for the farm.

Ideology plays a large role in how Wooster manages the farm. In 2007 he decided to let its official organic certification lapse, though the farm’s produce was still technically organic. He felt that the USDA’s nationalization of organic standards in 2002 challenged the integrity of organic farming. Despite the increase in sales of organic produce and the streamlining of regulations, the “locally focused, soil-based, low-input ethos that first defined organic agriculture in this country, especially here in New England, has faded away to be replaced by enormous farms that often consume more fossil fuel than their conventional cousins,” Wooster wrote on the Sunrise Farm website in 2007. Wooster used to be a vegetarian because of his disgust with the industrial food system’s poor treatment of animals. That changed as he learned more about farming. “I discovered that vegetarianism was a made-up concept—an invention of people in urban settings who buy food in supermarkets,” he says. “Down on the farm there is no defensible distinction between plants and animals.” Sunrise operates under this principle, and Wooster concerns himself with ensuring the best possible lives (and deaths) for his pigs, chickens and sheep.

For shareholders, who compose “a cross-section of the Upper Valley,” according to Wooster, Sunrise is more than just a place to pick up vegetables. “People pick their own herbs and flowers. A lot come to walk around the field and take a break during their day,” he says. Many shareholders are tied to Dartmouth: alums, administrators and faculty come to the farm weekly to pick up their vegetable shares. The Big Green is also represented within the farm’s management. Wooster’s wife is Sue Kirincich ’92 and his former business partner is Norah Lake ’06, who left Sunrise last year to start her own CSA farm in Norwich, Vermont.

Sunrise, successful in its own right, has also benefitted from the friendly climate for small farms that has existed in recent years. Wooster attributes this favor for local farms to increased awareness about the origins of food and their effects on people’s health, and the development of tools such as unheated greenhouses that allow small farms to extend their growing seasons. “People discover that local food is not more expensive or is not that much more expensive,” Wooster says. “All of these factors are coming together to make it a great time for local agriculture.”

Wooster recognizes the irony of his profession compared to his Dartmouth studies in earth sciences. “In geology you’re always getting rid of the ‘overburden,’ ” or the soil that lies above an area of geologic interest, he says. “Now I work solely in the overburden.”

Lauren Vespoli is a DAM intern from Guilford, Connecticut. She is majoring in history and minoring in English.