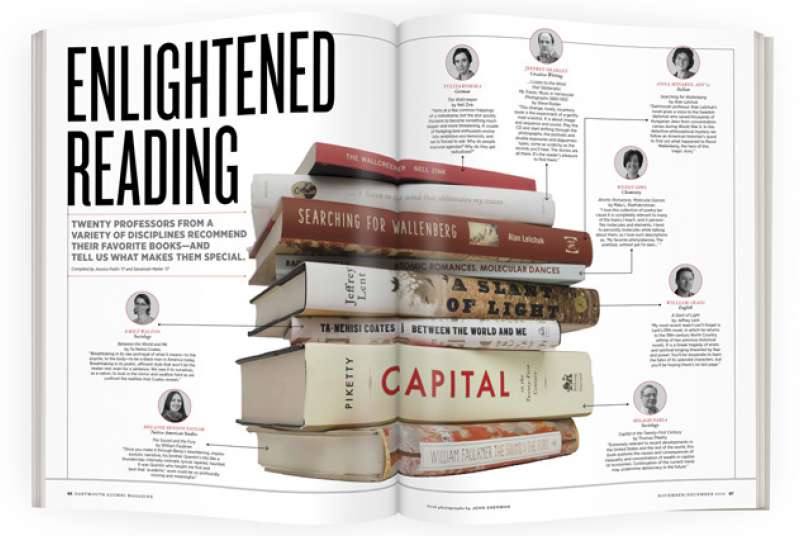 Twenty professors from a variety of disciplines recommend their favorite books and tell us what makes them special.
Compiled by Jessica Fedin ’17 and Savannah Maher ’17 | Nov - Dec 2015

Emily Walton, Sociology
Between the World and Me by Ta-Nehisi Coates

“Breathtaking in its raw portrayal of what it means—to the psyche, to the body—to be a black man in America today. Breathtaking in its poetic, efficient style that won’t let the reader rest, even for a sentence. We owe it to ourselves, as a nation, to look in the mirror and swallow hard as we confront the realities that Coates reveals.”

“Once you make it through Benjy’s bewildering, impressionistic narrative, his brother Quentin’s hits like a thunderclap: intensely intimate, lyrical, layered, haunted. It was Quentin who taught me first and best that ‘academic’ work could be so profoundly moving and meaningful.”

“Hints at a few common trappings of a melodrama, but the plot quickly thickens to become something much bigger and more threatening. A couple of fledgling bird enthusiasts evolve into ambitious eco-terrorists, and we’re forced to ask: Why do people espouse agendas? Why do they get radicalized?”

Jeffrey Sharlet, Creative Writing
...I Listen to the Wind that Obliterates My Traces: Music in Vernacular Photographs 1880-1955 by Steve Roden

“This strange, lovely, incantory book is the experiment of a gently mad scientist. It is about image and sequence and sound. Play the CD and start drifting through the photographs, the portraits and double exposures and daguerreotypes, some as scratchy as the records you’ll hear. The stories are all there. It’s the reader’s pleasure to find them.”

“I love this collection of poetry because it is completely relevant to many of the topics I teach, and it personifies molecules and elements. I tend to personify molecules while talking about them, so I love such descriptions as, ‘My favorite phenylalanine, The prettiest, wittiest gal I’d seen…’ ”

“Dartmouth professor Alan Lelchuk’s novel gives a voice to the Swedish diplomat who saved thousands of Hungarian Jews from concentration camps during World War II. In this detective-philosophical mystery we follow an American historian’s quest to find out what happened to Raoul Wallenberg, the hero of this tragic story.”

William Craig, English
A Slant of Light by Jeffrey Lent

“Extremely relevant to recent developments in the United States and the rest of the world, this book explores the causes and consequences of inequality and concentration of wealth in capitalist economies. Continuation of the current trend may undermine democracy in the future.”

“David Brower, the ‘archdruid’ who put the Sierra Club on the map in the 1950s and 1960s, interacts with three opponents who arguably also care about the environment, but in different ways or with different priorities than his, in McPhee’s relatively neutral classic.”

“As a literature professor thinking of creating a website featuring the worst sentences ever written by prize-winning authors, I was completely smitten. Its minute detail, plain language, sharp images and deep insight are simply overwhelming.”

Julie Püttgen, Studio Art
How to Be a Woman by Caitlin Moran

“As someone who has traveled widely since childhood trips from the United States to France and Switzerland, I find many of the books that mean the most to me are journey-based. I have also been avidly appreciating memoirs as fellow-travelers’ notes from the road. Moran’s hilarious narrative is close to my heart right now.”

“A moving, funny, sprawling story that traces three generations in the life of a Greek immigrant family in Detroit, narrated by a highly literary intersex writer. It is a timely meditation on the fluidity of genes, sex, race and religion, as well as a satisfying tale of one family’s love and pathologies.”

“One of the most unforgettable books I’ve ever read, it’s technically a work of photojournalism, covering the lives of sharecropper families in the Depression-era U.S. South. But when I read it as a graduate student, Agee’s prose floored me—for days.”

“This is not my favorite book, but it was especially influential. I read it when I was 11 or so. It offered a vision that stood in stark contrast to the glorious portrayal of combat in the movies and TV and contributed to my evolving viewpoints about patriotism, war, the meaning of ‘national interest’ and human nature. I particularly recall the hellish suffering of the wounded depicted in the novel.”

Melinda O’Neal, Music
Music in 1853: The Biography of a Year by Hugh Macdonald

“Most historians discuss influences, legacies and the evolution of musical styles. Macdonald instead offers a focused lens on the lives of Brahms, Schumann, Berlioz and Wagner and their interactions with each other in one slice of time. Our connection to their music is vastly enhanced.”

Dean Wilcox, Chemistry
If on a Winter’s Night a Traveler by Italo Calvino

“An incredibly crafted book of interconnected chapters, each of which begins a new story in a different setting—which leaves the reader hungry for the rest of each story. If I were ever to teach a course on creative writing, I’d use this book as a template.”

James Brown, Film
A Hilltop on the Marne by Mildred Aldrich

“Written by a 61-year-old Bostonian journalist ex-pat living in France, it details, through a series of letters, the author moving from Paris to the countryside near Huiry on the Marne River in the spring of 1914, not in the least expecting a World War. I’ve never read anything quite like it.”

“The theoretical principles and research methods in this book form the foundation of modern sociolinguistics. It’s the most influential book on my shelves. I use Labov’s ideas every day in my own research on dialects of indigenous minority languages.”

“A lovely and very sad story narrated by the youngest of three brothers being raised by their parents—Paps, who is Puerto Rican, and Ma, who is white. Beautifully written, with a keen eye for detail that makes real the pain and love, the narrative conveys the hardships of growing up poor and in a difficult family.”

Charles Wheelan ’88, Public Policy
Secrets: A Memoir of Vietnam and the Pentagon Papers by Daniel Ellsberg

“It’s relevant, given the current debates over government policy, national security, leaks and the question of when, if ever, leaking confidential information can be justified. Those below a certain age may also be amused by the logistical complexity of sneaking out 7,000 pages of documents and photocopying them all.”