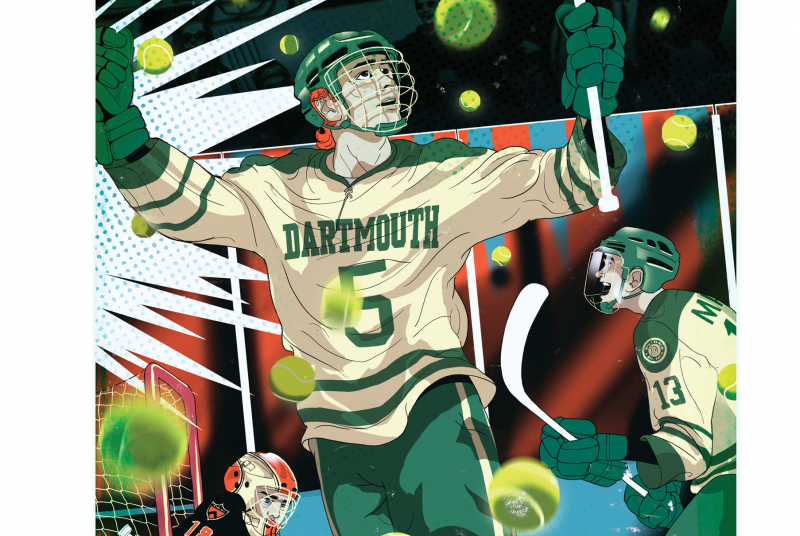 Only at Dartmouth can you find tennis mixed with hockey. Here’s how a fanatic tradition began.
Betsy Vereckey | January-February 2021

Former men’s ice hockey coach Roger Demment remembers the game well: The Big Green were playing at Princeton, and the Tigers had just scored on goalkeeper Vern Guetens ’93. As if that weren’t bad enough, a few Princeton fans in the stands decided to get a little rowdy.

“A couple of balls were thrown on the ice,” recalls Demment. “I can’t remember if they were tennis balls or lacrosse balls or whatever they were, but things were tossed on the ice to celebrate their first goal.”

A Dartmouth student who was working as a radio announcer witnessed the transgression and decided to orchestrate a payback when Princeton came to Hanover later in the 1992-93 season, according to Demment. When Dartmouth scored its first goal at home in Thompson Arena, a few Big Green fans threw tennis balls onto the skating surface.

A new tradition was born.

By the end of Demment’s six-year tenure in 1997, the tennis ball prank had caught fire—year after year more students filled the student section of Thompson Arena for the Princeton game. “I think every student wanted to be a part of it,” Demment says. “The entire student section would be jam-packed and there would be standing-room only in the arena, which was great for our players because it generated a lot of energy.” To this day, when the Tigers come to Hanover, students toss tennis balls onto the ice the first time Dartmouth scores. For 28 years and counting the game has been highly anticipated by students, who stuff as many tennis balls as possible into their clothes to sneak into the stands.

“You could always tell the game was coming up because the local CVS store would have a front-and-center display of tennis balls,” says Pat Salvas, associate director of varsity athletics communications.

More students, however, means more balls to clean up, and stopping play makes it harder for the Big Green to piggyback off that first goal and score more, says Bob Gaudet ’81, men’s hockey head coach from 1997 to 2020. “It’s bittersweet because we love the energy—the fans are great—but you don’t want to take away from the momentum of your team. One of your goals as a team is to score consecutive goals, so what happens is when you score, maybe it puts us up 1-0 in the game—you want to come back and seize that momentum. Instead, you have a delay.”

It can take as long as five minutes to clear away the balls—everyone chips in, from the grounds crew to the players themselves, but for the coaches the pause can be frustrating. “The idea was to score the goal early and get it over with so that we could play the game,” Demment says. That sentiment is echoed by Grant Opperman ’17, who was a freshman when he scored “the Goal,” as it’s called. He remembers feeling a “weird amount of urgency” to get a goal early. “Obviously, no one in the locker room at the time is going to admit that it’s unlike any other game,” Opperman says. “But I think everyone deep down is kind of thinking, ‘Shoot a little bit more during that first period than any other period of the season.’ ”

And shoot they do—Gaudet estimates that 90 percent of the time the first Dartmouth goal comes during the first period. And it’s not just upperclassmen who shoot the puck. For five straight years the Goal was scored by a freshman, which Opperman says helps newbies earn some serious “street cred” with the team. Will Graber ’20, the most recent player to score the Goal, describes the experience as “pretty cool” and “something I’ll never forget.”

Although students and players love the tradition, it’s been known to ruffle some feathers within the administration. Some want it abolished, fearing that spectators will throw items onto the ice and injure players. Before the tradition settled in, fans would throw other objects onto the ice—such as oranges and soda cans—and they would do so after every goal during the game. “So it wasn’t just one delay, it was often several,” says Demment. “And then there were times when the referees threatened to call a delay-of-game penalty against us.”

Through the years Eastern College Athletic Conference officials and the two teams have reached a compromise: Dartmouth isn’t penalized the first time tennis balls are tossed. But anything after that garners a two-minute delay-of-game penalty, which happened once or twice during Gaudet’s tenure.

Gaudet never encountered any pushback from Princeton coaches or parents. He recalls one group of Tigers fans he met while dining postgame at a restaurant in Hanover. “Oh, Coach, this is great,” they told him. “We love it because our kids get to play in front of a huge crowd.”

Dartmouth and Princeton have long been friendly rivals, with storied teams that date more than a century. Dartmouth hockey was established in 1906, Princeton in 1899. “They’re a good opponent and a big opponent, and traditionally the really nice thing about Division I hockey, which includes the Ivy League, is that there’s so much tradition,” says Gaudet, who retired last April.

Although the pandemic makes it uncertain when the next hockey season may start, Gaudet thinks the tennis ball tradition can help give back to the community. He suggests that the College could sell tennis balls to fans at the game to benefit charity. “Some real positives could come out of it,” he says.

The tradition is likely to endure. Like it or not, the tennis ball mayhem serves as a unique—if unintentional—recruiting draw for the hockey program. Alex Jasiek ’19 says he chose to play for the Big Green after seeing videos of tennis balls flying at Thompson on YouTube.

“I just kept watching it over and over,” he says. “I was pretty much sold.”

Betsy Vereckey is a Vermont-based freelance writer and a frequent contributor to DAM.