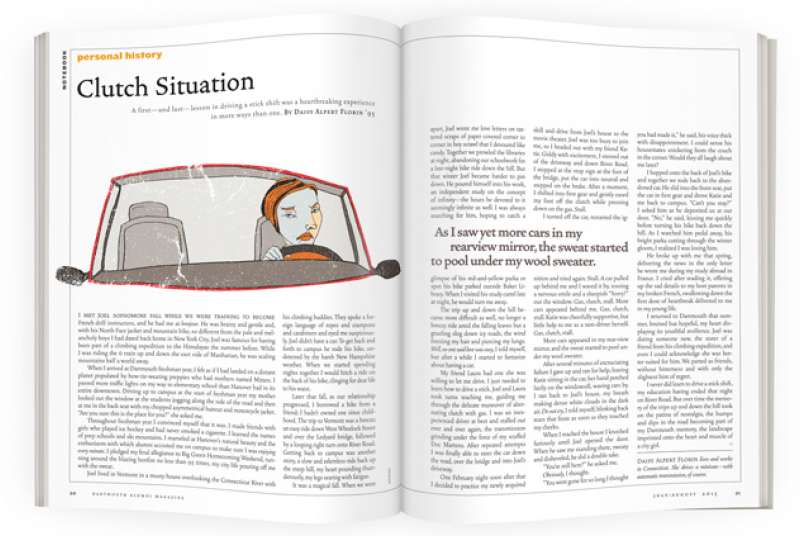 A first—and last—lesson in driving a stick shift was a heartbreaking experience in more ways than one.
Daisy Alpert Florin ’95 | Jul - Aug 2013

I met Joel sophomore fall while we were training to become French drill instructors, and he had me at bonjour. He was brainy and gentle and, with his North Face jacket and mountain bike, so different from the pale and melancholy boys I had dated back home in New York City. Joel was famous for having been part of a climbing expedition to the Himalayas the summer before. While I was riding the 6 train up and down the east side of Manhattan, he was scaling mountains half a world away.

When I arrived at Dartmouth freshman year, I felt as if I had landed on a distant planet populated by bow-tie-wearing preppies who had mothers named Mitten. I passed more traffic lights on my way to elementary school than Hanover had in its entire downtown. Driving up to campus at the start of freshman year my mother looked out the window at the students jogging along the side of the road and then at me in the back seat with my chopped asymmetrical haircut and motorcycle jacket. “Are you sure this is the place for you?” she asked me.

Throughout freshman year I convinced myself that it was. I made friends with girls who played ice hockey and had never smoked a cigarette. I learned the names of prep schools and ski mountains. I marveled at Hanover’s natural beauty and the enthusiasm with which alumni accosted me on campus to make sure I was enjoying every minute. I pledged my final allegiance to Big Green Homecoming Weekend, running around the blazing bonfire no less than 95 times, my city life pouring off me with the sweat.

Joel lived in Vermont in a musty house overlooking the Connecticut River with his climbing buddies. They spoke a foreign language of ropes and crampons and carabiners and eyed me suspiciously. Joel didn’t have a car: To get back and forth to campus he rode his bike, undeterred by the harsh New Hampshire weather. When we started spending nights together I would hitch a ride on the back of his bike, clinging for dear life to his waist.

Later that fall, as our relationship progressed, I borrowed a bike from a friend; I hadn’t owned one since childhood. The trip to Vermont was a breeze; an easy ride down West Wheelock Street and over the Ledyard bridge, followed by a looping right turn onto River Road. Getting back to campus was another story, a slow and relentless ride back up the steep hill, my heart pounding thunderously, my legs searing with fatigue.

It was a magical fall. When we were apart, Joel wrote me love letters on tattered scraps of paper covered corner to corner in boy scrawl that I devoured like candy. Together we prowled the libraries at night, abandoning our schoolwork for a late-night bike ride down the hill. But that winter Joel became harder to pin down. He poured himself into his work, an independent study on the concept of infinity—the hours he devoted to it seemingly infinite as well. I was always searching for him, hoping to catch a glimpse of his red-and-yellow parka or spot his bike parked outside Baker Library. When I visited his study carrel late at night, he would turn me away.

The trip up and down the hill became more difficult as well, no longer a breezy ride amid the falling leaves but a grueling slog down icy roads, the wind freezing my hair and piercing my lungs. Well, no one said love was easy, I told myself, but after a while I started to fantasize about having a car.

My friend Laura had one she was willing to let me drive. I just needed to learn how to drive a stick. Joel and Laura took turns teaching me, guiding me through the delicate maneuver of alternating clutch with gas. I was an inexperienced driver at best and stalled out over and over again, the transmission grinding under the force of my scuffed Doc Martens. After repeated attempts I was finally able to steer the car down the road, over the bridge and into Joel’s driveway.

One February night soon after that I decided to practice my newly acquired skill and drive from Joel’s house to the movie theater. Joel was too busy to join me, so I headed out with my friend Katie. Giddy with excitement, I steered out of the driveway and down River Road. I stopped at the stop sign at the foot of the bridge, put the car into neutral and stepped on the brake. After a moment, I shifted into first gear and gently eased my foot off the clutch while pressing down on the gas. Stall.

More cars appeared in my rear-view mirror, and the sweat started to pool under my wool sweater.

After several minutes of excruciating failure I gave up and ran for help, leaving Katie sitting in the car, her hand perched lazily on the windowsill, waving cars by.
I ran back to Joel’s house, my breath making dense white clouds in the dark air. Do not cry, I told myself, blinking back tears that froze as soon as they touched my cheeks.

When I reached the house I knocked furiously until Joel opened the door. When he saw me standing there, sweaty and disheveled, he did a double take.

“You were gone for so long I thought you had made it,” he said, his voice thick with disappointment. I could sense his housemates snickering from the couch in the corner. Would they all laugh about me later?

I hopped onto the back of Joel’s bike and together we rode back to the abandoned car. He slid into the front seat, put the car in first gear and drove Katie and me back to campus. “Can’t you stay?” I asked him as he deposited us at our door. “No,” he said, kissing me quickly before turning his bike back down the hill. As I watched him pedal away, his bright parka cutting through the winter gloom, I realized I was losing him.

He broke up with me that spring, delivering the news in the only letter he wrote me during my study abroad in France. I cried after reading it, offering up the sad details to my host parents in my broken French, swallowing down the first dose of heartbreak delivered to me in my young life.

I returned to Dartmouth that summer, bruised but hopeful, my heart displaying its youthful resilience. Joel was dating someone new, the sister of a friend from his climbing expedition, and even I could acknowledge she was better suited for him. We parted as friends, without bitterness and with only the slightest hint of regret.

I never did learn to drive a stick shift, my education having ended that night on River Road. But over time the memory of the trips up and down the hill took on the patina of nostalgia, the bumps and dips in the road becoming part of my Dartmouth memory, the landscape imprinted onto the heart and muscle of a city girl.

Daisy Alpert Florin lives and works in Connecticut. She drives a minivan—with automatic transmission, of course.