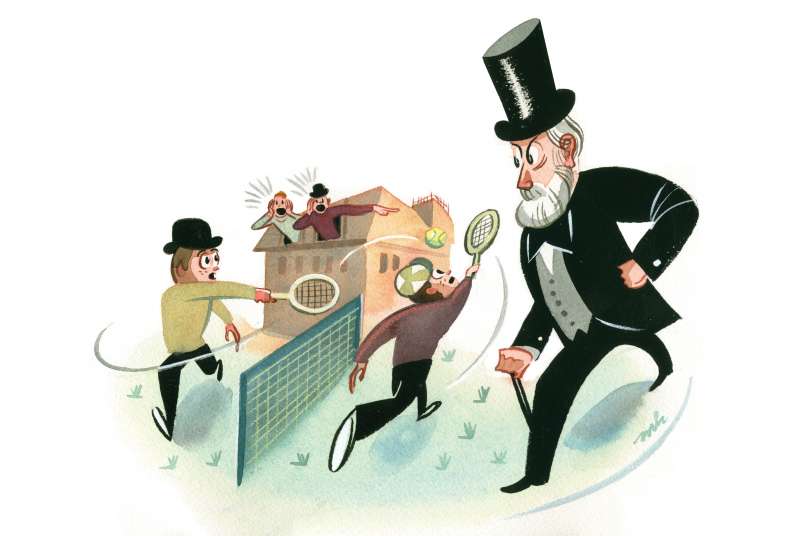 Long before Dean Wormer’s “double secret probation,” there was the one and only President Samuel Colcord Bartlett.
Walter A. Lane, class of 1895 | Jan - Feb 2019

1892—In those days there was a Faculty rule that sports should not be indulged in on the Campus during morning study hours; and while this was observed by the students so far as any large gatherings were concerned, it was the usual procedure for the boys, if they had no morning recitations or studying to do, to play tennis on the few “private courts” that they had laid out around the borders of the Campus, or to play catch, or knock up flys, or kick a football dependent on the seasonal sport.

“Deke Hall,” so called because the upper two floors of a large frame house, with the Davison general store on the ground floor, were occupied by the Delta Kappa Epsilon fraternity and such congenial spirits as Ed Hall, Sam Baldwin, Henry Ide, Pat Reed, Matt Jones, Phil Marden, Charley Merrill and others equally studious—near examination time—but not so concentrated on their books as to miss any possible diversion within the wide scope of vision afforded them from their windows.

It so happened that my chum and classmate Pillsbury and I had a free hour one bright spring morning of our Freshman year and thought we would enjoy a game of tennis on “our court” which we had labored long and arduously the previous day to mark out; and as we were playing, suddenly the windows of Deke Hall shot up and in chorus or singly, but always vociferously and complainingly the voices rang out, “Lane! Pillsbury! Stop playing tennis, you are disturbing our studies.”

Naturally we were amused at anything disturbing such studies as they might have and wondered what the joke was until we saw on the street the figure of the venerable Dr. Bartlett [class of 1836], then President of the College, about opposite the bank which was the next building to Deke Hall. They continued to shout and Prexie looked at us, looked up at the windows, noted the time and listened carefully to the names, bobbed a little more vigorously his head of which his silk hat seemed an integral portion, and a day or two later we each received the following letter written in long hand by the President:

Lawn Tennis on the Campus in study hours will incur faculty discipline.

From a letter published in the December 1922 issue of DAM