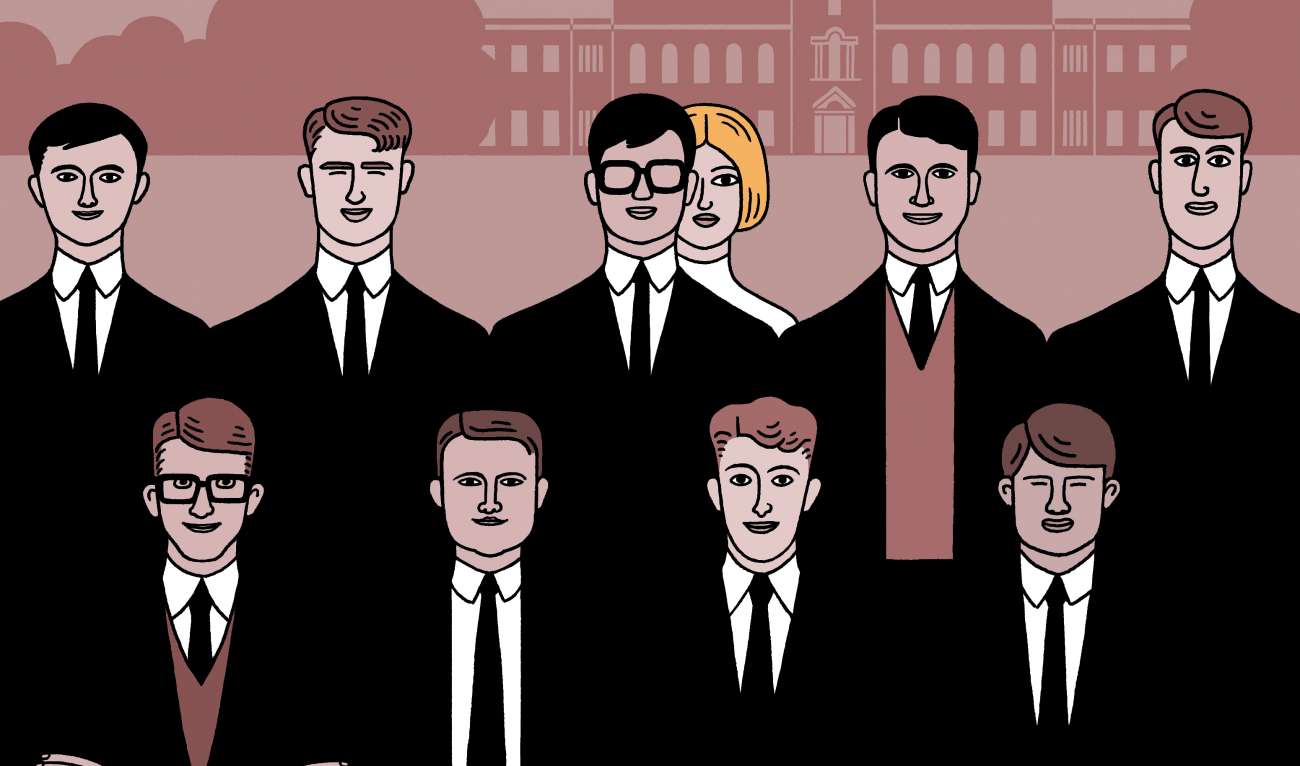 Back Where I Belong

The College’s pioneering women finally get their due.
Lynn Lobban ’69 | Nov-Dec 2019

The first reunion I wasn’t invited to took place decades ago. I may have been one of the first women Dartmouth brought in to begin the journey to coeducation, but I had long ago been forgotten. I just happened to be on campus during reunion weekend in 1999, when my son had his College interview.

“I’m Lynn Lobban,” I said cheerily to the young woman in admissions. “I was one of the first seven women at Dartmouth in 1968.” The College had taken me and a handful of female students into its theater department for one year. In a Big Green delusion, I was sure I was some kind of legacy.

It was as if I told them Mars had once been colonized. Oh, they knew all about Meryl Streep’s single semester in 1970 and her honorary doctorate—who doesn’t? But the trail I blazed was as smooth as the Sahara sands.

Embarrassed in front of my son, I would show him my fraternity. I joined Chi Phi Heorot soon after my arrival because I needed to be one of the boys. My son loved hearing my initiation story.

“If I come here, I’ll be in a fraternity for sure,” he said as we crossed the Green. My being in a fraternity was one thing, but the idea of him taking part in macho drinking contests and being told secrets I still may not know was not okay with me. I noted my hypocrisy.

As we walked into Heorot, the stench of stale beer knocked me back. A student came up from below, and I introduced myself as his brother. He looked confused. “Do you know where the 1969 composite photo is?” I asked, needing to prove my existence to my son with the old group portraits.

He pointed to the living room.

The photo of my silk-ruffled face was gone. The space where I had been deliberately placed—below the dog, whose picture remained—was a blank square. If the initiation coffin had been near, I would have crawled in and closed the lid. Whether I was excised one night by a drunken brother who was enraged his girlfriend dumped him or by some ancient alum upset a woman dared to invade his sacred Chi, I will probably never know.

When Arthur Fergenson ’69 called me in 2006 to say his class was “adopting” Dartmouth’s pioneering women, I was thrilled. Though the majority of men might not have known, could have cared less, or didn’t want women in their classes—The Dartmouth in 1969 ran an article headlined, “Women Begin Invading College”—I didn’t care. I could finally go to reunion.

What I loved about my 40th in 2009, besides finally staying in a dorm, sharing meals with Hopkins Center friends, and attending the memorial service (my favorite part of any reunion because it reminds me of the preciousness of life), was seeing Binky, Nanalee, Carol, Ginny, Geri, and Jane. I had been so male-centric at Dartmouth, wanting to be an equal while needing male attention, that I hadn’t appreciated my fellow pioneers.

“I was sure you had been arrested the night you were protesting against the war in Vietnam,” Jane said. “We never talked about your anti-war activities. I knew practically nothing about your fraternity experience. As for your mother, I remember you telling me you had to go home because she was dying. You must have compartmentalized your life and only shared the intimate details with Denis.”

No, Jane. It was easier to dump my Dartmouth boyfriend for the visiting art professor than be that vulnerable.

I had been so male-centric at Dartmouth, wanting to be an equal while needing male attention, that I hadn’t appreciated my fellow pioneers.

As wonderful as the 40th was, it was unnerving. After Sunday’s breakfast I couldn’t drive home fast enough.

A lot had changed in the run-up to the 50th earlier this year. When the save-the-date card came, I couldn’t wait for reunion. These events are not for everyone, and age brought badly timed challenges to more than a few. But for me, the 50th was like winning the Dartmouth lottery.

The weather was ridiculously perfect. I looked into a cloudless blue sky and felt young again. After lunch with the class of 2019, I headed to the Hop to watch a re-enactment of the 1969 Parkhurst takeover. I sat on a panel about 1960s activism and talked about spending 12 hours in Parkhurst and being afraid of going to jail. I listened to an ROTC alum, whose presence I had once protested, talk about how he had felt. We were all just struggling human beings.

At Heorot, I watched brothers younger than my children play on the lawn where I once endured an involuntary acid trip because someone laced the punch. As I exited the messy house they assured me, like kids reporting to their mother, that Heorot would be “renovated.”

It was easier to connect with brothers I remain close to: Jim Nachtwey ’70, John Myers ’69, Bill Kneisel ’69, and Frank Reynolds ’69. As I once again received their loving kindness, I realized I hadn’t simply wanted to be their equal 50 years ago. Back then I was also desperate for big brother protection on a Dartmouth campus of 3,000 men.

I joined alums, female pioneers, spouses, and partners and sang the alma mater. Though it had taken Dartmouth 16 years after women had been formally matriculated to change the lyric, “Men of Dartmouth,” to “Dear Old Dartmouth,” I cried anyway. Granite was alive and well in my body.

In 1969 I had begged Dartmouth’s power brokers to let me stay and get a degree. It didn’t happen. Walking into Commencement with the class of 1969 would be the closest I could get. It was an unabashed thrill. I sat with those who wore teal armbands to protest sexual assault on campus and beyond and watched men and women receive degrees in equal measure. I almost cried again when Yo-Yo Ma rose to speak.

“You will be powerful,” he said. “And when you are, do not abuse your power. Ever. Remember, always, that you are a human being first. It’s a truth embedded in the very foundation of your liberal arts education. Practice your humanity daily. Practice that truth. Let it power your decisions, let it inspire your thoughts, and let it shape your ideals. Then you will soar. You will fly.”

As he played his cello, I knew life could not get better than this moment on the Green. Then President Hanlon addressed the graduates. “In 1962 Dartmouth pioneered a new model for performing arts centers across all of higher education with the opening of the Hop. Not long after, the Dartmouth theater department served as the earliest pathway for women on this campus, some of whom are seated amongst you today as proudly adopted members of the class of 1969.”

I was stunned. So used to being unseen, I almost missed it. It was only when Nanalee and Kammy jumped up screaming did I realize what had happened. After 50 years of crying in the wilderness, Dartmouth College had formally acknowledged my existence. In an instant my story came full circle. Reunion had brought me home.

Lynn Lobban is a performer and writer. She recently completed her memoir, One of the Boys: Surviving Dartmouth, Family, and the Wilderness of Men. Her story about pledging a fraternity, “One of the Boys,” appeared in the September/October 2014 issue of DAM.

You May Also Like
One of the Boys
One of Dartmouth’s early female exchange students pledges a fraternity.