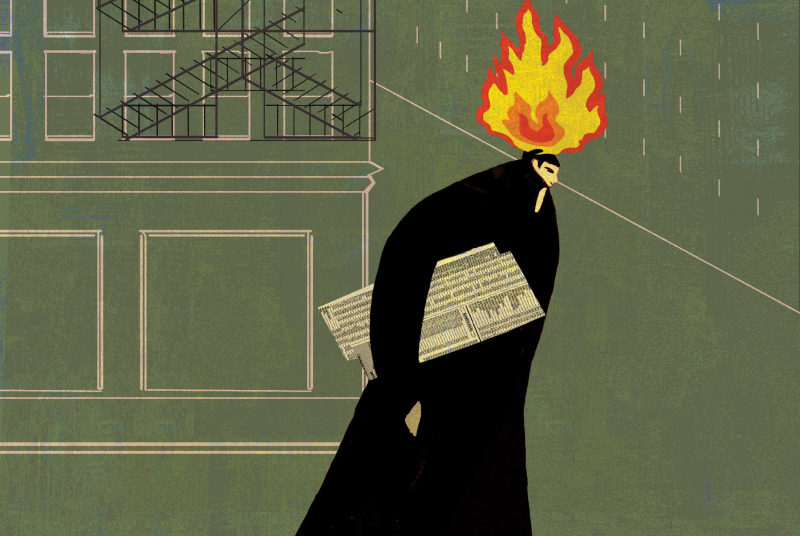 Boy, does Sandy “Fuse” Petty have lots of scores to settle. The pugnacious protagonist of False Light, Dezenhall’s semi-comic thriller set in an alternately grimy and glamorous world of Washington, D.C., journalism, is something of a dinosaur in the business: a self-described “old white man” investigative reporter in his late 50s with the manners (and bite) of a snapping turtle. As befits his nickname, he lives in a perpetual slow burn, plotting ways to get back at those who have wronged him, including the left-leaning female coworker who has managed to get him suspended from his job at a famous newspaper on a trumped-up ethics rap. It’s only his wisecracking sense of humor that keeps him from being a total piece of work, although even that’s debatable. 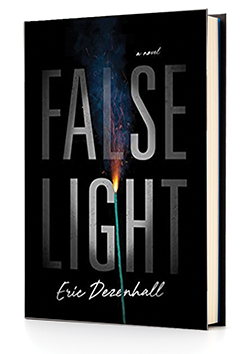 Fuse is grumpy about “gotcha” journalism, which he believes led to the suicide of one of his colleagues’ subjects, and about liberal bias in the media, including its coverage of corporations, which he seems to think have been unfairly targeted. (Dezenhall seems to be drawing here on his background as a crisis-management consultant in the nation’s capital, where he has helped corporate and other clients navigate shark-infested waters.) Fuse also carps about his elderly father, who’s always guilt-tripping him about the paucity of their quality time together, and has a special distaste for wealthy, entitled people who engage in public displays of pique. In one early, memorable scene, Fuse humiliates and threatens a man who barks at a waitress at a nearby table. Short fuse indeed, a fact that his reflexive joking only partly obscures.

Most important, he’s a bit of a revenge addict and, despite his rudimentary internet skills, a burgeoning “plumber” (as he calls it, using a Watergate metaphor), sometimes employing shady surrogates to do his dirty work. He goes after a colleague by having a pickpocket steal her smartphone, then gets a government spy named Goblin to access her texts and emails. Later he targets her finances, using subterfuge to undermine her ability to earn admittedly exorbitant speaking fees.

All this means that when it’s time to deal with a liberal media star accused of having raped his friend’s college-student daughter, Fuse is the man for the job. After determining the unlikelihood of justice being served in court, he swings into action, surreptitiously probing for weaknesses in the man’s financial and psychological armor, figuring out “what makes him tick,” and then—well, you get the picture. Justice, of a different sort, is served.—Kevin Nance

Set in Los Angeles in 2041, this noir science-fiction fantasy follows a detective’s quest to unravel the case of a stripper’s fatal overdose, which leads to a geneticist working to cure a virulent strain of Alzheimer’s and a criminal network involving reproductive technology. The writer—who teaches film studies and classical mythology at Pepperdine University, UCLA, and Cal State Northridge-—studs her story with imaginative, futuristic details and gives it a surprising Oedipal twist.

A popular professor at a small men’s college in New Hampshire drops dead unexpectedly in 1970, which sends his wife on a path of self-discovery, helped by the four outspoken women on the faculty whom her husband often mocked. Told through several deftly drawn characters, the tale is entwined with the tumult of the era as the college grapples with political unrest and the fledgling women’s movement.

Parents get anxious, and their kids get confused, about the many considerations involved in choosing a college. This resource guide, coauthored by a national education reporter and the departing dean of admissions at Penn, helps sort through each step of the process and frame the chronology of necessary discussions about the search.

This examination of several immigrant writers from 1900 to 1960 questions sublimation of their minority identitities as they seek to assimilate and embrace the American dream. Rana, a professor of English at UC Santa Barbara, contends writers should incorporate ethnic heritage into their literary characters to avoid perpetuating views of American exceptionalism.

Geraldo Cadava ’00 details the rise of Latino American GOP voters and their growing impact on U.S. politics in The Hispanic Republican: The Shaping of an American Political Identity, from Nixon to Trump (Ecco).

In Fútbol in the Park: Immigrants, Soccer, and the Creation of Social Ties, David Trouille ’02, a sociology professor at James Madison University who played soccer while at Dartmouth, examines how the past half-century of immigration from Latin America has resulted in the rise of park soccer in the U.S. (University of Chicago Press).

A New Idea of India: Individual Rights in a Civilisational State, coauthored by Harsh “Madhusudan” Gupta ’10, takes issue with the Left’s domination of India’s intellectual landscape over the past six decades (Westland).

In The National Road: Dispatches from a Changing America, Tom Zoellner, Adv ’11, crisscrosses the U.S. in search of its evolving “whereness,” in engaging essays that are at times nostalgic, at others awed, and that ask how the country can be stitched together as a whole, particularly in this time of frayed national spirit (Counterpoint Press).

Catch Lili Too by Sophie Whittemore ’20 features an asexual siren who struggles with depression because she has lived so long and spices up her eternal existence by becoming a vigilante detective trying to track down a serial killer (NineStar Press).

Sharon Yoon ’04 explores how the rise of transnationalism affects the lives of South Korean entrepreneurs searching for wealth and stability in China in The Cost of Belonging: An Ethnography on Solidarity and Mobility in Beijing's Koreatown (Oxford University Press).

In his second novel, Virga Joy, or the Adventures of El Colonel De Corona, Douglas Kimball ’76 tells the tales of two friends who develop the first black pepper plantation in the West Indies and later collaborate in the U.S. military’s anti-opium initiative in Afghanistan (self-published eBook).

The Measure of Gold, a World War II novel by Sarah C. Patten, Adv ’03, is the epic tale of a courageous American woman who heads to Paris shortly after the German invasion and gets wrapped up in daring espionage (Ashland Press).

In A Handbook for Bullying Victims Bruce Sherman ’53 reviews various categories of bullying, addresses the legal issues that parents of bullies can face, and compiles a variety of resources for victims of bullying (self-published).