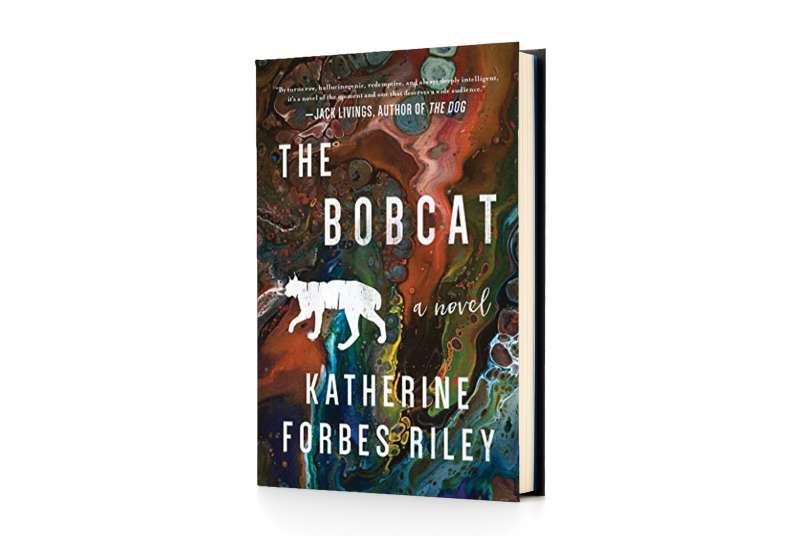 Melville had his whale, Faulkner his bear, and Forbes-Riley’s debut novel has at its symbolic center a bobcat. And not just any feline predator. Her cat limps, having been shot in the leg by a hunter. Belly distended, she is about to give birth. In this tightly crafted magical realism novel, she is pregnant, not just with kittens, but with meaning.

Laurelie, an art major at a sleepy Vermont college, first sees the bobcat from the forest as it laps at the riverbank “slowly, dreamlike.” She watches as a hiker emerges, crouches, and caresses the animal. “He and the cat shared a kind of family resemblance,” she thinks.

The hiker is Lucien, a landscaper who has trailed the cat for 300 miles. His name means “light-bringer.” Brightness is what Laurelie needs. She fled another college after being drugged and raped by “shark faced” frat brothers. Now living in a “fairy cottage,” she struggles to heal herself through painting. Her works mimic the fractured violence of Picasso’s Guernica, Bosch’s freaks, and DeKooning’s monsters.

But with a name like Laurelie, a homonym for the mythic German river siren who lured men to their doom, readers will wonder what fate awaits mysterious Lucien, who we are told sees like an owl, hears like a hawk, and whose touch is as sensitive as a mole’s. He has his own wounds, and when the pair falls in love, he tells her, “You can raze a plant all the way to the ground and it won’t die. Not unless you get the roots.”

Forbes-Riley is well grounded in words. She has a Ph.D. in computational linguistics, a field whose members “view language as hot and alive, something that grows and changes,” the author tells DAM. It took six years for her to write The Bobcat. “You have to bleed—the creator and the art. You can’t just be slick on the surface,” she says. “You have to dig, and if it’s not bleeding enough, you have to make it bleed.”

The author lives in Norwich, Vermont, with her husband, studio art professor Enrico Riley ’95. She says her character’s rape reflects an all-too-common occurrence on college campuses generally and is not about Dartmouth.

“College is a microcosm of the entire world,” she says. “Sexual assault goes on all the time in college, and it’s mostly not reported. Laurelie just kept it to herself. She had no proof. That’s a common scenario.” —George M. Spencer

Read an excerpt from The Bobcat here.

Horton, the Grinch, and the Cat in the Hat pop up in this seventh posthumous book by the grandmaster of children’s literature. Based on a partial manuscript found in Geisel’s “Noble Failures” file, this tale of a horse leading an art museum tour features Seuss-like illustrations by Andrew Joyner and photos of equine art by Picasso, Pollock, and others.

“I was drugged—bewitched—by a roaring golden river,” writes Leich, who in 1933 became the first person to run the upper Colorado River in a kayak and a hand-built boat, the Dirty Devil. His narrative recounts the perils he faced when his boat sank in the forbidding 1,500-foot deep Cataract Canyon and he hiked shoeless out of the wilderness—with little more than onions to eat.

The history of Tin Pan Alley and the Great American Songbook is told with panache by the host of the public radio show, Fascinatin’ Rhythm. He explains how Jewish immigrants, Harlem artists, and flappers during the Depression used new technology, such as cars and radio, to create some of America’s most memorable music.

“A new era of human freedom is upon us,” thanks to digital and social media, according to Professor Daniels, who teaches law in South Korea, London, and Washington, D.C. He tells more than 24 cyberspace-related human rights success stories from China, Colombia, Saudi Arabia, and elsewhere to show that the Internet is humanity’s “antidote to extremism.”

What makes a school great? That’s the question asked—and answered—by education consultant Clavel, who sent her three children to schools in Hong Kong, Shanghai, Tokyo, and Palo Alto, California. “The alternatively crushing and euphorically rewarding experience transformed me into a strong and far more empathetic woman and mother than I ever thought I could be,” she writes.

Norman Fine ’55, Th’56, tracks the evolution of radar from a technical curiosity to a powerful offensive weapon that secured the Allied victory in Blind Bombing: How Microwave Radar Brought the Allies to D-Day and Victory in World War II (Potomac Books).

LegendaryVillage Voice rock critic Robert Christgau ’62 reflects on his love of the written word and cultural criticism in Book Reports: A Music Critic on His First Love, Which Was Reading (Duke University Press).

Eleanor (Billings) Richardson ’69 follows two generations of men from Maine who catalogued their lives in diaries that span 80 years, including the state’s nascent statehood, as editor of The Ingraham Diaries, 1795-1875 (self-published).

Arthur Hittner ’71 tells the story of a baseball player—who loses a digit to a mob goon in a case of mistaken identity—in his black comedy and second novel, Four-Finger Singer and His Late Wife, Kate: A Novel of Life, Death, and Baseball (Apple Ridge Press).

High school literature and writing instructor Richard Braithwaite ’72 details the wild adventures and passionate loves of a Dartmouth student-teacher during the early 1970s in this second novel in a series, Angel: An Old Chaos of the Sun(self-published).

Doug White ’75 investigates the effort to marginalize one of America’s most vital charities—with interviews of former board members, beneficiaries, and those who published damaging information—and why some of the criticism was unfounded in Wounded Charity: Lessons Learned from the Wounded Warrior Project Crisis (Paragon House).

Benjamin Kwakye ’90 focuses on the strains of both voluntary and forced relocations during the dehumanizing odyssey of migrantsin search of hope in Obsessions of Paradise (Cissus World Press).

University of Wisconsin-Madison public affairs professor Gregory Nemet ’95 journeys through 18 countries to examine how solar energy became so cheap and the lessons its success offers for future technological advancements in How Solar Energy Became Cheap: A Model for Low-carbon Innovation (Routledge).

Robin Globus Veldman ’02, a religious studies professor at Texas A&M University, explores the blurry boundary between anti-environmentalism and the social world of conservatives in The Gospel of Climate Skepticism: Why Evangelical Christians Oppose Action on Climate Change (University of California Press).

In Huge Cloudy (Octopus Books), poet Bill Carty ’03 assesses the coastal environments of his home state of Maine as well as the neighborhoods of Seattle, where he has lived for more than a decade, with “the eye of a particularly fine journalist,” according to the Seattle Review of Books.