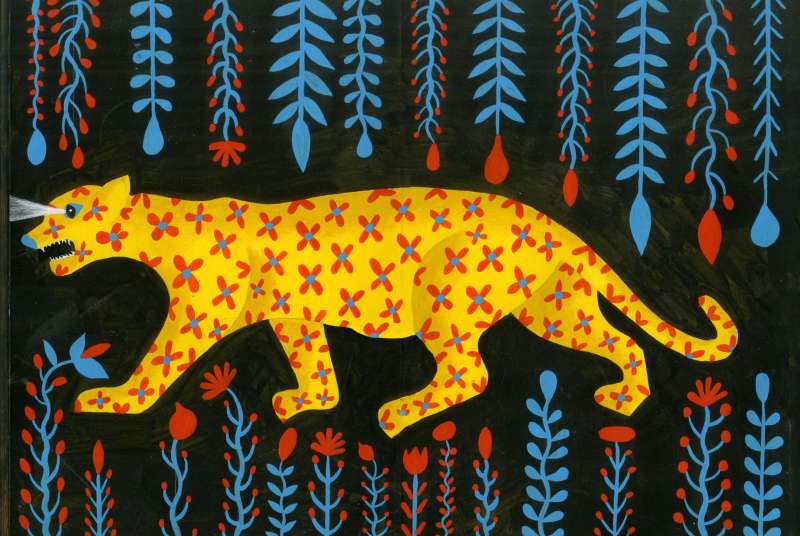 Thinking Rock jutted out of the river ten feet from shore, perfectly flat and glittering darkly, the air above it sparkling as particle-filled rays of sunlight filtered down through the canopy. She lifted the boy up first and then clambered after him, and they sat with their backs in the direction they’d come, looking out over another twenty feet of water stretching away on the other side. The rock must have marked a hidden chasm, for it seemed another river entirely here, this one deep and fast and wide. Every time they came its color varied, as did its flow. During the winter it had ranged through every shade of black, sometimes glossy and others dull, its edges frozen and piled with snow, while the middle still pulsed its thick life’s blood. But as spring took hold it had lightened and thinned; the last time they’d come it had looked like chocolate milk.

“Gee,” the boy pronounced, and then with a hint of ceremony, began removing stones from his pockets. Laurelie unrolled her shirt and handed over the items within, one yellow forsythia branch, one dead orange and black caterpillar, one smooth stick bare of bark, one drooping cluster of bluebells, and one still-crisp white narcissus. All of these he carefully arranged according to some private order, shifting and reorganizing the whole lot often to accommodate each new piece. While he worked she leaned back with her legs dangling down over the side of the rock, barely brushing the water, and considered its color herself. The boy was right, there was green inside the brown today, she decided, a deep lustrous olive.

“Buh.” He’d been turning a smooth gray rock in his hands, and now dropped it into the deep side of the river.

“Yes, it did bubble,” she affirmed, “when it sank. Which one of your treasures won’t sink, do you think?”

After considering the question awhile, he threw in the forsythia branch, and together they watched it float away, seeming at times to struggle and others to tease as it swirled into eddies and snagged on roots but always worked its way free.

Once the boy had given all his treasures to the river, she fished a granola bar from her pocket and they shared it. The sound of their crunching merged with the river’s low burble and the forest’s stillness, which seemed to have a sound all its own. In her head she was sketching it, soft and full of light with the trees reflecting back the color of the sky in the style of Monet, when a squirrel rattled a warning high in a tree. Abruptly the scene twisted, turning hellish, hedonistic, as the squirrel continued rattling and the boy clutched her shoulders, crying, “Caa!” over and over until she too turned to see.

At first there was only the forest. The riverbank, trees, river, and the trail from which they’d come. Then a shape she’d taken for shade detached itself from a large growth of ferns off to her left. Slowly, it approached.

The boy was right. It was a cat. Although this one was three times larger than her own boy cat, at least. It had a tan coat with black striping that hung loose down its legs and then fluted out into a ruff of a lighter hue around its neck. Its ears were large and black and tufted, and its tail was just a stump. Silently it padded to the water’s edge, and then stopped and bent its head. Its tongue emerged and began lapping at the water, slowly, dreamlike, the pink flesh shedding fat droplets from both edges that sparkled as they fell, full of sunlight.

“Hush,” she said to the boy and squeezed him, for the large cat had frozen when he spoke, and was now staring directly at them.

She herself had no urge to pet it. Even the idea made her lose her breath. The cat was stunning, but in her mind’s eye each element of its beauty equally signaled threat. Its eyes and ears and nose and mouth appeared to her like giant receptors, constantly seeking prey. Its rear legs were thickly muscled, and disproportionately longer than its front ones, built for catching prey. Its four large paws looked soft and puffy but they bore strong curved claws sheathed beneath, precisely spaced to hold and puncture prey. Now that it had finished drinking, she thought it would surely leave, but instead it sat back on its haunches and cleaned first its face and then its ruff. And then, when it finished its ablutions, it just sat there, staring off at the trees as if it had forgotten all about them. But one of its ears was still aimed in their direction, and it twitched with every movement she or the boy made. The longer this dissemblance went on the greater her anxiety about it became, until finally she forced her gaze away. Beyond it the trail beckoned, promising safety, but the cat sat too close, barely a foot to its left. Looking behind her, she gauged the distance to the opposite shore. Nothing had changed. It was still too far and cold and deep to swim with a two-and-a-half-year-old boy.

She swiveled back fast, half-bracing to jump, and saw a second form emerge from the trees. This one was human, and male. Panic swamped her and then slowly dissipated as she took in the boots he wore and the pack on his back, for he was surely an AT hiker, and a lost one at that. The Appalachian Trail threaded through this forest preserve a few miles from where she sat. As he got closer she observed more of the details of him, how tall he was and how thin, the depth of color of his exposed skin, but because he was looking down at the ground all she saw was a wild mass of dark hair.

Had he even noticed the cat? For that matter, had it noticed him? It still hadn’t moved, beyond the single flick of an ear. But even as she was wondering what to do, the hiker looked up. She only saw his face for a moment before he returned his gaze to the ground, but it was enough to register his lack of surprise as he surveyed the scene, and she took this as an indication that he’d already processed it.

Head down again, he proceeded to the river and there crouched behind the cat, who for its part stretched languorously and then turned and bumped its head against his knee. The boy could barely contain himself as the hiker trailed a slow hand down its back. Laurelie, however, now observing the cat from the side, was shocked by how swollen its belly was, distended so far it nearly touched the ground.

The hiker was gazing at the cat, who was gazing back at him. His eyes were long and wide-set above sharply jutting cheekbones, and his mouth was broad and slightly pointed at its edges above a triangular chin, so that looking back and forth between them, Laurelie thought he and the cat shared a kind of family resemblance.

Then, as she watched, his eyes filled with tears, and one spilled over, tracking luminescent down his russet skin.

Flushing hot, Laurelie looked down at the rock, at her pale knobby feet, at her dirty T-shirt smeared with pollen and pine sap. He wasn’t actually crying, she told herself, and yet the boy in her arms seemed to think so as well, for already his face was bunching up in sympathy. Hearing him whimper, her own fear swelled. Gripping him tightly, she slid down off the rock and began sloshing away through the shallow water, intending to give both cat and hiker a wide berth before heading for shore.

But the boy cried out, “Daa!” He wanted down. They struggled for a few steps, each one’s distress only escalating the other’s until finally she gave in. The moment his feet touched water he calmed, grew placid even as she hurried him along, telling herself the cat wasn’t following even as she imagined on her back the grip and tear of its claws.

Reaching the riverbank, she cut straight through the brush for some yards before heading back toward the trail, so that when they did break onto it they were already a few yards along. She stopped then, they both did, their heads turning in unison to locate the intruders once more.

If they hadn’t looked at just that moment they would have missed the cat, for it was loping back toward the ferns from which it had come. Laurelie’s relief at seeing the threat reduced by half faded as she watched the cat move away. At that distance its beauty overwhelmed its risk, but also conveyed clearly that something was wrong. For one step of every four was out of rhythm with the rest. The cat was limping—badly.

The boy had lost interest in the cat. He’d spied their shoes at the head of the trail and was trotting back for them. “No!” Laurelie said, reaching out to stop him. When her hand closed on air she gasped and hurried after him.

Already he was sitting down, preparing for her to put his shoes on. But his attention was fixed on the hiker, still crouched by the water’s edge, who had turned away now, and was gazing after the cat. Distantly, she thought, he looks like a dropped marionette, with those long thin legs folded and the arms and shoulders arcing over them. The corners of his mouth were pointing down and the space between his brows was deeply furrowed. He looked worried, she realized, and in the next instant, she said, “I think its leg’s hurt,” startling herself as much as him.

He rose then, all jostling towering limbs, swamping her again with the peril of him. She took an involuntary step back. But now he froze, just like the cat, and stood there looking off at the ferns from which they’d come. No ear swiveled, but still she sensed a kind of invisible field around him, trembling, listening. His hands were pushed deep into the front pockets of his pants, claws sheathed. She could hear his breath coming fast and shallow, saw his mouth was open and his nostrils were flared, pushing at their skin so hard the edges had gone white.

“A hunter shot her,” he said, and then after a moment, answering her unspoken question, added, “Not here. Up near Bangor, on Barren Mountain.”

Bangor, Maine. That was three hundred miles north. She wondered how they’d gotten here and decided they must have walked.

“She can’t hunt, so she won’t den. Just keeps running.” A ripple traveled over his shoulders then. “Kittens’ll be coming soon,” he said.

“Caa,” said the boy. She looked down at him. Next to him on the forest floor was a pile of tight green pine cones. He was opening and closing his hands and regarding them with an intent expression. In the same instant she realized they were covered in sap, he put them on his cheeks, first one, and then the other. He smiled at this, until he tried to pull them off again. She sank down then and gently peeled them free, and wiped them off as best she could with her T-shirt.

When she looked up again, the hiker was gone.

Reprinted from The Bobcat by Katherine Forbes Riley by permission of Arcade Publishing, an imprint of Skyhorse Publishing, Inc.