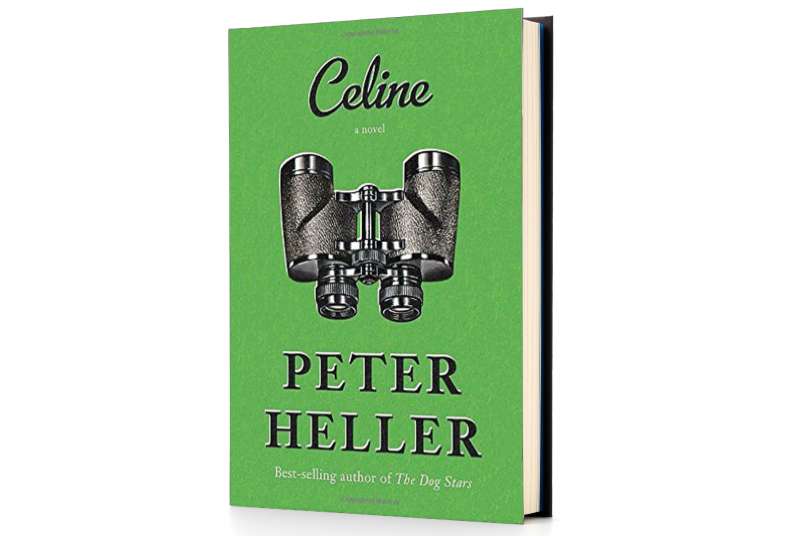 Peter Heller ’82
Celine
(Knopf)
It’s no easy thing, blending the literary novel with the detective novel. Ask any of the legion of writers who’ve laid siege to the citadel of that hybrid form—from either direction—and been repelled. A detective novelist with a flair for suspense and intricate plotting but no gift for language or nuanced insight is bound to fail. So is the writer with all the literary texture in the world but no real grasp of the unforgiving mechanics and non-negotiable velocity of mystery fiction.

Kudos, then, to Heller, who finds that elusive sweet spot between the two genres in Celine, a page-turning private-eye yarn that investigates not only a particular unsolved case but also some of the darker corners of human character. Add to this already potent combination Heller’s gifts for describing nature and his poignancy of feeling—delivered in the silken prose that readers have come to expect from the author of The Dog Stars and The Painter—and the result is that rare thing: a thriller that will satisfy readers on either side of the literary popular fiction divide.

The novel follows its eponymous heroine, a New York-based private detective (modeled on, we’re told, the author’s own mother) with an aristocratic background, a sympathy for underdogs and a special interest in finding missing people and reuniting families. Although worn down by the years and the losses mounting in her own life, Celine takes on the case of a beautiful former student whose father was killed by a grizzly bear at Yellowstone National Park—or was he? As Celine and her husband, Pete, make their way west, it becomes clear that someone is keen for their questions to go unanswered. Celine, naturally, has other ideas.

It will be interesting to see whether Heller writes more novels featuring Celine, entering her into an elite sorority that includes V.I. Warshawski, Kinsey Millhone and Kay Scarpetta. She’s older, richer and arguably wiser than any of them, but I bet they’d have plenty to talk about.   —Kevin Nance

Eric H. Cline ’82
Three Stones Make a Wall
(Princeton University Press)
An archaeologist with more than 30 seasons of excavation experience, Cline traces the history of archaeology from an amateur pursuit to the cutting-edge science it is today by taking the reader on a tour of major archaeological sites and discoveries, from Pompeii to Petra, Troy to the Terracotta Warriors.

Leonard Chang ’91
The Lockpicker
(Black Heron Press)
In Chang’s eighth novel, jewel thief Jake Ahn escapes from a burglary that turns violent when his partner tries to double-cross him. Jake flees to his brother’s home, a move that awakens the siblings’ painful memories of childhood, while his ex-partner continues to hunt him.

Susan Barba ’97
Fair Sun
(David R. Godine)
The New York Review of Books senior editor explores the primary importance of connection—with other human beings and with the natural world—through three interrelated sections of poetry. She moves from poems that are wide-ranging in locale and reference to a series of prose poems involving a child speaking with her grandfather to a section of shorter lyric poems that explore the proximity of life and death.

Ulrich Boser ’97
Learn Better
(Rodale)
Education researcher Boser took basketball lessons from a former Harlem Globetrotter, spent time with the country’s foremost ER doctor and profiled a recent Jeopardy winner to explore the new science of learning. He argues that learning is a skill, and explains how techniques such as self-questioning and thinking about thinking can create much deeper levels of understanding.

Meg Donohue ’00
Every Wild Heart
(William Morrow)
In her fourth novel, Donohue follows radio personality Gail Gideon and her 14-year-old daughter, Nic, whose behavior has become increasingly risky following a coma. This mother-daughter tale is a “beautiful combination of mystery, hope and most of all self-acceptance,” according to Library Journal.

S. Martin Lindenauer ’54 delves into the 1975 poisoning of patients at a Michigan hospital and the controversial investigation and trial that followed as coauthor of Paralyzing Summer: The True Story of the Ann Arbor VA Hospital Poisonings and Deaths (University of Michigan Press).

Richard Taylor ’59 “seeks out the intimate stranger in ourselves and each other,” he writes, with poems that explore the themes of absence, affection and the fellowship of strangers in his collection, The Absence of Strangers (Goose River Press).

Peter Klaren ’60, a former professor of history and international affairs at George Washington University, considers how the origins of Peru’s most important and enduring political party of the 20th century were caused by the rise of industrial sugar plantations in Formación de las haciendas azucareras y los orígines del APRA (Formation of the Sugar Plantations and the Origins of APRA), published by Instituto de Estudios Peruanos.

Screenwriter Steve Adams ’69, writing under the pseudonym Waldo Mellon, offers memorable mechanisms for coping with the challenges of living in his guide—part self-help parody, part sincere wisdom—What’s What And What To Do About It (CreateSpace).

Charles Ault Jr. ’72, a former elementary school teacher with a degree in history, frames the telling of the evolutionary origins of elephants, whales, tetrapods and birds with whimsical imagery in Do Elephants Have Knees? And Other Darwinian Stories of Origins (Comstock Publishing).

Clinical psychologist Seth Swirsky ’82 leads readers on a hands-on journey to personal growth that includes a combination of art, activities and anecdotes in 21 Ways to a Happier Depression: A Creative Guide to Getting Unstuck from Anxiety, Setbacks, and Stress (Sourcebooks).

Rachel Federman ’98 draws on her experience as an author—with 20 published nonfiction books, including an upcoming collaboration with the New York Botanical Garden called The Mindful Gardener—to offer a four-week kit of tips and tricks in Writer’s Boot Camp: 30 Days of Total Writing Fitness (Harper Collins UK).

Kimberley Tait ’01, with a nod to F. Scott Fitzgerald—the subject of her senior thesis—traces the path of bright young things from Hanover into the unsentimental realities of post-graduate life in millennial Manhattan in her debut novel, Fake Plastic Love (Flatiron Books).

Henry Russell ’15 offers a coming-of-age tale of two boarding school roommates with contrasting spiritual philosophies—one who believes God wrote him a personal destiny to win a marathon, the other a well-endowed metaphysical libertarian (and libertine)—in his first book, The Talisman Cock! (Back of the Fish Publishing).