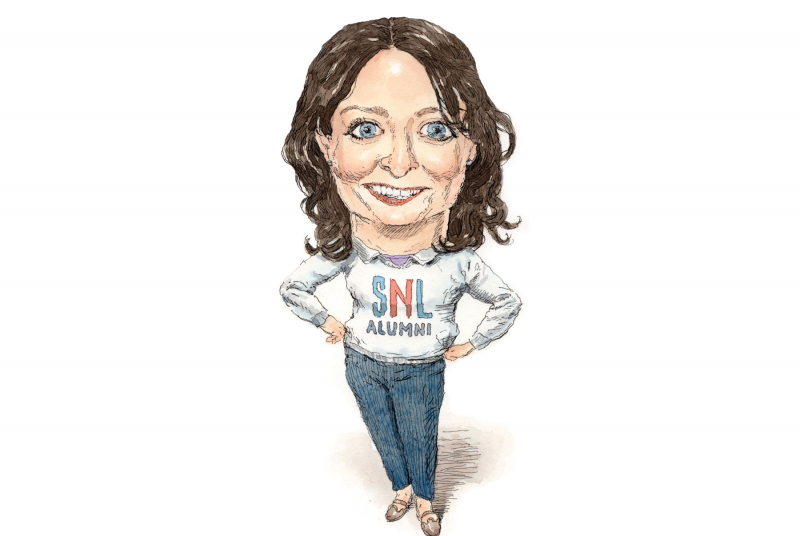 Notable: 2022 Tony nominee for first Broadway performance, in POTUS; recent and forthcoming films include I Love My Dad and Spider-Man: Across the Spider-Verse (voice role); author of Girl Walks into a Bar (2012), a memoir that opens at Dartmouth and concludes with motherhood at 43

“I grew up with a comedian’s mindset. My dad was very witty and funny. He did impressions of people. My parents also watched a lot of comedy on TV so I grew up watching Carol Burnett and Laugh-In and kind of stumbled across SNL. I was really fascinated by it even as kid.”

“I don’t know what makes someone funny. It’s really hard to dissect comedy. I do know you don’t have to have performance energy to be funny. I guess you have to have a vulnerability about yourself.”

“Getting into the entertainment business isn’t as clear-cut as getting into business or law or medicine. You have to find your own way. Because I come from improv, when young people ask me for advice I tell them, ‘Go to an improv class somewhere and you’ll find like-minded people.’ Not only will you get better, get more stage time, but you’ll accidentally network. If you write as well as act, you’ll have more agency. People are always looking for a good story.”

“Writing is fun when it’s done. Doing it is kind of like climbing a mountain. You don’t even want to put on those hiking shoes, but when you’re done you’ve accomplished something. I like writing with someone else. I like collaborating. I didn’t really intend to be a writer, but at Second City, I had to come up with ideas and sketches as part of the job.”

“When you’re starting out, it’s easy to panic when you see a friend or some novice get a big role. You start thinking, ‘It’s never going to happen for me.’ But as long as you’re getting better every year, you can go at your own pace. No one I’ve worked with had a five-year plan.”

“Doing POTUS was a powerful experience because it featured a group of women dealing with issues people think about today. You could feel people laughing in the relief of being in a community. It felt good to have the experience of a comedy helping to process shared pain. Watching SNL’s weekly sketches is like that. Taking a moment to laugh can feel pretty good.”

“Being nominated for a Tony was a crazy dream-world, pinch-me moment. I thought it was cool not just for me but for comedy.”

“I really like being around funny people, but it’s not a requirement. I just naturally have a lot of very funny friends. I wouldn’t want to be around people who are always making jokes, though, and always on and never having real moments.”

“I have fond memories of just about everything in my career. SNL was a dream job that also had a lot of stress attached because you had to come up with characters to try to put yourself on the show. When I was first off the show, I’d be like, ‘What are we doing Saturday?’ Now I’ve been off so long it’s fun to go back for little guest spots and just be in the building.”

“I don’t wish I could go back and do any job again because it’s a journey, a beads-on-a-necklace sort of thing. Each thing you do teaches you a little something. I feel a lot better at my work now than I did 10 or 20 years ago. You get into a groove as you get older.”

“There’s a Debbie Downer in me whom I suppress. I don’t think I make the facial expression in real life, but I can have that reaction to something in the news. Unlike Debbie, I keep it to myself.”