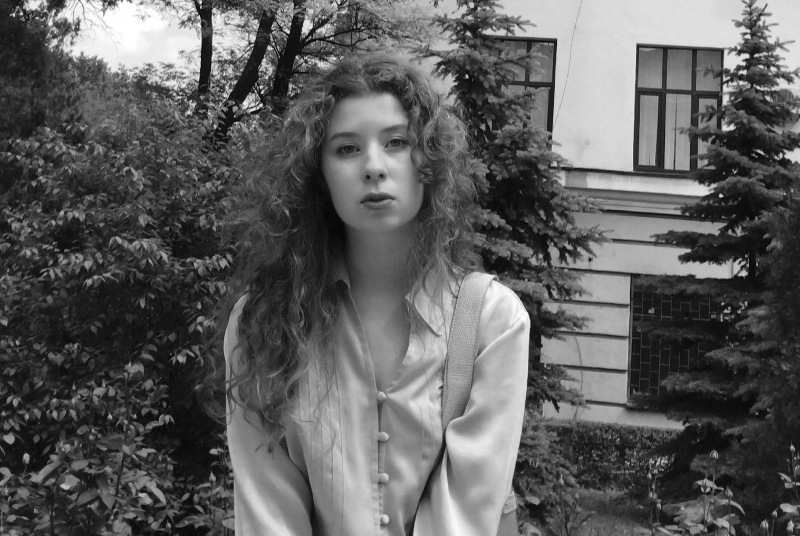 Hulievska, photographed in her Zaporizhzhia neighborhood last year, is one of 1,700 Ukrainians attending college in the United States. (Photo by Anna Haiuk)
Campus

“Standing Up for Democracy”

As Ukrainian student Marta Hulievska ’25 copes with the situation back home, she hopes to make a difference.
Svati Kirsten Narula ’13 | July-August 2022

One of five Ukrainian students enrolled at the College, Marta Hulievska grew up in Zaporizhzhia, Ukraine, and traveled to the United States for the first time last fall to begin her freshman year. Now she’s navigating her studies while worrying for her family’s safety and joining other Ukrainian students to advocate for greater U.S. support of their country. DAM checked in with her on campus in early May.

What is your hometown like?
It’s a city of about 800,000 people in eastern Ukraine. It’s near Donetsk and Luhansk, areas that Russia occupied in 2014. My father was a lawyer for the local refugee center, and I volunteered there, and my grandmas were working as doctors for refugees. So we have been in touch with this war stuff since 2014, but I never thought my family would become refugees. Is your family still there? My father had to stay because men are not allowed to relocate. My mom, my grandmother, and my two siblings went to Lviv, in western Ukraine, on March 3. Lviv has admitted a lot of refugees from eastern Ukraine, and we have relatives there, but there are now two families living together in a two-bedroom apartment.

How often do you speak to your family?
I try to speak to them every day. Usually when I call my dad, he’s in complete darkness because everyone has to turn off the lights after 4 p.m. If you turn on the lights, the Russian troops might see where the lights are and assume that this is a civilian area and bomb that. My city is not occupied, but the whole region around it, all the small towns and bigger towns, they’re all under Russian occupation. We fear that the next step might be escalation of the conflict in my city.

Before the invasion in late February, did your family have a sense that it was coming?
It was pretty surprising. I remember that the news about a possible invasion—from U.S. intelligence saying Russia was gathering troops—started in December. Of course it was getting me nervous, and I was kind of scared to ask my parents about it, but I did. They were saying that [Russian President Vladimir] Putin was not going to invade. I don’t know if they actually believed that or they just wanted me to believe that, but this was kind of the consensus among the Ukrainians here at Dartmouth too. No one was expecting it to happen. That was a huge shock.

How are you handling your academics during spring term?
I tried to take a term without classes, an off term, but it would interfere with my visa. I’m taking three courses now. Honestly, it’s complicated because a lot of time goes to activism with the Ukrainian Student Association—it’s a lot of meetings. My mental state has been….I just went to class and I felt like I was absent. Sometimes you’re just sitting there, and you start thinking about what’s going on in Ukraine and everything seems senseless. I attend classes, but I wouldn’t say that I’m 100-percent committed as I want to be.

Are you also in touch with Ukrainian students at other schools?
Ukrainians are a very tight-knit community. I’m part of an organization called Ukraine Global Scholars, which helps Ukrainians from low-income backgrounds enter boarding schools and universities in the United States. There are around 150 of us, and we are in constant contact. In May we traveled to D.C. for a reunion sponsored by the Ukraine embassy.

You’re the president of the Ukrainian Student Association at Dartmouth?
We started it in December. Since then we have done rallies, fundraisers, and vigils, including our current fundraiser for families of Dartmouth students affected by the war. We are trying to get $25,000, or $5,000 to each family. My parents, for example, lost all sources of income and they are unable to work. No one knows how long it is going to stay like that. Another student is the sole provider for her family, and she has her little sister coming to the United States and needs to support her.

“I think having a home to return to is a very big question right now.”

What kind of support has Dartmouth offered to you and the other students in this situation?
Primarily, we are getting support through two Ukrainian professors, [chair of the Russian department] Victoria Somoff and [assistant professor of German] Yuliya Komska. I think most of the support we have gotten is because the professors were negotiating for us. They’ve been a huge help.

Do you have any idea when you might see your family or home?
I think having a home to return to is a very big question right now. They started shelling my city, and in some of the cities of Ukraine, all the buildings have been destroyed. I was supposed to go back for summer, but it might be unsafe. My best guess is that I might get back for winter, but I still don’t know.

Is there anything else you'd like Dartmouth alumni to know?
I think it is very important to just not stop caring and not forget about Ukraine. What Ukraine is doing now is standing up for democracy and freedom, for the values that we all care about, for the freedom to just live on our own land. Contacting your representatives works a lot—that’s something we ask all Americans to do. The other thing we emphasize is that if people are comfortable, donate to the Ukrainian army, a defensive army. It might feel better to donate to refugees, but if we donate to the army, it makes for less refugees in the end.