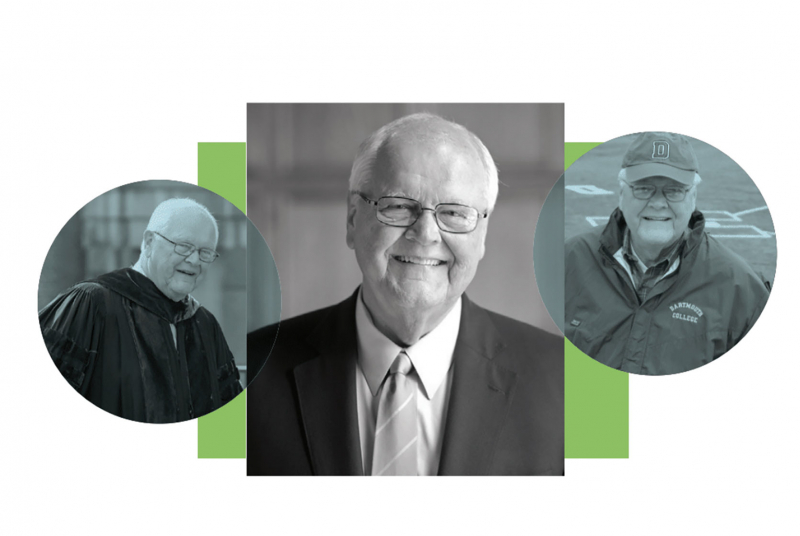 Mourners gathered in Alumni Hall in late October to celebrate the life of Dartmouth’s 16th president, James Wright (1939-2022). “He was a blessing,” college chaplain the Rev. Nancy Vogele ’85 said during her invocation, “and a truly good man.” Other speakers followed, including chair of Native American and Indigenous studies program Bruce Duthu ’80, author Louise Erdrich ’76, and Dartmouth President Phil Hanlon ’77.

Former College President Jim Kim recalled his first meeting with Wright, whom he succeeded in Parkhurst. After hearing the resounding, deep voice of his predecessor, Kim hesitated: “I thought to myself, wow, President Wright is so thoughtful, well-spoken, so warm and inviting. It seemed to me he possessed the actual voice of God. How can I possibly follow him?” Through tears former trustee chair Susan Dentzer ’77 declared Wright to be “all heart,” adding that his stature—and again, that voice—would have made the Marine a great candidate to play a Roman general in a Charlton Heston movie. Annette Gordon-Reed ’81 noted that Wright was one of her favorite professors, and others, including his three children and six grandchildren, remarked on Wright’s love of three sports teams: the Green Bay Packers, Boston Red Sox, and Boston Celtics.

The only Marine to serve as an Ivy League president, Wright died October 10 at his Hanover home. He was 83 and had been receiving treatment for cancer. He started at the College in 1969 as a history professor before becoming president in 1998. Many alumni remember him most for his “Cowboys and Indians” course. Wright also helped create the Native American studies program, which launched in 1972. As president his 1999 “student life initiative” generated controversy as it imposed new restrictions on Greek life and sought to curtail student drinking and bolster residential life.

Wright, who grew up in Illinois and enlisted in the Marine Corps at 17, never forgot his humble roots. “I was always interested in making sure that Dartmouth was accessible and available to students who were the first generation of their family to go to college. I was that,” he once said. Following his presidency, Wright worked with and wrote about veterans, and he visited wounded soldiers at military hospitals. “He was an admirable human being,” James Mattis, retired four-star general in the Marines and former U.S. secretary of defense, told The Boston Globe. “All the way through.”