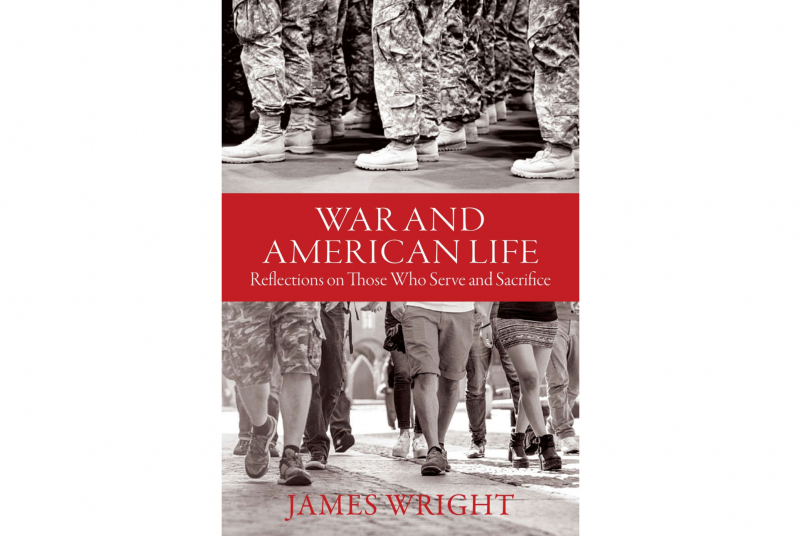 An excerpt from “War and American Life,” a collection of essays about U.S. veterans
James Wright | May-June 2022

A story I have told a number of times illustrates and perhaps symbolizes why working with veterans is so important—and so satisfying. And why I persisted with all of the cajoling and nagging and encouraging that is described in this book. It is about climbing mountains together.

In 2009 as I was preparing to step down from the Dartmouth presidency, I determined that I wanted to climb Mount Moosilauke, a mountain to the northeast of the campus that the college owns and that is an important part of the Dartmouth story. In my fortieth year at the college, I decided it was time to do this. I was approaching age seventy but was relatively fit, or at least thought I was, and knew it was not considered a difficult climb—or, as I learned, it was those younger and/or more fit than I who thought so. My wife Susan signed on eagerly to go and I invited a few Dartmouth students and some friends to join us. Fourteen of us set out on a pleasant May morning, Memorial Day weekend, for this trek.

Among the students, I had invited two Marine veterans to climb with us. One of them was the Fallujah veteran whom I had first met at Bethesda in July 2005. He was doing well in his class work and insisted he was physically able to take on this hike. Before we began I joked to the two Marines that they had a special assignment: to remember that Marines don’t abandon other Marines out along the trail!

Very quickly I realized that I was not in as good physical condition as I thought I was—and the trail was much steeper than I anticipated! This was not going to be just a walk in the woods. We each had a small backpack with some food and water and a few clothing items. Nothing substantial or heavy. But as I lagged at the end of our group, I saw these two Marines staying back with me and watching me. They had taken their assignment seriously! After a bit they asked if they could carry my pack. I replied dismissively: of course not, I could carry my own pack! A half hour later when they asked that question again, I quickly pulled off my pack and handed it to them.

We reached the summit, slowly but certainly. I slowed our pace but every- one was patient with me. And we all enjoyed the stunning 360-degree vista, from the Green Mountains of Vermont to the White Mountains and up to Franconia in New Hampshire. The trip back down was on a different trail, an old carriage road, and certainly easier. When we arrived back at the base lodge I sat for a few minutes in the shade of the lodge, looking up at the mountain with a new appreciation. And the Marine I had first met at the hospital came over and sat with me and returned my pack. I thanked him and as we looked up I asked if, when we first met in that hospital room four years earlier, he ever thought we would climb a mountain together—and that he would assist me, would carry my backpack. He acknowledged that he had not imagined such an outing.

Life is filled with mountains—and with surprises. I vowed that day never to climb a mountain again. I thought of that vow, along with the ones not to write a book and not to teach again, five years later when I stood at the top of Dong Ap Bia in Vietnam, the mountain that American soldiers knew as Hamburger Hill. I had climbed it with difficulty in the heat and humidity of late-summer Vietnam, along with an American veteran and two North Vietnamese Army veterans of the battle. I was as proud of doing this as I was of climbing Moosilauke, perhaps even more proud at age seventy- five. But my greatest pride in all of this was not my own modest physical accomplishments but comes from the pleasure of knowing that the young Marine who was wounded in Fallujah and climbed a mountain with me graduated from Dartmouth and completed medical school and is now an emergency room physician. He wanted to give back.

It is a good reminder of those who keep on giving: those veterans who served our country as volunteers still have much to contribute. And it is the responsibility of the rest of us to understand who they are and what they have done, and then to encourage them, to enable them to continue to contribute to the nation.

Semper Fidelis, “Always Faithful,” is the motto of the Marine Corps. Marines and Marine veterans often express to each other this or the more common “Semper Fi” as a shared salute, a bond. But I have learned well that Semper Fidelis is more than a slogan: it is a commitment, a lifestyle, and it is a commitment that is extended to all, not only to other Marines. And this commitment to serve and to support is shared by many others. E Pluribus Unum.