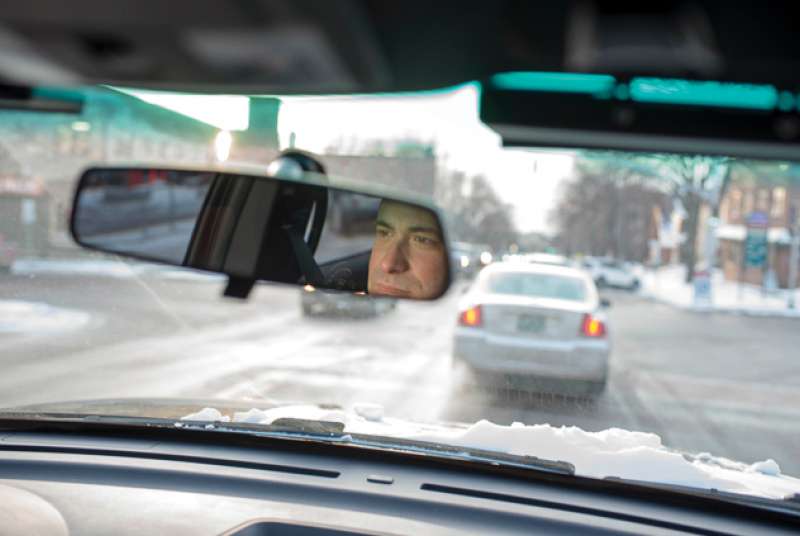 During the summer of my freshman year of college, I worked for an environmental advocacy group in downtown Manhattan. We would fundraise into the night, door to door. I would take the subway home, sometimes late. It was 1993. The crime rate was breaking records in New York City and this was the most dangerous thing I did on a routine basis.

There was a transfer I had to make at Atlantic Avenue in Brooklyn. One night as I peered north into the subway tunnel in anticipation of the shifting lights on distant rails that signaled the approach of a train, I noticed three or four young men descend onto the platform from a set of stairs. They were still far off, but as far as I could see, it was just us. Each of them sized me up privately, looking me up and down, then one muttered something to the others. I couldn’t hear what it was, but I had this feeling, one I had not been wrong about yet, that they were going to try to rob me. It would be the fourth time. I was 19. I turned around for a moment and took a knife from my bookbag and put it in my shorts pocket. I’d bought it at a flea market. The blade was short enough to be legal. I had been carrying it for years, sometimes with a can of mace, because I had learned that in New York City you might have to brandish a knife or spray chemicals in a person’s face just to get home. I had already done the latter once.

I decided it would be best for me to leave the platform and get on the next train. As I walked toward the stairs, the group walked toward me. When we met they surrounded me. One of them held up a switchblade, closed and gripped in his fist. “Give us what you got,” the oldest one, the leader, said. “Empty your pockets so we see the whites.”

I realized I was not going to fight these guys. I wasn’t the type to stab anyone over property and I wasn’t going to fight a group of muggers when one of them had a knife. I was terrified and just wanted to survive.

“Give it to me,” the leader ordered.

I pulled it out. It had been more of a talisman than a weapon. One of the kids took it and put it in his pocket.

“You can have everything I’ve got,” I said, “but I’m telling you, it’s only a dollar.” They were incredulous and becoming angry. I took out my nylon wallet and gave them the dollar. They searched it for more, then had me pull my empty pockets inside out, so they could see the whites, as if it was a technique they had learned in robbery trade school. Then they took off my baseball hat and searched the headband. They told me to open my bag. All that was in it were some pens, a notebook and a Scribner’s edition of A Farewell to Arms.

There really wasn’t anywhere else to look besides my underwear, a fact not lost on them. They were either going to have to end this or stab me. They argued about an underwear search. Then the leader issued his decision: “Get out of here.” I walked off, wondering was this really how it was going to end, were we going to just wait for the next train together? By now more people had come down onto the platform from other parts of the station. I walked out of sight and up the stairs to the mezzanine level of the station so I could find a pay phone and call 911. I would do it as a matter of civic duty; we all knew the city’s crime was beyond the control of its police.

That feeling changed in an instant. Instead of a phone, I got Police Officer Thomas Higdon Jr. He was young, tall, black and very fit. His head was down and he was writing in his activity log. I immediately felt safe and knew it was going to end well. I had never felt this way before in the wake of the city’s menace.

“Officer,” I said. He stopped writing and looked up, sizing me up in his own way. “Some guys just robbed me on the platform.”

It was like flipping a switch. He put his log away and spoke into his radio, saying things I do not remember and did not understand but have since spoken for myself. He asked me to describe the suspects and I did: black, in their late teens or early 20s.

“Do they have any weapons?” he asked.

As he stood there, I could hear a train pulling into the station.

“Sir,” I said, “I’m not a cop and I don’t know how this works but if the train leaves then I don’t think you’ll be able to catch them.”

Officer Higdon had been doing the sensible thing, waiting for backup. I could see him thinking, but I didn’t fully understand at the time that this was a man deciding how much he wanted to risk. Dismay overtook me as the train’s conductor announced the train line and the next stop. Higdon nodded to himself.

“Wait here,” he said. He drew his Glock and disappeared down the stairs. I heard him tell the conductor to hold the train. Then I heard screaming, a lot of it, all from Higdon, about getting off the train, all of you, with your hands up, about lying down on the ground with your arms out, all of you, right now. Cops started streaming into the subway, running at full tilt without hats, wooden batons in hand. Some ran downstairs and others fanned out through the labyrinthine station with its many lines.

It was still mystery to me whether I was robbed by three or four people, a mystery created by the effects of fear. The police kept asking me how many of them there were, but this didn’t make my recollections any more acute. Three suspects were brought up to the mezzanine for me to identify. I nodded, it was them. They were put up on the wall for the search incidental to arrest.

A cop brought a possible fourth person from a platform on another line. He was being hauled in by the upper arm but stumbling and rearing as if he was being led by his ear. A short, black teenager with dreads. He was presented to me for inspection, his eyes welling up with tears, breathing fast and heavy in a panic. He shook his head no, no, no. I shook my head, too.

“Are you sure? You told us there were four,” the cop said.

“Three or four, I don’t remember. But this isn’t one of them.”

The cop let go of him and he walked off the way he came. I would later learn that this isn’t what you are supposed to do. You hold the suspect where he is, and bring the victim over to make an identification. When descriptions are broad and time is of the essence, you cast a wide net. This is perfectly acceptable policework. Bringing the victim to the suspect, however, respects the dignity of an innocent person who would otherwise be hauled through a subway system at midnight, scared and in the relentless grip of the police.

The sergeant running the scene brought a knife over to me from the three kids being searched on the wall. “Is this the knife they robbed you with?”

I was waiting for him to comment on the irony of this, but he was unfazed. A cop produced a dollar bill from a kid’s pocket, and they gathered to examine it under the mezzanine’s fluorescent lights as if it held clues beyond its simple production from the pocket. An officer handed the sergeant something else and he walked back to me with it.

“How about this? Was this the knife?” It was a switchblade with a black handle and a silver tang, the one that robbed me of all of my own knife-wielding courage.

The sergeant pressed the action on the handle. The blade was plastic and had tines. It was a novelty comb.

By late 1997, both Tom Higdon and I were pulling suspects off of trains at gunpoint. He was promoted to detective in 2008, on the same day I was promoted to captain. I saw an elderly man struggling to make his way through the crowd in the auditorium at police headquarters. I told a lieutenant to provide him with an aisle seat. It turned out to be Thomas Higdon Sr. In the intervening years, his son had filled out the way NYPD investigators are known to, sitting as they do for hours at metal desks pounding out case files. He looked like a street cop out of central casting when I first met him and now he looked like a detective from NYPD Blue. Almost 15 years after we met on a subway platform in the aftermath of a switchblade comb robbery, our families were celebrating our promotions in the New York City Police Department.

Spring 3100 is the NYPD’s internal magazine. It memorializes our deaths at the end of each issue. At the close of 2009 I came across a memorial for Detective Thomas Higdon Jr. He had died from pneumonia in late October. It is such a big agency that a man you know can die and you’ll only find out by reading about it weeks later in our in-flight magazine. They have a scholarship in his name at the Catholic school he attended. His parents outlived him. I will always remember him from 1993, handsome and at the height of his powers, patrolling the subways alone, staving off chaos in the city, a hero to me through my college years, the reason I became a cop.

Excerpted from Brandon del Pozo’s forthcoming memoir, to be published by Farrar, Straus and Giroux in 2019. All rights reserved. CAUTION: Users are warned that the Work appearing herein is protected under copyright laws and reproduction of the text, in any form for distribution is strictly prohibited. The right to reproduce or transfer the Work via any medium must be secured with the copyright owner.