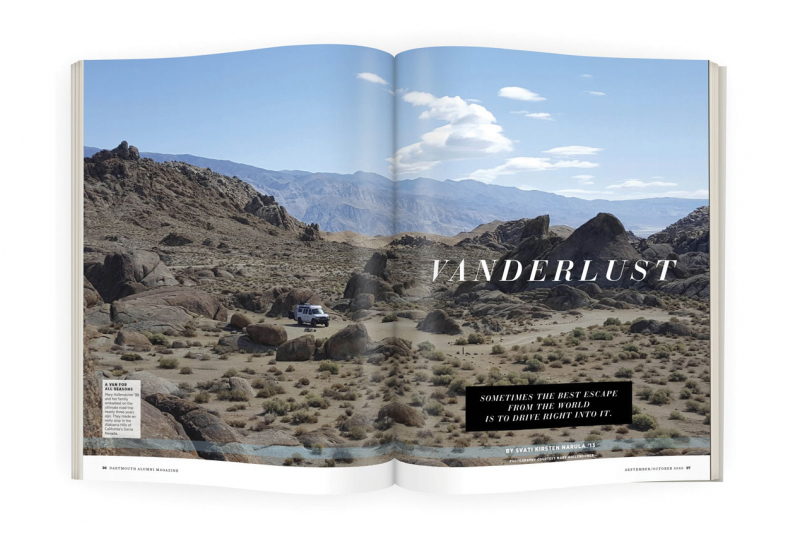 Regarding “Vanderlust” [September/October], what a delightful and beautifully written article! I, too, would love to spend time traveling the world in an RV. Thank you so much for such an uplifting piece, and all the best to the family as they continue this marvelous adventure.

I deeply appreciate “Black Lives Shattered” [September/October] by Tracey R. Gainor ’96 about her brother, who called the police to report a crime and wound up killed by police, a loss that she has had to carry her whole life and feel ever so strongly with each year that passes. Thank you for publishing it, and gratitude to her for sharing a very personal story and tragic loss publicly. It brings it home again. We cannot forget all that has been happening and continues to happen in our country.

I am saddened by comments made in some of the letters referencing Blake Neff ’13 [September/October]. Some seemed to suggest the desire or need for censorship. Thought control is the weapon of demagogues (McCarthy) or Nazi or Communist regimes. In this country there is freedom of speech (even if offensive) and freedom of the press. Our colleagues have every right to express themselves and even sermonize, but they do not have the right to dictate DAM editorial policy. To the editorial staff of DAM, I say resist intimidation, however loud. To the aggrieved alumnae/alumni, I say be charitable and resist your illiberal urges. Remember it was during the 1953 Dartmouth Commencement that President Dwight Eisenhower made his once-famous anti-book burning remarks. Reflect on—and take pride in—that.

It is difficult to avoid seeing 19 consecutive letters on the same subject, offering little or no substance but numerous adjectives that were largely unheard of 65 years ago when I was a freshman. These adjectives—racist, sexist, homophobic, xenophobic, misogynistic, among others—do not present evidence of Ivy League educations. When we were freshmen most of us didn’t think we were in a position to call others by such vile epithets. We had respect for faculty and alumni. John Sloan Dickey told us, “Your business here is learning,” and most of us took that to heart.

Editor Sean Plottner’s statement that the television show Tucker Carlson Tonight has “enormous influence on the president of the United States” [“A Note to DAM Readers,” September/October] is baseless conjecture. First, it suggests a knowledge of President Trump’s television viewing habits, which Mr. Plottner is unlikely to have. Second, it is extremely doubtful that any television show has enormous, if any, influence on President Trump.

Editor’s Note: Trump is on the record as saying he views Tucker Carlson Tonight.

Off the Deep End

I was stunned and deeply disappointed to learn of the decision to eliminate swimming and diving at Dartmouth [“Varsity Blues,” September/October]. My first thought, as a former Big Green swimmer, was of the many deserving scholar-athletes who won’t have the chance to experience what was for me the most influential part of my time at Dartmouth. But I now realize it is bad for Dartmouth as a whole. This decision by President Hanlon and Athletic Director Harry Sheehy wasn’t about strained finances, inadequate facilities, or weak coaching. It was about giving more admissions spots to non-athletes and to athletes on teams with better winning records. Student athletes at Dartmouth are academically gifted, well-rounded, and go on to achieve great things after they leave the College—in addition to being serious, talented athletes. I absolutely agree that athletes should strive to win. But the ultimate lessons learned go beyond that. Reducing the number of exemplary scholar-athletes in favor of separate consideration for scholars and athletes makes Dartmouth less of an Ivy League school and more like the two-tiered systems in the vast majority of “big-time” Division I institutions.

Dartmouth’s recent decision to eliminate five varsity sports is short-sighted and divisive: 110 dedicated, passionate, well-rounded student athletes were sacrificed for the stated goal of reducing the number of recruited athletes by 10 percent. Many Dartmouth alums who are appalled fully support admissions’ goals to give more spots to Black, Indigenous, and other minority students. But why do you need to cut five teams to achieve this? Dartmouth can find a better way, without blindsiding and tearing the hearts out of current and aspiring student-athletes, their families, and alums. In addition, swimming and diving supporters believe the recent eliminations have an outsized impact on the Asian American and LGBTQIA communities. Let’s find a more palatable strategy to achieve the laudable goals of achieving a more diverse and talented student body.

Editor’s Note: The writer was co-captain of the women’s swimming and diving team in 2004-05.

A few days ago I was wading through my attic, home of many memories and artifacts, when I came across the DAM of January/February 2003. On the cover were the words, “A Growing Concern,” and the illustration showed a modest colonial house being engulfed by the dark shadow of Baker Library. My mind popped back to our 50th (“old duck”) reunion, when an informational letter was sent around telling of the changes in the school since our pea green days in 1953. The item that sticks in my mind said that in that time more than 50 new buildings had been put up by our small College. Mein Gott: 50! A couple of years ago a survey of all Ivy League schools showed that Dartmouth had the highest percentage of students whose families earn more than $600,000 a year. Gone are the days when a professor named Kemeny came riding out of the math department to become president and talk about scholarship, intellect, and meritocracy rather than bricks and mortar and the Dow. He wasn’t president for long, but he pushed through some changes, woke up some elderly snoozing faculty, and tried to make the school worthy of the words “liberal education.” Look what happened: What was once a playpen for sons of the rich is now a playpen for their sons and daughters, and a small New England town is little more than a memory.

I trust my three dearly loved biracial grandchildren will not think me a bigot for expressing my strong displeasure at the removal of the Baker Tower weathervane [“Winds of Change,” September/October], but I think it’s an example of revisionism carried too far. Shall we next crash the Washington Monument because it celebrates someone who owned slaves in a time when few considered that practice as offensive as all decent people do today?

The cancel culture strikes again. How many millions have passed by the weathervane atop Baker Library and either not noticed it, ignored it (if they could see it), or felt proud of the original intent? There must not be enough to keep some of the students busy, and they must have binoculars. When people don’t view our history, warts and all, and keep trying to make a more perfect nation, we have lost one of the great principles of education. The cancel culture is a slippery slope. Soon we’ll be left with nothing more than the modern art that has popped up like mushrooms on campus.

Taking down the weathervane from Baker Library: an example of political correctness gone wild. Native Americans getting an education—what’s offensive about that? Native Americans have been welcomed at Dartmouth since its inception; dozens are still welcomed, many with full scholarships. How many other schools can claim that? If the vane must be replaced, let it show a Native American shaking hands with President Wheelock, both at the same height; let it feature a book, and a pine tree, and “Vox Clamantis in Deserto.”

Would it not have much easier just to send a welder up to the weathervane and cut off the images of people? Perhaps we could have replaced them with another tree or a football.

I am disgusted by the political correctness going on and especially with the lack of backbone by the administration in taking down the weathervane after all these years. Not the college I remember.

By giving in to a minority’s demands, Phil Hanlon made the student on the weathervane more important than the teacher. But the real crime is the desecration of the founder and first president of the College by the 18th president. Hanlon’s treatment of Wheelock as a throw-away nonperson was quite frankly disgusting. This represents yet another assault on our beloved College’s history and traditions in an ongoing, egregious effort by this administration to either permanently alter or totally obliterate them. Is the administration confusing symbols with substance?

I enjoyed “The Professor Was a Spy,” the charming account of Went Eldredge ’31 in World War II [July/August]. Not only did his students not know of this chapter in his life; neither did this faculty colleague. Went, government professor Frank Smallwood ’51, and I chaired the interdisciplinary urban studies program at different times. We worked closely, and I was honored as a junior faculty member to write a chapter for Went’s edited book, World Capitals. Knowing this urbane and humorous man as I did, I would not have guessed of his derring-do, but another colleague of ours may have been richly informed. Mention in the article of a map room Went rigged as part of the “Ghost Army” deception to fool German intelligence may have engaged faculty member Van H. English, who devised fake maps of Allied troop concentrations and invasion routes. Van never let on that he and Went had collaborated, but the secret is now out: Dartmouth faculty members (and Went’s courageous spouse, Diana) helped win the “Big One.” Thanks, Rick Beyer ’78, for this delicious revelation.

Not in a Bubble

Regarding the letter by Kristin Young Christman 90, “Why Conform? [July/August], it seems that she has many fond memories of her time at Dartmouth, as do I. The relations with fellow students and the faculty were absolutely one of the main benefits of the “College on the Hill.” However, I fear she missed the larger picture. Dartmouth students do not live in a bubble. Even if her 0.02-percent death rate from Covid-19 for those in the 10-to-39 age group is correct, they should never be our only concern. Many faculty and staff are way out of that age group and many also have underlying conditions that make them much more vulnerable to Covid-19. Students go into town to shop, eat, drink, get a haircut, watch a movie, etc. The students pose a risk to elderly citizens and all town members who pursue the same activities. Those 80 percent who experience only mild systems, along with 100 percent of those with the virus, are capable of spreading the disease to all they encounter, even if they have no symptoms. The threat of suicide is always present, but I do not see that threat increased by the necessity to limit this virus. To beat this virus we all must make sacrifices. I have no doubt that Dartmouth students are capable of doing whatever is necessary to maintain the health of the country.