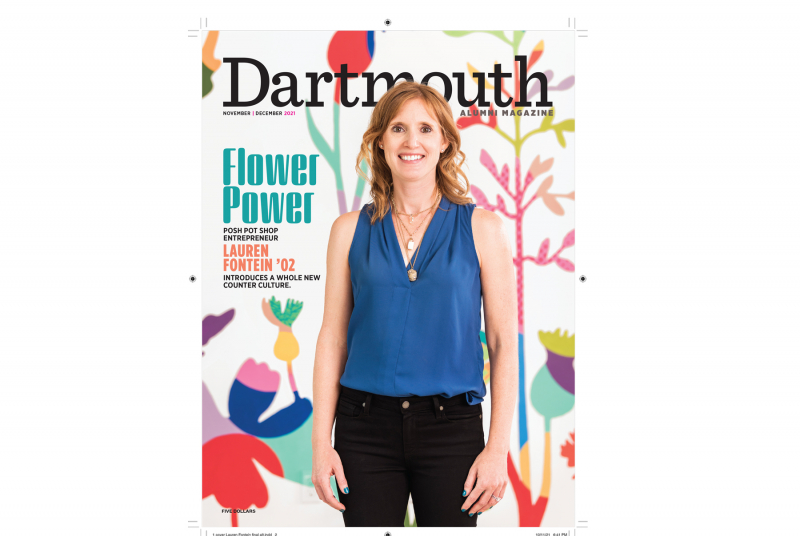 Buzzkill
Regarding the article about cannabis retailer Lauren Fontein ’02 [“The New Counter Culture,” November/December 2021]: While I am fairly libertarian in my views on drug policy in the United States, I am a physician and understand that marijuana (or the THC in it) is not a completely benign drug, as it tends to be portrayed. While I am not necessarily against the legalization of marijuana, I do think there should at least be warnings about and further study investigating its potential dangers, as there are on cigarettes and alcohol, and I do not think we should carelessly celebrate it on the cover of our magazine. Nor do I see why we should hold someone who makes money off of other people’s vice in such high regard. There must be alumnae out there who are doing more virtuous things deserving of our attention.

Fontein is quoted as saying “There’s still a stigma against cannabis use.” It’s more than stigma. The National Institutes of Health National Center for Complementary and Integrative Health lists a dozen concerns about cannabis. I don’t think cannabis use should be treated as criminal—just foolish.

I Want to Believe
It is refreshing to find that John White ’61 [“Continuing Ed,” November/December 2021] is, too, a lifelong researcher on the fascinating and elusive topic of UFOs. His bullet points in your interview demonstrate the serious depth of his seven decades sifting the wheat from the all too prolific chaff published to the all too unready and indifferent public.

I Don’t
I am disappointed by DAM’s decision to publish the interview with White, which was little more than a recitation of an absurd conspiracy theory with no more grounding in reality than those who believe the earth is flat. Mr. White may be sincere in his beliefs, but he does not deserve a platform to broadcast these dangerous views to other vulnerable people. Civic society and level-headed politics rely on us operating from a common picture of reality. Conspiracy theories that falsely claim political elites are exploiting children can result in violence. Journalistic outlets such as DAM have an ethical responsibility to not spread this sort of nonsense.

Golf Flub
I am disappointed and unsurprised that your article on Hanover Country Club [“Missing Links,” November/December 2021] did not explore the reasons for and the tragedy of the College closing HCC in the midst of a nationwide golf boom. People have played golf on that ground for 121 years. The College mismanaged it so much that leadership simply closed the course and the club. Lest the old traditions fail, indeed!

Editor’s Note: DAM reported on the golf course closure in the May/June 2021 issue.

Friday Night Lights
On November 5, a Friday night, I turned on the TV and up came the Dartmouth-Princeton football game. It was the second half, and Dartmouth had a good lead ahead of the undefeated Tigers (and won 31-7). The camera swept the stands and it appeared that no more than 100 spectators (not sure how many were students) were in attendance! This game potentially was for the Ivy League championship. A couple of thoughts: Why were millions spent putting in lights for Friday night football (that’s high school night), and where in hell were the fans? Has college spirit changed that much?

Credit Due
Jim Collins ’84 discusses how changes to the NCAA’s endorsement rules could impact Dartmouth athletes [“Moneyball,” November/December 2021]. Whether Dartmouth’s skiers, rowers, and soccer players have enough Instagram followers to profit from their talents perhaps misses the most noteworthy aspect of this monumental rule change. Dartmouth’s own Seth Rosenthal ’89 (a baseball and rugby player in college) was one of the lawyers responsible for provoking the NCAA to remedy generations of exploitative practices under antitrust law.

In 2014, Seth was one of a team of five lawyers who successfully tried O’Bannon v. NCAA, which determined the NCAA violated the Sherman Act by conspiring with its member schools to bar college football and basketball players from receiving compensation for use of their names, images, and likenesses in TV broadcasts and video games. It was the first decision holding that NCAA rules prohibiting athlete compensation are subject to antitrust laws and, correspondingly, the first decision to call into question the idea that the so-called principle of “amateurism” could justify the NCAA’s ban on athlete compensation.

We certainly wish Dartmouth athletes any compensation they deserve (and, of course, many Instagram followers). But the real power of this story lies in the brilliant legal work our friend and classmate did to protect the tens of thousands of young athletes in schools and universities across the country with a far less secure future than Dartmouth may provide.

I feel there is some disconnect between the College’s policy prohibiting Hanna Utter ’21 and other student-athletes from using Dartmouth logos, uniforms, or facilities to promote the sale or use of cannabinoid products, while the same issue of the DAM featured a cover story extolling the success of pot entrepreneur Fontein.

Too Basic
In 2020 the Dartmouth administration completed a 64-page booklet about the College’s “Strategic Master Plan” (two years in the making), calling it “a guide for our physical campus on a 30-year horizon” [“Framework for the Future,” November/December 2021].

The booklet itself states that the plan is not a guide of what should be done to move Dartmouth forward as a first-rate college in its own vision or as competitive with other Ivy League institutions and top-rated colleges and universities. Rather, it provides only a series of how-to alternatives, should Dartmouth decide to expand its campus to include more educational, research, dormitory, parking, and green space. Clearly, Dartmouth must first decide what it wants to be, where it wants to go, and when it wants to get there before it explores how to get there.

Both the DAM article and the study discuss the extensive input from a “wide variety of constituencies.” However, the 57 people appointed to three separate committees to work with outside consultants consisted almost entirely of Dartmouth administrative personnel and faculty members. Are these Dartmouth’s only constituencies? Shouldn’t interested alumni and students also have been represented?