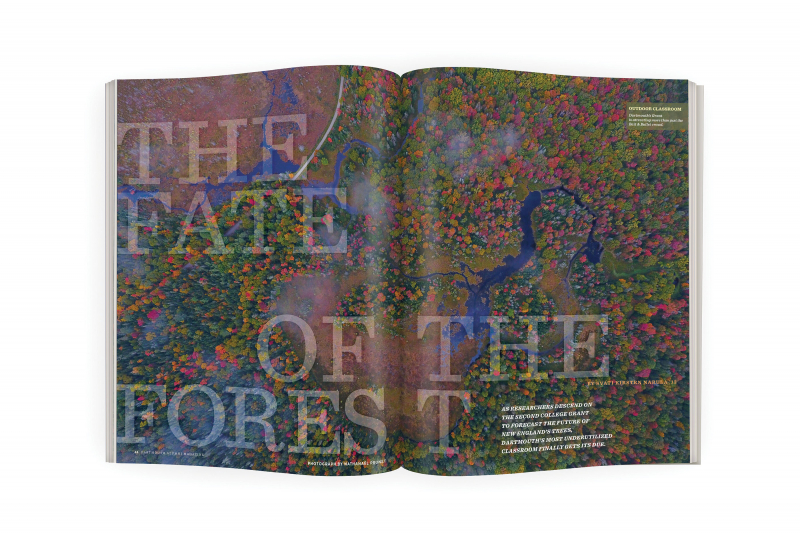 Deer Reader
I read with interest the article “The Fate of the Forest” in the January/February DAM. Basic and applied research is the lifeblood of informed management of forest resources, and I applaud the research established on the Second College Grant’s 27,000-acre forest, especially as it applies to potential impacts on trees wrought by global warming and climate change. However, forests are composed of more than trees. Understory plants, including seedlings of threatened tree species, shrubs, and herbaceous vegetation—and the habitat they provide for a wide variety of wildlife species—are also at risk.

More than climate change threatens forest biodiversity, and the elephant in the forest (as identified by Putnam Blodgett ’53, Tu’61, in his interview in “Continuing Ed”) is the pervasive impact of too many deer on forest vegetation, including tree seedlings, grasses, ferns, and forbs (wildflowers) and the wildlife species (birds, mammals, reptiles, amphibians, and insects) dependent on understory and overstory vegetation.

I recommend that the College include the influence of deer on the trees and other forest resources in its long-term research and management of the forest. As a long-term researcher and manager of deer across a wide swath of America, including New England, I can unequivocally state that fencing, use of chemosterilants, and reintroduction of native predators are ineffective or not feasible, and that the only way to control negative deer impact on forest resources and biodiversity is by population reduction through public hunting.

Alive and Happy
Please know that the January/February edition of DAM was, simply, delightful. For the first time in decades I read every article (skipping only the younger class reports). The highlight? Not seeing my name in the obits. I apparently woke up not dead again. And the absence of fundraising material was a delight.

It reaffirmed why I cherish my Dartmouth and Tuck experience.

And, indirectly, it chided me for voting against coeducation back when.

Can’t Put “Put” Down
How nice to read the profile of Put Blodgett. What the profile missed was the incredible formative influence he had on the boys who attended his Challenge Wilderness Camp in Bradford, Vermont. I worked for Put at the camp, and the stories were legendary. I particularly remember how Put detested hearing anyone say, “Take it easy,” in parting. Put never took it easy!

Here and There
I agree that “Shanghai’s decrepit but rigorous public schools offer U.S. educators an unlikely blueprint for improvement” [“Learning Curve,” January/February], but for almost opposite reasons I reach an opposite conclusion than offered by Teru Clavel ’95.

In numbers so large that their central government is now cracking down, Chinese students have been flocking to U.S secondary schools in hopes of gaining entry into U.S. colleges and universities. They want out of the rote learning-and-recitation model and into the world of classrooms where student bodies are diverse and in which critical thinking is encouraged. Their parents are willing to pay more than $30,000 per year to access the Western model.

In Shanghai it is routine for Caucasians to be hired as window dressing—private schools recruit students with the pretense that children will receive a Western-style education.

Shanghai is China’s showpiece, but it’s a Hollywood movie set with little behind the façade. As Clavel reports, off the city’s main thoroughfares, school buildings are far from first-class. Not reported is that in the small towns and villages of China’s midsection and farther west, education has Third World status.

All across the country (including Shanghai), China ignores those for whom the United States is committed to providing a full and free education—physically, mentally, and emotionally challenged children and adolescents.

Pool Report?
As a former Dartmouth swimmer and overall sports enthusiast, I am regularly disappointed by the lack of news about the school’s teams. There should be a segment of the magazine dedicated to the subject in each issue. In the recent issue there’s a picture of the football team running onto the field [“Big Picture,” January/February], but that’s all. That doesn’t count as news.

You can do better.

Seussville
I started my Dartmouth career in the fall of 1957. I had grown up in Southern California and had never heard of Dr. Seuss and all his characters. When I returned home for Christmas holidays, I scolded my mother for depriving me of the Seuss experience. Although I had lived among other civilized kids, I had the impression I’d been hidden away in some backwoods forest.

The article regarding the Grinch [“You’re a Mean One, Mr. Grinch,” November/December 2019] brought me back to the day I discovered Dr. Seuss. Now I read all those stories to my grandchildren and tell them Dr. Seuss was in my class at college—well, sort of.

Truth and Virtue
“Dartmouth is creating—in our graduates—an army of experts and independent thinkers,” wrote President Hanlon under the headline, “Nothing But the Truth” [November/December 2019]. After voicing a complaint with today’s society and asserting that to advance society we need experts, Hanlon declared, “We must not relent in our commitment to elevating the values that characterized the Age of Enlightenment and are, today, at the core of a Dartmouth education: respect for open-minded inquiry, evidence, logic, and reason.”

The authority on the Age of Enlightenment’s ideals, Immanuel Kant, defined the age as “man’s emergence from his self-imposed immaturity. Immaturity is the inability to use one’s understanding without guidance from another. This immaturity is self-imposed when its cause lies not in lack of understanding, but in lack of resolve and courage to use it without guidance from another. Sapere aude! [Dare to know!] ‘Have courage to use your own understanding!’—that is the motto of enlightenment.”

Perhaps the time has passed for guidance and tutoring from Aristotle, Aquinas, and Eleazar. Under the Enlightenment’s banner, human beings are emancipated from the past and each other, Kant explained, but not from the law: They obey the law of reason, the law that they give themselves as rational beings and experts, the law of autonomy.

That is the Enlightenment’s truth and Dartmouth’s core value, its tool for creating an army of independent experts—an army of ones—in which everyone uses his or her own understanding to advance society expertly.

Still, those who understand humans to be rational as well as religious and political animals may wonder about the fullness of the Enlightenment’s truth and the virtue of Dartmouth’s army.